In the interview that is recorded in Bakemonogatari's official guide book......

Nisio Isin: I have a question that I want to ask as well. In the future, what sort of characters does Hanazawa-san wish to tackle?
Hanazawa: I wish to take on the role of those characters with a very bad personality. As I had not acted for a really evil character before, I wish to challenge that at least once.
Nisio Isin: I understand. Then in the future, the <Bakemonogatari> series will have an evil girl added to it, so please be her voice actress as well. Or, I can write Nadeko as an evil girl - such a plot isn't too bad either.
Hanazawa: Which means to say that she will become 'Dark Nadeko'. *laughs* Please do that. 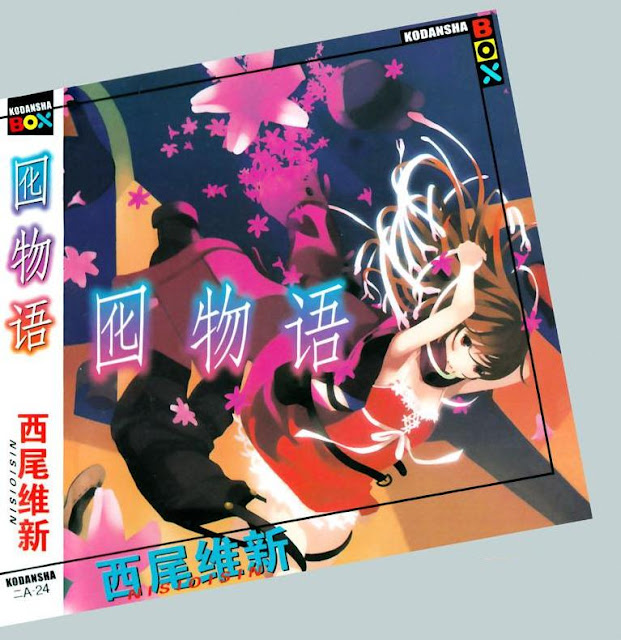 And I guess, that is how the plot of Otorimonogatari came about. Nisio Isin fulfilled Hanazawa's wish, and Nadeko turned into a sort of yandere + FINAL BOSS of the Monogatari series.

The book is narrated from Nadeko's point of view, and details on how she turned into medusa-mode. Which means to say, that Otorimonogatari's story did not really end by the end of the volume, as compared to the earlier volumes. It will probably continue in Onimonogatari, Koimonogatari, or both.

I am lazy to summarize it, so I'll just link this here: Link to summary done by Omimon

Well here's my thoughts for this volume.

Firstly, contrary to what I had originally expected from a story told via Nadeko's point of view (if Nisio Isin chose to do it that way, which he did), the novels are not filled with the overwhelming cuteness you will expect from Nadeko. Instead, I think one can say that this volume may actually surprise many by what Nadeko is actually thinking all these while. Then again, considering how much of an introvert (and rather ecchi) Nadeko is, it is not something too unexpected and shocking. But be prepared for your perfect image of Nadeko to be shattered into pieces, when Nadeko's emotions broke past the threshold point (due to her jealousy and etc), and she went dark mode. In a sense, we get to see what sort of girl Nadeko really is, and the various explanations for her actions and psyche. But yeah, I don't think it will goes down too well on some Nadeko fans. Not that it matters to me, since I am a Shinobu-convert for quite a while now.

Compared to what I feel is a rather disappointing volume in the previous Hanamonogatari, Otorimonogatari is something much more interesting. However, since Hana takes place at the time-line way after Otori (Hana takes place when Senjougahara is at the university already), there are some hints as to how the plot may end:
1. Koyomi, Senjougahara, Araragi sisters, Hanekawa and Kanbaru are still alive, with Koyomi and Senjougahara still as a couple.
2. I may be wrong, but I don't remember any mentioning of Nadeko in Hanamonogatari.
Which means to say, Nadeko may have disappeared from their lives or something. Dead? Changed into an oddity permanently? Erased from memories? That's something to find out.

Next, Oshino Meme and Oshino Ougi's true identity is becoming increasingly confusing and shady. Ougi had appeared in Kabuki, Hana and now in Otori, taking on different sexes when meeting with different characters, and introducing him/herself as the nephew/niece of Oshino Meme. I had originally thought that Ougi is something like a Shikigami of Meme, but now I can't be too sure. Also, the seal that Nadeko and the seal that Koyomi used to save Nadeko in Bakemonogatari was created by the same onmyoujii over a thousand years ago. Is that Meme? If not, who? Either way, they are definitely holding an important key to the story.

Now moving onto the other characters. A monogatari novel these days will not be complete without the scenes of bro-con and sis-con Araragi siblings. I've always liked Tsukihi more than Karen ever since Bakemono, and in Otori, she did not disappoint. Neither did Koyomi. And after two volumes of absence, Senjougahara finally made a comeback, albeit only at the end of the novel. Still, it is great to see her as feisty as ever, which is great. Being a Shinobu fan, I had also enjoyed Shinobu's jealously towards Nadeko.

One thing to praise Nisio Isin for: he had brought out the distinct personalities of the characters really well while narrating in their point of views. I had no trouble convincing myself that the person narrating is really Nadeko, just like how I felt Hanekawa's narration had suited her perfectly - unlike those that I had read from say, Hitoma Iruma's characters in Denpa Onna. Nadeko's pov was just a tad bit inferior to Hanekawa's, and better than Kanbaru, but in no way are any one of them a bad piece of work. It kind of brings out much more character development, which I enjoyed.

So to conclude, while Otorimonogatari starts off a little slow at the start, things pick up rather fast towards the end. It is an enjoyable ride, but since it is just setting up the plot for the next two volumes and have no solid conclusion, I can't really say how good the story actually is as for now. I must admit I quite like the mouth-watering prospect of Nadeko fighting against Koyomi, Shinobu AND Senjougahara though. Also, that will not stop me from updating the ranking list of the currently released monogatari novels, according to how much I had enjoyed them, from the most enjoyable to the least (though none of those are bad):

Kabukimonogatari is still the god-tier work of the series, and I can't wait for Onimonogatari. Hopefully, I'll not be disappointed, because I had high hopes for it after reading Kabuki. Also, I wonder if Hanazawa will actually get her wish fulfilled and ever have the chance to voice Dark Nadeko?
Posted by zgmfx09a at 2:31 PM