The pain seems to go deep into the marrows just by being drenched by it. It was as though crystallized ice had rained down...... That was how icy the downpour was.

The crazy torrents were like tears of heaven, that nearly chiseled through the roofs. From the surrounding came the sound of rumbling water, which had exceeded what should be the sound of rainfall - calling it a waterfall would have been more appropriate.

For how long had it been raining?

The rainfall from the distant borders of the sky had already broken all previous records. However, the rain did not seem to be waning at all.

On the dark road in night, appeared a tiny ripple.

Accompanied by the roars of the rain, the public lights shone on a certain object. Beneath the blurry lights, crawls a black shadow on the road filled with water.

—It was a teenage boy.

Approximately fourteen or fifteen years-old. His tea-red colored hair that is close to purple, reflected the brilliance of the night lights.

The teenage boy let out a soundless moan, and continued crawling in the icy downpour. What looks like a ceremonial coat was already in tatters, revealing his skin drenched in blood.

A sound of burning was mixed between the sounds of the rain. On the road where the teenager had crawled past, the trail was slowly dissolving as though it was splashed by corrosive acid.

A thin layer of dark purple mist envelops his body, suggesting that they were the cause for the strange happenings. It was like his body had been controlled and cursed by some unknown things.

For a typical person, he probably could not have survived. But the teenager continued forward.

He dragged on his dying body, and willed it inches forward, again and again.

His destination was an empty public shed in front of him.

If he could reach there, he could perhaps shelter himself from the stabs of the icy rain. Even for his bleeding wounds, he would have to treat them there as well.

Two meters. At a distance where he was just within reach at the shed's door, the teenager could hold on no longer. He collapsed head down into a puddle on the road.

Huge amounts of blood flowed out with the rain. His face was buried in the muddy water.

The teenager did not wipe them off - his whole body was just lying there motionless. No, he could not move. The huge amount of blood lost together with the icy downpour had caused him to be unable to move any longer.

On the dark road at night, came yet another tiny ripple.

Beneath the lights that are illuminating the roads, a silhouette of a person appeared.

Hearing the footsteps, the collapsed teenager lifted his head faintly.

It was silhouette of a person who was wearing a tight-fitting vestment despite the freezing night.

As the lights were not strong enough, one could not make out the appearance of that person in detail. However, from the voluptuous curves as well as the seductive figure, even a child could have recognized that the person was a female.

"—Welcome back to the floating continent - Orbie Clar."

The lady looked into the sky, her luscious lips gave a slight smile.

She was a young lady. Judging from her voice, she may not even be twenty-five yet.

Before the rain drops could touch her, they  bounced away from the lady's body which was shimmering in light.

As though there was an invisible barrier of light that separated her from the rain.

With a pair of eyes that had lost their focus, the teenager looked at the lady in front of him. 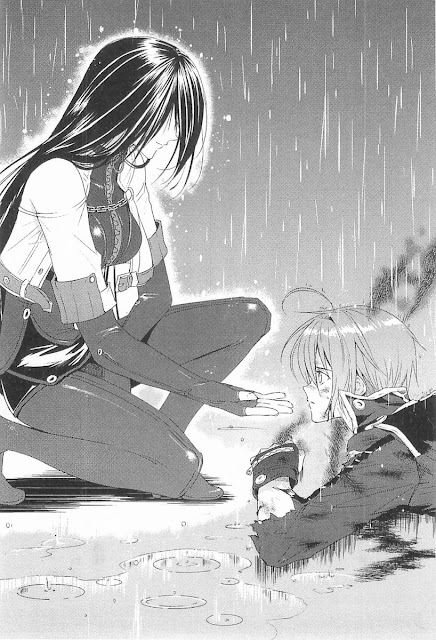 "Ah, you do not even have the strength to reply?"

The lady stretched out her hand towards the teenager. At that instant-

Azure sparks similar to lightning burst forth between the two of them.

She reflexively retracted her hand, but her fingertips was already left with what looked to be burnt scars.

Upon seeing the scar-

In the darkness, the lady laughed lightly.

"Your body is filled with mateki from 'Garden of Corrupted Song <Eden>' - and your mateki is strong enough to actually be on par against me. It looks like you had fallen into a really deep level."

The body of the teenage boy gave off a strange black smoke. The lady looked at that lovingly, then reached out for the teenager with her hands yet again.

The teenager suddenly shrunk away. Upon seeing that, she gave a bitter smile.

"You fear rejection subconsciously - that is a normal reaction. However, you do not have to worry, at least for now. I have done something so that even if we are to come into contact, there will be no chance of repulsion. That is to say, if you are bearing any ill-intention towards me, I will not be able to defend myself."

The teenager maintained his collapsed state, and lifted his head to look at the lady.

His pair of blue eyes gave off a shimmer of light, as though they were trying to say something.

"I see, it looked like I was in too much of a rush just now. That's right, your sole intention of returning is so that you can see her again."

Looking into the teenager's eyes, her expressions became gentle for the first time.

With a gentle expression close to a light smile, as though she was a mother welcoming the return of her child.

"I just wish to ask you something. To which level of Garden of Corrupted Song <Eden> had you fallen into? The Fifth Mirror? Or the Sixth Mirror? Or, had you heard 'that song' which only flows in the deepest areas?"

Upon being asked that question—

The teenager, who had been silent all these while, opened his mouth weakly. However, he did not have the strength to speak. His half-opened mouth only managed to croak out faint breaths.

"You wish to answer but your body does not allow you to? Well, it does not matter. You will understand soon enough."

She brushed her black hair with her hands, which was still dazzling despite being in the dark.

"My name is Tsali. You do not have to remember it now. One day, you will be hearing my name frequently. So for now - allow me to welcome your return once again."

A flash of light shone from deep within her amber eyes. The lady who addressed herself as 'Tsali' grabbed hold onto the teenager's hands tightly.

"I welcome you. Oh young man, who had fallen into the Garden of Corrupted Song <Eden>, and returned back to the floating continent. For a thousand years, the frozen paradise have always been waiting for you—"

On that night, floating continent - Orbie Clar had recorded the one heaviest downpours in history, something that was rarely seen.
Posted by zgmfx09a at 6:39 PM