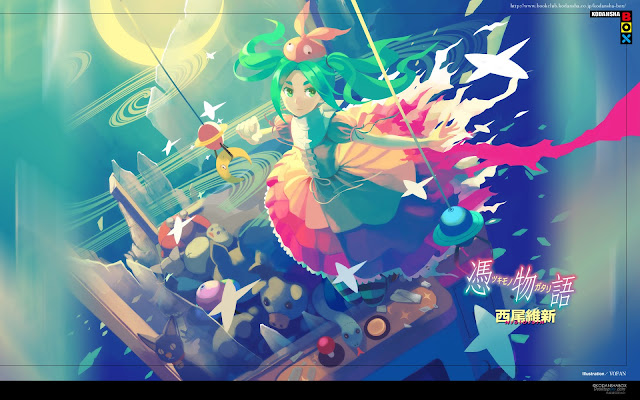 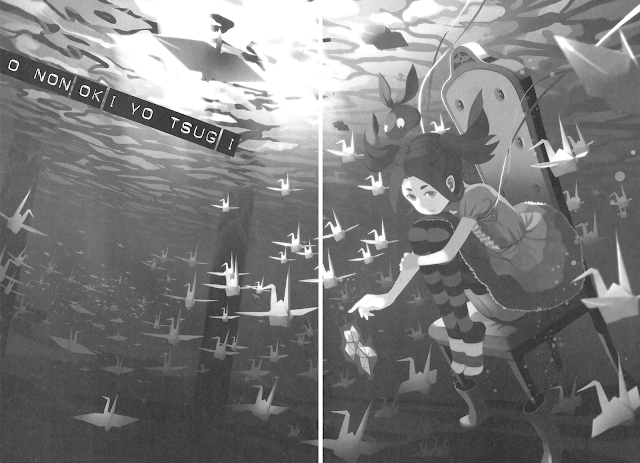 When I first saw the cover for this volume, I thought the story will be narrated by Ononoki. Well, it's not like I don't enjoy reading the monogatari series under a different narrator (Kaiki in Koimonogatari was a pleasant surprise), but I don't really think Ononoki will make an interesting narrator and all. Turns out it's Koyomi who's up for the task, so all's good.

As per any volume narrated by Koyomi, it just feels a little off if we are not showered with a gratuitous amount of fan-service. And so the volume begins on 13th Feb with Koyomi complaining (or more like bragging) about his alarm clocks which are actually his two little sisters.I should mention that Karen wears a small ponytail now, while Tsukihi's hair as long as her height. Also, Araragi tried licking Karen's foot, but he did not elaborate if he succeeds.

Karen then went for her daily morning marathon run, so Koyomi went to the bathroom to prepare a hot bath for her under her orders. But of course Koyomi, being Koyomi, decides to take a bath in the water to "test the temperature" (which I interpret as mixing his essence into the water). And it just so happens (what a coincidence) that Tsukihi came barging in half naked expecting a free ride using the heated waters prepared by her dear onii-chan. Both of them refuses to give in, so Tsukihi came up with the brilliant idea of them bathing together. Koyomi, with his elder brother's pride on the line, was forced with no choice but to agree to it.

And so we have a whole chapter detailing their wild conversation as they washed each other's hair and body in the cramp bathroom (since anime's bathroom is not canon). During the scene, Koyomi suddenly realized there was no reflection of him on the mirror, so he grabbed Tsukihi's head in order to prevent her her from looking at the mirror. Tsukihi, being the dear little bro-con, interpreted that as Koyomi wanting to kiss and gave him the green light as she shut her eyes and pouted her lips. Karen came in the nick of time to send Koyomi flying with a kick. One thing noteworthy is that Koyomi actually declares himself as an expert to the inside of Karen's mouth as well as the softness of her tongue, so interpret that as you please.

So after a brief discussion with Shinobu, Koyomi decides to discuss it with Ononoki. Oshino Meme's nowhere to be seen, Kaiki's not really the expert when it comes to immortals, while Kagenui's someone whom he wants to avoid if possible. As he was thinking of how to contact Ononoki, Gaen the know-it-all sent him a message with details on when and where to meet Ononoki. Before setting off, Koyomi asked Tsukihi to stay overnight at Kanbaru's house together with Karen as well, a measure taken just in case Kagenui appears and things turn ugly. He then contacted Senjougahara and told her everything since he swore never to hide any oddity-related incidents from her (though he still did in the earlier volumes). Took him quite a bit of effort to stop her from coming along with him.

And so, Koyomi went to the place at the stipulated time (7pm) and found Ononoki in a UFO catcher (hence the cover). Took him 1000yen to fish her out. Kagenui then appeared and landed on Shinobu's head, which resulted in Shinobu being humiliated and she ended up throwing a tantrum.

Upon some body checks and etc, it turns out that Koyomi is actually turning into a vampire - not under Shinobu's influence, but because he has vampirized too many times to the point where his existence is becoming used to being a vampire. In short, while vastly inferior to his servant form under Kissshot, he is slowly turning into a real vampire and not a "vampire-made" one.

Koyomi asked if there is anyway of him turning back into human, and Kagenui said there's none. The only thing they can do is to halt the process, and that is for him not to vampirize ever again. Kagenui made him swear not to do it again ever or she may be forced to kill him. Shinobu, being all silent during the discussion, turned hostile and said she'll kill Kagenui if she kills Koyomi (the fight will be inevitable anyway since she will turn back into immortal Kissshot).

Suddenly a message from Gaen asking Koyomi to check out Kanbaru's house since something has happened. Koyomi rushed over with the aid of Ononoki and her Unlimited Rulebook. With his excellent detective skills (he can deduce which futon his sisters are sleeping in just by their scent on the pillow/bedsheets), Koyomi realized they had disappeared. Ononoki said they were probably kidnapped, and the only clue left in the room was a origami crane left in the room, which increased to a thousand of them when Koyomi picked it up.

Turns out the person who kidnapped them was Teori Tadatsuru, an acquaintance of Kagenui who is also an expert in immortal oddities (but not under the influence of Gaen). He requested Koyomi to meet him at the snake shrine. Koyomi went over together with Ononoki, who was there to assist him so as to prevent Koyomi from vampirizing himself.

On his way, Koyomi met Oshino Ougi, who was as mysterious as ever (taking on the female form this time). Seems like she was waiting for him there. After a brief talk, Koyomi continued his way to the shrine. The battle plan was for him to distract Tadatsuru while Ononogi locate and rescue the three girls.

Upon meeting Tadatsuru, Tadatsuru said he's tired of being the pawn in someone's schemes. The series of events which took place recently, including this one, suggests that it is too much of a coincidence for it to be just random occurrences (something Kaiki mentioned in the earlier volumes). Someone is manipulating the strings from behind the scenes, and he does not want to be used by mastermind. He then asked Koyomi to find Oshino Meme as he is probably the only person who can put an end to this, followed by a request for the person he loves to kill him. Ononoki popped out of no where, agreed and used the Unlimited Rulebook to smashed Tadatsuru into dust with her index finger.

Koyomi was shocked at why Ononoki did that. Ononoki said expressionlessly that the reason is because she is a monster - if she did not do that, it will be all over for the human Koyomi since he will turn into a monster.

So 14th Feb, Koyomi realized that the whole incident happened to tear him and Ononoki apart, just like what happened to Sengoku and Mayoi earlier on.

Koyomi's eating the chocolates Senjougahara made for him. He was still a little emo from what happened last night, so he commented that he will probably gather lots of attention if they find out there is no reflection of him on the mirror. Senjougahara replied with a corny but great line, "So what if that is all that happens. Even if Araragi's reflection is not captured by the mirrors, your will still be captured by my eyes." They decided it will still be better to contact Hanekawa since she is searching for Oshino Meme, and Koyomi thought he should do it immediately. However, Senjougahara insisted that Koyomi should to do that tomorrow while putting on a smile.

Back at Araragi's house, Koyomi checked on his sisters' room to see if they are okay, and to his surprise, Ononoki was in the room "pretending" to be a doll. Tsukihi took only three tries to grab Ononoki out of the UFO catcher. Ononoki whispered to Koyomi saying that since it's the mastermind's idea for him and Ononoki to end up on bad terms with each other, Kagenui decided it's best to shatter that plan by having Ononoki around Koyomi. And so Ononoki ends up in the Araragi's sisters' room pretending to be a doll. Or rather, she is one.

All in all, a pretty good volume with quite the development.

Fan-service is great, though it seems like Nisio Isin likes to focus more on Tsukihi out of the two sisters. I'll kill for that bathroom scene. It will be glorious.

We also finally get to see Senjougahara from Koyomi's eyes, though it's a pretty brief portion at the final chapter. She's cute when she did the "Yay!" and victory pose when Koyomi praised her chocolates. Quite unimaginable when I first read Bakemonogatari.

But the most important part of this volume is the fact that Koyomi can no longer turn into a vampire again, or he will risk becoming one permanently. That is actually quite a big deal, because his vampire abilities is something that saves his ass countless number of times, including the two month period where he fought Sengoku almost daily (which ironically is the biggest cause for his existence to get use to the vampire state). That also means that Shinobu will be stuck as a 8 years old loli, since it will require Koyomi to vampirize in order for her to gain some of her vampire powers back (Koyomi is more than welcoming of that if not for the other more pressing issues). Koyomi commented that contrary to the initial period where he is against the use of his vampire powers, he is becoming more and more dependant on them and Shinobu as time goes by. The irreversible vampiric transformation is the price he has to pay for the constant use and dependence of that power.

Shinobu. She has quite a fair share of scenes due to the central plot of this volume, but damn, you can really see her disappointment when Koyomi insists on not turning into a full vampire. She'll not go against his wish for not wanting to become a full fledge vampire and she will aid him in his attempt to stay part human, but she made it very clear she is more than fine with him turning into a real vampire. Right before Koyomi's confrontation with Tadatsuru, she said she will do all it takes to keep Koyomi alive, even if that means her drinking his blood forcibly in dire situations. And those fighting words when Kagenui said she will kill Koyomi should he turn into a full vampire. So loyal. Why is she so perfect?

The stage is also set for Oshino Meme's grand return, I guess. Oshino Meme's pretty much a men's man in Nisio Isin's eyes, and I don't think Meme deserves anything lesser than that. I am looking forward to that and also the appearance of "Neo" Hanekawa. Things should be getting exciting, especially with that final boss looming in the corner. My guess is Ougi, since he/she's a really shady character.

Also, little tidbits that we learn in this volume. Ononoki is actually created by Kagenui together with Tadatsuru, Kaiki and etc. Kagenui and Tadatsuru were under some sort of curse which forbids them from walking on the ground, which explains Kagenui's queer habit of standing and walking on anywhere but land. Can't remember anything else because I sort of cleared the whole volume within a day.

Tsukimonogatari's pretty solid, especially with Koyomi's development. Fanservice's top-notch, plenty of Shinobu, and a glimpse of Senjougahara from Koyomi's POV. Could do with a bit less Ononoki and more Shinobu, but that is more due to my bias. I am not really complaining.

Finally, my updated ratings of the volumes in the series as per usual. Kabuki is still the best after all these volumes.