Mystrael from Baka Tsuki has began work on Tasogare-iro no Uta Tsukai. For those who don't know, it's a series that takes place in the same universe as Hyouketsu Kyoukai, but on a much earlier timeline.

I had said before that you don't really need the knowledge of Uta Tsukai to read Hyouketsu Kyoukai, but the story will be much more interesting with the background knowledge. Especially when Hyouketsu Kyoukai gets into vol 4 onward.


That person was a strange man.

At the green plains of a flat gradient.

The plains can be aptly described with the term 'weedy'. The man was standing on top of the slightly elevated hill which was filled with weeds.

A tall and stout man, dressed in a dirt-yellow robe which colors had already faded.

His eyes were hidden deep within his hood. The long robe stretched from his head to his feet, covering the whole of his body. Not a single part of his body was exposed to the sun - even his fingers were hidden by the sleeves of his robe. Aside from his strange outfit, what was even weirder were the mechanical rings that were restraining the suit.

Located on his neck, shoulders, elbows, wrists, waist and knees.

It's a metallic-colored machine that would give off a glow after each fixed period of time, and they acted like bracelets or belts encircling the various parts of his body. The machines were bound to the body tightly, revealing his broad shoulders as well as those muscular arms.

There was no wind.

The man was standing motionlessly on one spot, just like the still grass around his feet.

Not a single motion.

Not just that. He was perfectly still.

The heartbeats, the heaving of the shoulders due to respiration, and even the most basic movements of a living organism — all of these were perfectly absent.

An unknown amount of time had passed in the area dominated by silence and stagnancy.

A wild gust of wind raged through the plains.

The wild gust of wind.

The cheerful voice of a man rang through the fields at the same time.

The man in the robe who was motionless the whole time then turned around.

"I am really sorry. I saw some evening primrose on my way here, which made me lose track of time."

Said the man respectfully, who was being addressed as "Igun-I".

A black coat adorned with golden buttons and coupled with a black pair of shoes, as well as a black fedora. His white pair of gloves was the only thing out of his black outfit that was retaining the sense of coordination amid the chaos.

Ha— a faint hint of smile appeared on the corners of Igun-I's lips. He pointed towards the back.

"I have found some wild strawberries over there. Their redness made them look really sweet. I am planning to pick some before I start my work. How about you?"

The beauty akin to that of a devil.

His pale golden hair was peeking out of the fedora that was hiding his eyes. His nose and mouth were beautifully shaped. And despite not being able to see his eyes, the overall contours of his face gave one the impression of an exceptionally handsome face.

Coupled with a resounding male treble voice as well as a slender and beautifully shaped body, there was more than just beauty exuded by that man - there was an indescribable devilish charm around him.

"Eh? Leave the strawberries for later, and start on our work first......? You're really impatient, Mr Maha."

"Guess we have no choice. Since the time has come, let us begin now."

As he said that, a giant water tank suddenly appeared next to him.

The cylindrical water tank was big enough to accommodate multiple adults at once. When exactly did he have that prepared? And more importantly, how exactly did he transport it to the plains? The water tank materialized on the plains while Igun-I was speaking — that was the only way to describe what had happened.

However, the man named Maha did not flinch one bit when he saw the supernatural scene. All he did was lift his head to look into the 'insides' of the water tank.

There was blue liquid in there, as well as countless air bubbles created by the machines beneath the tank. And amid them, floated an 'object' that was shrouded in dark purple mist.

"This is a Yuugenshu. As you can see, it is currently forced into a slumber due to the barriers of shinryoku."

As he looked upwards at the dark purple beast, Igun-I continued speaking in that shifty voice of his,

"Speaking of which, the time of its capture is not too long ago, at the time when the Queen and her Priestesses' Hyouketsu Kyoukai was breached and Tenketsu Palace <Sophia> was suffering a large-scaled assault by the Yuugenshu. It was indeed overly difficult to try to capture the commanding body, but we did manage to capture quite a few of the weaker ones."

"Eh? These weak individuals are a killjoy? Please do not make things difficult for me. I am the weakest when it comes to the barrier-types shinryoku spells. And moreover—"

A faint smile appeared on his lips.

"The weaker Yuugenshu are better suited for our current 'experiment'. Most of the strong Yuugenshu are not obedient. As experiment subjects, they get out of normality easily, so they are not suitable in experiments that demand accuracy...... And also, it will be a huge headache should they go out of control."

*Kon* Maha gave the glass of the water tank a knock.

"Well then, do you still remember the aim of our experiment? The reason you are sent here is so that no humans, beasts or natural disasters harm this water tank during the seventy-two hour experimental period. You are to eliminate anything that attempts to get close to it."

Igun-I then pressed his hand on his fedora.

Though it's uncertain if he was preventing his fedora from being blown away, or if he was just unwilling to show his face that was hidden beneath it.

"That's right, in other words— that body of yours is the strongest barrier. The barrier that is protecting this water tank. Regardless of how many people there are, none of them are allowed to bypass this golden barrier."

The words were said firmly.

It was more than just self-belief. Those words represented absolute certainty due to his unwavering trust.

Maha, who was looking at the water tank all these while, suddenly turned around. It seemed like he had something he wanted to say.

"Ahh, of course. You will be the only person in charge of this. I mean, I am just a small fry who has to be out there running about...... It's not like Mr Maha loves to move about, right?"

"Fufu, I'll be here to pick you up later— alright, there are people coming."

He directed his beautiful chin towards his right.

The black-suited Igun-I, as well as Maha in his golden robe. They could faintly see a five-man team dressed in white ceremonial clothing located quite a distance away from the hill which they were standing on. 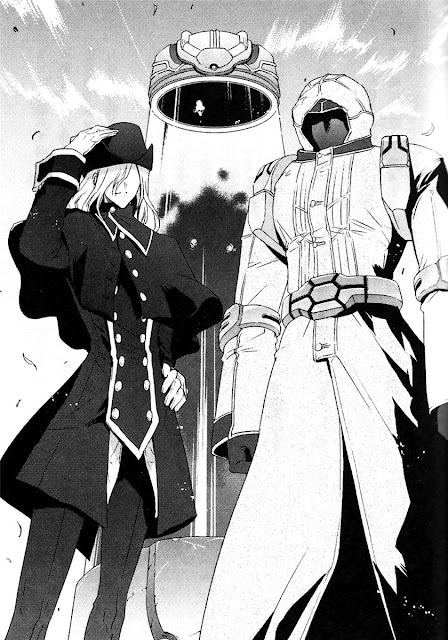 While they needed to squint their eyes to be able to barely see the team clearly, the distance between them was gradually shrinking.

"They are Tenketsu Palace <Sophia>'s...... ahh, those are the guards. They probably received a mission to patrol the nature sector. But what a shame though— seems like Sheltis isn't in that team. I will really love to stay if he is there."

"Ah, sorry. I am just mumbling to myself."

He remained in his frivolous attitude and dismissed the curious Maha with a laugh.

"Alright, let us get back on topic. The clash is happening much earlier than anticipated, but Mr Maha's mission is incredibly straightforward: eliminate all that you encounter - no exceptions."

As he looked at his partner who gave the short reply, Igun-I smiled lightly—

That sentence rang throughout the plains.

And at that very moment, the black-suited man was already no where to be seen.
Posted by zgmfx09a at 8:31 PM