Well, I am finally done with Vol 1 of Sayonara Piano Sonata and Vol 2 of Hyouketsu Kyoukai no Eden. Hope you guys have enjoyed them.

I am beginning the start of my semester, which means I won't have much time to work on the translations as compared to the past few months. Translation speed will drop noticeably, to something like one chapter per week, maybe even slower. As such, I don't think it is a wise idea to work on 2 series at once.

Onii-ai vol 4 is still no where in sight, though it does not really matter to me, because it is just one of the many slapstick harem series out there. Till I've obtained the translations of vol 4, I'll either focus on Sayonara Piano Sonata, or Hyouketsu Kyoukai no Eden, because I don't really think I can do both at the same time, given my current schedule.

There's pretty much pros and cons for working on each of the 2 different series. As such, I'll be setting up a poll on the right. Vote on which series you prefer to be done next. While I will not base my decision entirely on the polls itself, it will definitely influence my decision. Also, feel free to voice out your opinions here.

Did the contents page so that you guys can take a look at what's to come, and make a slightly more informed decision.

And oh, I'll probably stop the polls on 27th January. There's Chinese New Year and all, so I'll be away and stuff. A good 2 weeks break for me.

Next, the reason for changing 'Iris' to 'Ilis' in Hyouketsu Kyoukai no Eden.

Kind of slow, but I just realized Kei Sazane had started a new LN series, titled <Imperfect Divine Arms Ilis>. Illustrations by Kasukabe Akira as well. And you can probably guess who 'Ilis' is referring to. 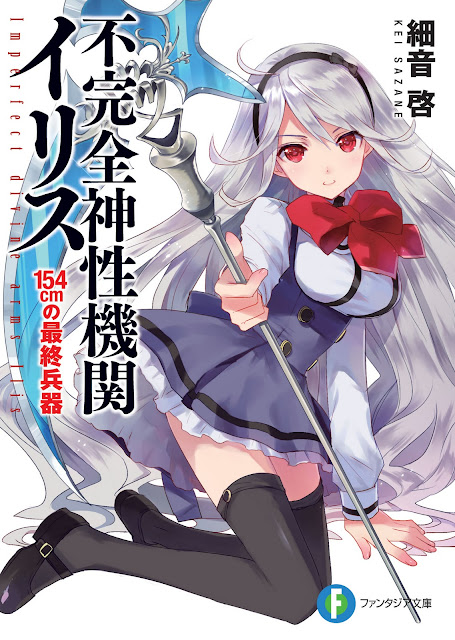 Pretty certain the series is set in the same universe as Hyouketsu Kyoukai no Eden and Tasogare-iro no Uta Tsukai. As for the timeline which it is set in, I am not too sure, but my guess is somewhere before the start of Eden.

As to why I know she's the same Ilis...... She's referred to as Divine Arms in vol 4 of Hyouketsu Kyoukai. Also, she looks pretty much the same in the Hyouketsu Kyoukai illustration, albeit not in color, and she's in her battle armor there.

My waifu in full color, and damn she's adorable. Breasts are slightly too large, since I am part of the DFC faction, but whatever. I can die happy now.
Posted by zgmfx09a at 7:28 PM