>Starts off by introducing herself.
>Will be talking about her past, a story of her hateful sister.
>Says that someone as tall as her will never be moe, even if she puts on a shy face.

>Four years ago.
>159.8cm, D cup, hair same as current style, 12 years old.
>Used to have a complex on how huge and well developed she is.
>She gave up when she hit past the 180cm barrier.
>Remembered Kirino laughing at her in secret when they first met. She said her girlish side was hurt.
>Says she's those type who will bear grudges.

>She used to be bad with people, without many friends.
>Always takes leave due to her weak body and frail soul.
>One day, Kaori came to her room all of the sudden, and asked Saori to play with her, 4am in the morning.
>Saori had not seen Kaori for months.
>Kaori had entered in through the balcony. Saori's room is at the third story.
>Saori described Kaori as 'Kuroneko's body with Kirino's soul'.
>To Saori, Kaori is full of herself and unreasonable. She is someone with the capability that 'allows her to enjoy all sorts of activities'. Kaori had done many sports. Using the family's wealth, Kaori had traveled all over the place to enjoy herself, and as such, Saori had rarely seen her.
>After Saori had changed out of her pajamas into a dress, Kaori put Saori onto her shoulders, and slipped down from the balcony via a rope. Saori let out a huge scream.
>They went to a place faraway via a bike.
>Seemed like Kaori disliked Saori putting on a sad expression recently.

>Went to a white apartment that their dad gave to Kaori.
>Kaori had done sports aggressively so that she can prime her body for the indoor hobbies later.
>Kaori said she will play with Saori from then on.
>Saori got a little angry upon hearing that., but she was still happy.
>Kaori pulled out a fake AK47 from the bike.
>Kaori pointed it to a male friend of hers, which scared him.
>Kaori calls the guy the 'Prince of Darkness'. If Saori is to describe the guy with someone who she is familiar with currently, the 'Prince of Darkness' is too similar to 'him'.
>Saori went all flustered when Kaori introduces her to the guy due to her shy personality.
>Saori felt like dying when her face was seen by a guy.
>Guy's name is Sanada Shinya.
>Kaori introduced Saori to the 'Pretty Garden', the name of their club, where friends of otaku hobbies gather.
>That marks the first day where Saori was introduced to the otaku culture.
>Saw a strange otaku with a handkerchief on his/her head, wearing a pair of swirly glasses, with a red checkered shirt tucked into the trousers.
>The otaku sounds weird (speaking in Saori Bajeena's way of speaking btw), but it sounded gentle to Saori.
>The otaku puts on various personalities and modes when she is drawing manga, but Saori had decided to call her Kurusu (original name) in the end. Kurusu aspires to be a mangaka.
>Kurusu's drawing style will change depending on the mode she is in, just like a chameleon.
>Saori, being extremely good at deducing human relationships, realize that Sanada and Kurusu are lovers, childhood friends, and classmates.
>Saori disliked her ability.

>Saori felt uncomfortable being with them due to her shyness.
>She peeked through her fingers to see them enjoying their time, just like what she does back at school.
>The person who treats Saori kindly was Kurusu.
>Saori felt that she was left on her own after Kaori got her into the 'Pretty Garden', which consist of roughly ten members.

>The group was talking about something when Saori suddenly interrupted them, which was the first time it had happened.
>Kurusu asked her gently to speak out.
>Saori offered to make tea for the group.
>To Saori, Kurusu was a teacher to her in many ways.
>Kurusu showed her potential debut work, which has the main character that looks like Sanada.
>The group teases Sanada, and Saori was envious of them.
>Soon, Saori had gotten into almost all otaku hobbies due to Kurusu.
>Saori had a lot of fun times with Kurusu, and it was all thanks to Kaori.

>One day, Kaori left for overseas after getting married.
>Kaori never went back to the apartment.
>Slowly, the rest of the members left as well.
>Saori went overseas to find Kaori.
>In anger, she said that due to Kaori leaving, the club had disintegrated.
>Kaori retorted, "That can't be helped, since that is the club which I build. You are not doing anything special there anyway. To the members of the club, your existence is just 'a younger sister of a friend'."
>Saori was speechless due to how accurate her sister's words are.

>Back at the apartment, she yelled that she will strike back.
>Kurusu commended on her will. Since she is stepping on the path of a professional mangaka, she will not be coming back either. She was just there to return the keys.
>After giving Saori words of encouragement, she passed Saori the swirly glasses. Saying that it is a pair of magical glasses that can change one's destiny, she cautioned Saori to use it wisely.

>September, after the drama of Kuroneko moving away, Saori at a cafe there reprimanding them.
>Seemed like she knew nothing of Kyousuke going out with Kuroneko, and the whole drama that happened later, until it was all over.
>She knew they were worried that she will be overly worried, but she was still angry.
>Kyousuke, Kirino and Kuroneko apologized.
>Despite admitting in the monologue that she is mentally fragile, she still wished that the three of them can depend on her more.
>She then admitted to them that they are right in their judgement, and she would probably collapse if she came to know about it.
>She continued to go mad for a while, then asked why wasn't she in the picture of the ideal world which Kuroneko had drawn.
>She gave a pitiful smile, and said if she was someone who is not needed.
>Turns out that in order to avoid drawing her otaku looks, Kuroneko had drawn her as the black cat at the bottom of the table. She was spiritually there all along.
>Saori was unhappy with that. Kuroneko laughed and drew a @w@ face on the cat.
>Saori grabbed Kuroneko by her shoulders and started shaking her.
>Kyousuke and Kirino laughed at the scene. They are finding it funny for Saori to show a rare angry side of herself.
>Just then, she heard Kaori's voice.
>The other three are shocked to see Kaori for the first time.
>Kaori had brought along the rest of the 'Pretty Garden' members over as well. Seemed like it was a coincidence that they met.
>Saori asked why the members were all there, and Kaori replied that they had come after she ordered them to, since she was the leader of the club.
>Saori retaliated by saying that she was meeting her group of online friends as well, but she had no intention of introducing them to Kaori.
>However, it seemed like the three knew some of the members from 'Pretty Garden', due to them frequenting Akihabara.
>Kurusu no longer looked like how she dressed in the past, except for the fact that her clothes were still red.
>Kurusu asked Saori if she had accomplished what she had aimed for back then.
>Saori said she is still quite far from Kaori, but with her important companions, she can achieve them someday.
>Her proof, was that their group had got back together time and time again despite facing many crisis. Though she did not tell Kurusu that.
>Kurusu asked if Saori was no longer wearing the glasses. Saori said it was an coincidence that she was not wearing them there.
>Kurusu told Saori to hand it to someone else when she was done with it.
>Saori then left the place, and joined the trio, with the glasses back on her face. 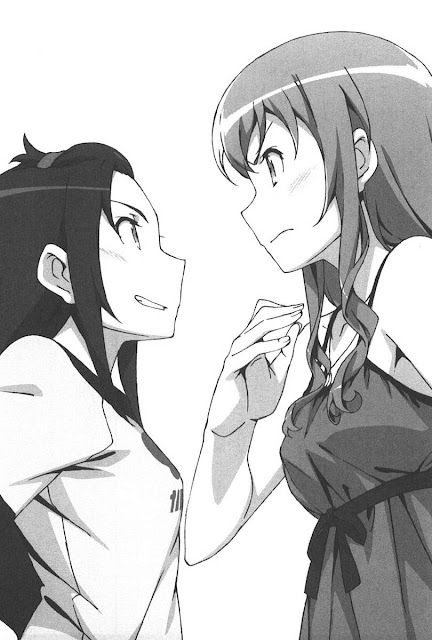 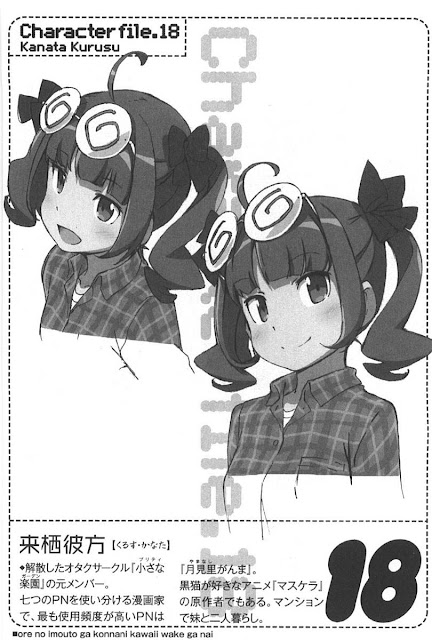 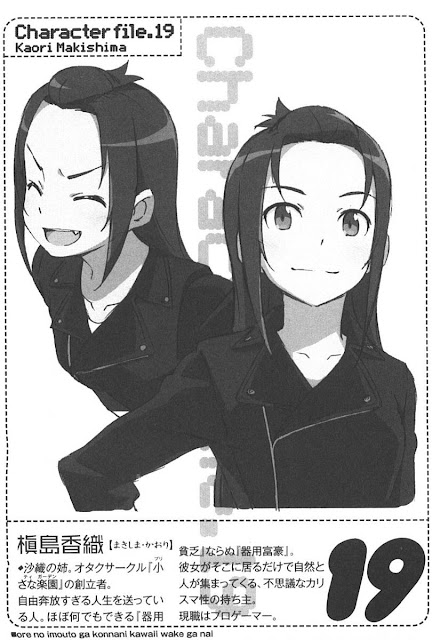 ********************
A surprisingly boring chapter for me, despite it being something that I will normally enjoy. I guess I am just not too huge on Saori, and the fact that Saori is not someone that is in for the race for Kyousuke's affections, making her quite (pardon me) an insignificant character in that aspect.

I wish the author could slot it as one of the promo materials or something, instead of making it to be one of the longest chapter of this volume. I mean, I would very much prefer a Manami-centric pov chapter, which surprisingly (and sadly to all Manami-fags) is no where to be seen at all in this volume.