Chapter 3 - My Sister is so Extremely Cute!
(Point of view: Kouhei)


>Starts by talking about how cute his sister is.
>Says that if it is his friend (Kyousuke), he will probably not be honest, and say things like "I really hate that sister of mine".
>Thinks that Sena is the one and only cute sister in the world. The same goes for his relationship with her.
>He then introduces himself as the world's happiest elder brother of Akagi Sena, and declares her to be his angel.
>Goes about in detail to talk about Sena's good points.
>He feels troubled lately: it felt like Sena was looking at him with a hot glance.
>Just then, he noticed his sister looking at him through the windows from above, while he was exercising, He waved back.
>When he returned back inside the house, his sister was still reading a novel, like a literature girl.
>Sena commented that Kouhei is muscular, and wanted to touch him. Kouhei agreed.
>Sena asked if the other members in the football club are as muscular as him.
>Kouhei said there are some differences, and asked if Sena is interested in football club.
>Sena said she's not good at sports. Kouhei commented that she is aiming to be a game developer.
>Sena asked why does he know that. Kouhei said he had accidentally opened the package delivered to Sena before.
>Sena went mad, but forgave him quickly.
>Kouhei could not understand why, but the reason 'my sister does not like it' is good enough for him to not want to repeat his mistake.
>Kouhei asked Sena about game research club, which Sena had mistakenly heard as gay research club.
>Sena started talking about gay and BL stuff, but Kouhei could catch nothing of what she says. 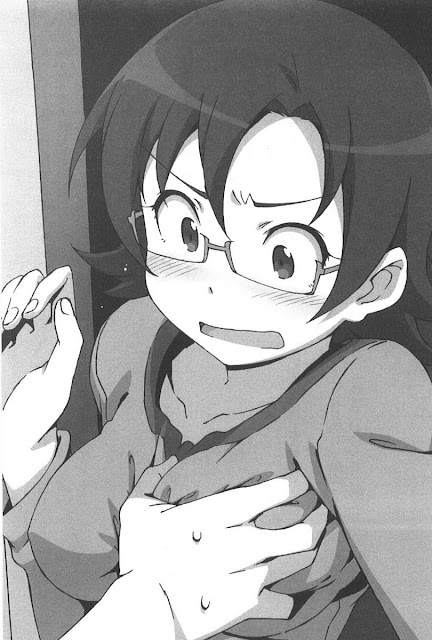 >September, while going back from school.
>Kouhei said confidently to Kyousuke about how cute Sena is.
>Kyousuke had been bullied by the girls from their class for two-timing, and Manami was giving him the cold shoulders as well. As such, he sought comfort from Kouhei by walking back home with him.
>Kouhei deduced that Kyousuke wanted to listen to the stories of his cute sister, in order to pick himself up.
>They started talking about the opposite party being a greater pervert and idiot.
>Kouhei hit back by saying there must be something wrong with Kyousuke, for dumping his girlfriend because his sister hates it.
>Kouhei asked Kyousuke to work hard to improve his relationship with Kirino, since they are getting along better.
>Kouhei then said he will say more stuff about Sena to cheer Kyousuke up.
>Kyousuke asked if he wanted to continue on, and Kouhei said, "Of course, since my younger sister is the cutest in this world."
>Kyousuke got pissed, and corrected Kouhei by saying that his (Kyousuke's) sister is cuter than Kouhei's sister.
>The two of them decided to settle things with a fight......

>The next day, Kyousuke and Kouhei went for the showdown...... in a parodied Yu-Gi-Oh style, but with the pictures and photos of their younger sisters instead of cards. Their goal is to make the opposite side admit that their own sisters are inferior in terms of cuteness. Place: classroom.
>Kouhei started off with Sena's Shichi-Go-San pictures.
>Kyousuke countered with pictures of Kirino on fashion magazines, which proved to be a hard blow for Kouhei.
>Kouhei struck with a picture of Sena without glasses, followed by activating his trap card, which is a picture of Sena in bikini.
>Kyousuke let out a yell, then slipped the photo into his pocket. Kouhei stopped him.
>Kyousuke commended on Kouhei for taking Sena's bikini picture in secret. Kouhei said it is about time Kyousuke surrender.
>Kyousuke laughed it off, and retaliated with a magazine cover of Kirino and Ayase in bikini.
>Kouhei said that the black haired girl is really cute.
>Kyousuke commended on Kouhei's good taste, and said that aside from Kirino, Ayase is the cutest beauty in the world. He then said he wanted to marry Ayase, and Kouhei agreed.
>Kouhei asked if Kyousuke can share the magazine, and Kyousuke said that was his treasure, so no. However, Kouhei can order one from Amazon.
>The both of them temporarily forgot about the duel.
>Kouhei said that Kyousuke's cheating, since his pictures are from magazines, as compared to Sena's photos. Kyousuke will have to show him a picture of Kirino 'putting on a smile for her elder brother'.
>Kouhei proceeded to skip Kyousuke's turns with various pictures.
>Manami reminded them that their lesson is about to start somewhere else.
>Kyousuke asked Manami which of them is the winner. Manami said they are both equally disgusting.
>Kouhei asked Kyousuke to reconcile with Manami as quickly as possible.

>After school, the duel resumes at Kouhei's house.
>Kouhei replenishes his 'cards' with many more pictures of Sena, and was confident of winning Kyousuke.
>He asked Kyousuke why didn't he returned back home to replenish his stock, to which Kyousuke replied he had no idea where Kirino hid her pictures.
>Kyousuke solved the issue by sending Kirino the following message: "I am competing with a friend on whose sister is the cutest in the world. Mail me some of your cute pictures right now."
>About a minute later, Kirino replied with: "You are really disgusting, go die", but there was an attached picture as well.
>Kouhei urged Kyousuke to enter their house so that the duel can continue, but Kyousuke said it was pointless, since he will win.
>The picture was a photo of Kirino in uniform, showing a bright smile and putting on a V sign with her hand.
>Kouhei was impressed, but said he has more pictures. However, Kyousuke stopped him by saying none of Kouhei's pictures will impress him.
>Kyousuke said that he was not belittling Sena. Rather, there was a glaring weakness to Kouhei's pictures: none of them had both Kouhei and Sena in it. Without the pictures of both siblings together, it will fail to show that their sisters are the cutest in the world.
>Kouhei was in awe of the absolute truth spoken by Kyousuke. He was suspicious if Kyousuke had copied that line somewhere off an imouto eroge.
>Kouhei said that Kyousuke is in the same situation as he is, but it turned out that all of that was an elaborate trap set by Kyousuke.
>Kyousuke showed his ace, by flipping his handphone over and revealing the love love purikura sticker of himself and Kirino.
>Kouhei called Kyousuke a bastard, and was deeply envious. He had nothing to counter, and fell to the floor in an orz position.
>Just when Kyousuke was about to leave after declaring his own victory, Sena stepped in.
>Turns out she had seen everything, since when they are in their classroom. She was too embarrassed to step in.
>Sena asked it Kouhei had lost due to him not having a picture with Sena together.
>Sena made Kyousuke hold onto a camera, and then she kissed Kouhei on the cheeks, making victory his.
>With her face in deep red, she then pulled Kouhei into their house.
>Kouhei still thinks his sister is the cutest of them all.

>Back at Kyousuke's house, Kirino asked if Kyousuke had won.
>Kyousuke apologized. Kirino wanted to know how he managed to lose, even after she had sent him the picture.
>Kyousuke showed her the photo of Sena kissing Kouhei.
>Kyousuke stared at Kirino, and Kirino said, "Wait, stop staring at me! I-I will not do that sort of thing to you!"

Watching the two of them duke things out with the photo was just hilarious. The two of them looked so pathetic in the scene that came to my mind. It was a sad, sad scene of two sis-cons fight against each other to determine which of them is the more perverted brother.

Well, there's sort of a round two later, this time with Kirino vs Sena. Will Kirino be able to take revenge for Kyousuke's defeat? Stay tuned.