>Starts off by describing herself as a beautiful younger sister who is good at sports and studies.
>At the changing room of the onsen, lying down with her arms and legs spread wide.
>Dizzy from the onsen.
>Nearly fainted again when she thought back about the 'imouto paradise'.
>Kuroneko came and offered her iced green tea. Both her sisters had ran away from Kirino.
>Kuroneko hoped that Kirino can talked to them sometimes.
>Kirino went wild and asked if she can sleep together with Hinata.
>The Kosaka siblings are living in a different room from the Gokou family, but she felt they should shuffle the people in the rooms, since, "I may be attacked by that sis-con Kyousuke?"
>Kuroneko's father had decided on the room allocation, which is... Room 1: Kirino, Kuroneko, Tamaki. Room 2: Kyousuke, Kuroneko's father and mother, Hinata.

>Late at night, Kirino wondered out loud countless times if Kyousuke is alright.
>Kuroneko asked Kirino not to worry, since she had given her father the 'Genesis-chapter' and 'Phoenix-chapter' of her 'Chronicles of Destiny'.
>Kirino felt that those will do nothing, and was worried if Kyousuke was being beaten up by Kuroneko's dad.
>Kirino ranted on how heartless Kuroneko was, to leave them suddenly.
>Kirino thought about how someone has always been by her side, and yet she did not notice that. Thus, she could not let Kuroneko make the same mistake as her.
>Just then, Hinata came bursting into their room, saying, 'Kosaka-kun is really cool!"
>Hinata was in her pajamas, and was in an excited state.
>She had originally thought that Kyousuke was so useless he should die, but it turned out that he is way cooler than she had expected. She was falling for him.
>Kirino wanted to know about the conversation between Kyousuke and Kuroneko's dad, but having guessed their conversations already, Kuroneko stopped Hinata from saying it.
>Hinata revealed that the talks were peaceful, so Kirino do not have to worry. Kirino was more curious as a result.
>Kuroneko's dad had even invited Kyousuke to the onsen to take a bath together.
>Hinata said that since Kuroneko had broken up with Kyousuke, she wants to marry to Kyousuke. If so, she can be real sisters with Kirino.
>"Stop talking rubbish, young girl! Do you want to be hungry for the rest of your life!?"
>"Haaaaa!? Even if you don't do that, Hina-chan is already my wife! Idiot!"
>Hinata shivered in fear, and ran away after apologizing.
>Kirino said to Kuroneko, that after the incident, she had realized Kuroneko is still not qualified to have a boyfriend.
>Kuroneko said she had intended to prove Kirino otherwise.
>Both of them stared at each other in their blankets. 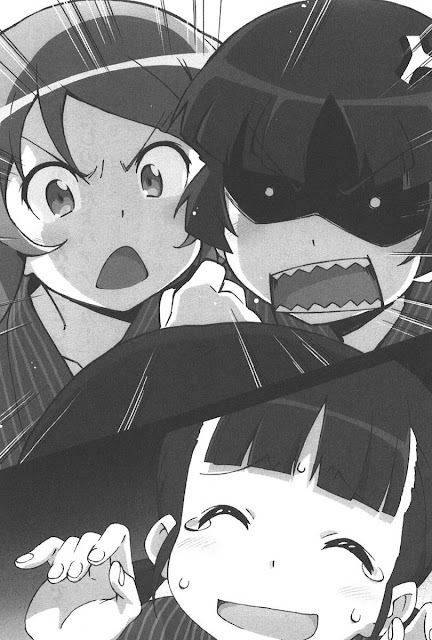 ********************
And here we go. Kuroneko's dad has already accepted Kyousuke to be their future son-in-law. And yeah, those two sentences are actually in bold, with a huge font size. For that impact.

This chapter is kinda short, but then again, there's three chapters coming from Kirino's pov, so I guess that is fair.

Next chapter is probably one of the funniest chapter out of the whole book.