>Begins with Kyousuke talking about how the September break has ended.
>Half a year is left before he graduates.
>He had asked Kirino about her plans for the future, but she was keeping it a secret.
>He then talks about how the rest of the character has their own story to tell.

Chapter 1 - My Sister is a Denpa Girl and a Holy Goddess
(Point of view: Hinata)


>Starts of with Tamaki's essay about her sisters, how she loves them the most.
>Tamaki don't know how to lie, so it is all true, and Hinata is very embarrassed.
>Hinata thought of showing it to Ruri so that she will writhe in embarrassment. Licked her lips in anticipation.
>Describes Ruri as a pretty girl with snow white skin and black hair.
>Says that despite how Ruri looks, Ruri is actually mischievous, and someone whom you will feel like bullying. But sadly, Hinata has not found anyone who she can share that hobby with.
>Ruri has been engrossed in games, manga, anime and novels since young.
>Ruri had started writing her own novels and manga a few years back, and even wears a goth loli dress and performs rituals in her own room at night, after some influence from some anime.
>Says that Ruri's 'rituals' are gradually increasing in levels, and it is common for her to call an imaginary someone via the phone.
>Tamaki wrote about Ruri's otaku hobbies, and Hinata worries about her future.
>From Tamaki's essay, it seemed like Ruri has a boyfriend.
>Seems like Ruri has occasionally confined in Tamaki, seeing how Tamaki will not understand anything she had said.
>Hinata tried confirming by asking Ruri while she is making dinner.
>Ruri froze, and turned around mechanically.
>Ruri's face went red, and Hinata found it really cute.
>Ruri described the person whom she likes as someone who is "a very...... impressive person", but they are not dating yet.
>Hinata asked if Ruri has confessed, and Ruri became slightly angry.
>Hinata tried provoking Ruri, and it worked.
>"Even if it is me, there is a guy whom I have...... formed a <<contract>> with."
>"His current name is <<Kyousuke>>. He was the wild beast which had accompanied me back when I was a <<black beast>>......"
>Hinata thought Ruri's boyfriend is a fake, and she pitied Ruri.
>She then asked what are the outstanding qualities of Ruri's crush, and Ruri replied with "...... E-Everything".
>"He is a suave, gentle...... and really dependable person."
>Ruri said that there are a lot of girls who loved Kyousuke, and someone will be hurt if she confessed.
>Hinata recalls the pitiful days where Ruri showed off her online 'friends', then thought about how happy Ruri was after she had made a real friend in the form of Kirino (though she had not seen Kirino before).

>One day, Hinata saw Ruri going into the room with a suspicious book, and thought it was an ero book.
>Turns out to be a fashion magazine, which was shocking.
>Hinata asked why Ruri was looking at the magazine, at which she replied, "...... My friend is on the cover."
>Hinata gave the "Ruri-nee has friends!?", at which Ruri wringed Hinata's face.
>Ruri said that the bitchiest person on the cover is her friend, who turned out to be the prettiest as well.
>Ruri kept calling Kirino a bitch, and Hinata thought that was probably her way of praising Kirino.
>Ruri's current screensaver on her phone consist of the image of Ruri, Kirino and Saori. It used to be pictures of Hinata and Tamaki.
>Hinata felt a sense of relief that she is spared of further embarrassment due to the screensaver, but at the same time, she is slightly jealous of Kirino and Saori taking over her place.
>Hinata said she wished to see Kirino, but Ruri said she will never allow her sisters to see that beast.

>A certain day in halfway through the holidays, Ruri returned home with a silly grin, and was laughing to herself. She staggered while walking.
>Hinata asked about what they are having for dinner, but Ruri was still dressed in her goth loli dress. She was hugging the cushion with her face looking downwards, and was kicking her legs about.
>Ruri then started to roll about.
>Hinata was shocked speechless. Ruri did not even notice Hinata's existence.
>Ruri staggered to the bookshelf, then began to write something on the notebook with a blissful expression. She had even written the name 'Kosaka Ruri', only to strike it off. 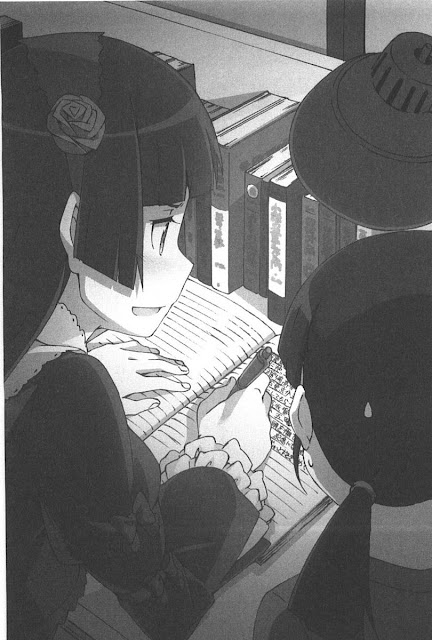 >From that day onward, Ruri was acting strange.
>Ruri chased them out of her room when she was getting an important phone-call.
>Hinata listened on in secret, and it was all lovey-dovey: "That...... there's nothing particular....... did I trouble you? That...... I just want...... to hear your voice, so..."
>Hinata felt so sad, she nearly cried.
>At the very night, Ruri let out a sinister laugh.
>Her white lolita dress was complete (along with her 'class change').
>Hinata barely contained her laughter.
>Ruri said it was a dress of the holy angel, with the magical powers that can charm all men.
>Ruri then asked Hinata and Tamaki what are their favorites out of all the dishes she makes.
>Hinata asked who Ruri is seeing with the bento of hers, and Ruri replied that she was going on a date.
>Hinata asked if the person is Kirino, but Ruri denied immediately. Hinata thought it could not possibly be that 'Kosaka Kyousuke', since he an imaginary boyfriend.

>Next day, Hinata was shocked at the sight of Ruri, who was wearing a long white dress, with a huge pair of wings and a weird mask.
>Again, Hinata tried desperately to hold back her laughter.
>Hinata made Ruri to do something about the huge wings, and Ruri changed to a smaller pair.
>Hinata thought to herself, that any guy who does not dump Ruri upon seeing her in that attire, can be considered to be a god.

>Hinata had felt it was suspicious for Ruri to make them stay out all day, plus the fact that she had cleaned up the whole house. As such, she returned earlier than as instructed.
>She was surprised that Ruri's boyfriend was real. And he was not as handsome as she had expected.
>She liked Kyousuke's tsukomi.
>Kyousuke looked happy when he heard from Hinata how much Ruri had praised him, and Hinata found him to be slightly disgusting.
>Ruri came back, and Hinata said they are talking about how much Ruri loved Kyousuke.
>Ruri's whole body stiffened and trembled like a tuning fork, much to Hinata's delight.
>Hinata began reciting the embarrassing words Ruri had said.
>Hinata ran to Kyousuke's back to hide from Ruri. In her monologue, she addresses Kyousuke as 'future brother-in-law (?)' said that Kyousuke is basically clumsy at times like this.
>Hinata whispered into Kyousuke's ears that she can give him a kiss if he helps her, which he declined immediately.
>Ruri said that Kyousuke's soul was about to be hers, and childish seductions will no longer work on Kyousuke. Hinata retorted softly that their cups are of the same size (B). Ruri beat Hinata up.
>Kyousuke recalled that Ruri's chest was very big back when she was in her 'kami-neko' mode, at which Ruri froze.
>Both of them were attacked by Ruri.

>Kyousuke going over to Ruri's place became the norm.
>Hinata finds him to be gentle and kind. He is a nice person to talk to, and a straightforward person. A person who gives of a calming aura.
>She finds it impressive for the shy Tamaki and Ruri to be able to talk to him normally, and how fast he blended into their family.
>He someone who has a characteristics of an 'elder brother', despite not having good looks.
>It feels lonely when he was not around.
>Hinata felt that Kyousuke will probably attract various types of girls. If he was her elder brother, she would not let him go as well.
>She thanked all of Ruri's friends for taking care of Ruri.

>She knew about Ruri breaking up with Kyousuke on the night of the fireworks.
>Kyousuke praised Ruri's kimono, and Ruri was happy and embarrassed about it.
>Hinata had wished them all the best when they went for the fireworks.
>She thought that the two of them were deeply in love with each other, an inseparable pair of lovers.
>However, Ruri had returned with a crestfallen look.
>Hinata peeked into Ruri's room, and saw Ruri crying in darkness, with her kimono on.

>After that, Ruri remained moody.
>Their father brought them to an onsen trip in an attempt to cheer Ruri up.
>Ruri walked out in her sports attire.
>Hinata could not comprehend why Ruri and Kyousuke would break up, since Kyousuke is not the sort of person who will hate Ruri in one night.
>Hinata wished that Kyousuke would do something about it, and when she lifted her head up, she saw Kyousuke, with Ruri behind him.
>Hinata was surprised at why Kyousuke was at that place. Kyousuke replied that he was there to find Ruri.
>Hinata found him really cool.
>Ruri face was probably flushed red as well.
>Kyousuke said that everything has been settled.
>Hinata thought that Kyousuke was indeed not a useless person, for him to have solved her troubles in an instant.
>She noticed the girl next to Kyousuke, and recognized her to be Kirino.
>Address Kirino by 'Bitch-san'.
>Kirino forced Ruri to give her a proper introduction.
>Kirino began to enter her sis-con mode, and tried making Hinata call her 'Kirino-onii-chan.
>Hinata was bewildered, and Kirino settled with 'Kirino-onee-chan'.
>Hinata thought it was disgusting, but was probably her own imagination.
>Hinata thanked Kirino for being Ruri's friend.
>Both Kirino and Ruri said some embarrassing stuff about their friendship.
>Kirino said they will be staying at the hotel as well. Hinata suggested that they go for a bath together.
>Kirino's sis-con mode deepened when she heard Ruri has another younger sister.
>Hinata could not understand why Kyousuke and Ruri were sweating cold sweat.

>In the onsen, Kirino went 'beast-mode', which scared Tamaki.

********************
Pretty okay chapter to start the volume with. Talks a bit about Kuroneko's past from Hinata's pov, but the main enjoyment actually came from Hinata's inner thoughts at Kuroneko. Her worrying for Kuroneko and teasing Kuroneko is quite probably the best part of the chapter, but I am lazy to do all of those in detail.

Nothing much to talk about otherwise. There's nothing really new here, except maybe a few cute scenes of Kuroneko, and her heartbroken state when she broke up with Kyousuke.

And oh, no proofreads and stuff, so pardon the poor grammar.