>Introduces herself as the extremely cute younger sister of an extremely sis-con elder brother.
>Kirino was at Ikebukuru with Sena, which according to Sena, is the paradise for girls.
>Kirino was slightly envious of Sena's boobs.
>Kirino was not too interested in BL stuff, and she had only played a light BL eroge before, due to the misleading title, <<Kichiku Aniki (鬼畜兄貴)>>.
>Sena called Kirino her best friend upon hearing that at school, and thus brought Kirino to Ikebukuru.
>Sena and Kirino started talking about BL stuff in anime and manga. Sena soon entered her machine-gun mode.
>They bought some entry level BL materials for Kirino to work on.
>Kirino asked if Sena buys her own BL materials.
>Sena said she made her brother buy most of her stuff.
>Kirino felt a little weird, but Sena said it is similar as to how Kirino gets Kyousuke to buy eroges for her.
>Kirino asked if Sena's brother is gay, and Sena replied with a proud yes, without hesitation.
>Kirino mentioned that Kouhei shares a good relationship with Kyousuke.
>Sena said the two of them are probably dating. Kirino slammed the table in shock.
>Sena sounded absolutely certain, resulting in Kirino doubting Kyousuke a little.
>Sena said that Kyousuke is a uke type. Kirino could not understand the things that Sena said following that, about how Kyousuke is someone who needs to wear nekomimi and so on.
>Kirino felt that it is necessary to ask Kyousuke if he is really dating with Kouhei, just to be sure.
>Kirino suggested that they talked about something else, but Sena gave a look of 'what else can you talk about in Ikebukuru?'.
>Kirino asked if Sena had someone she liked. Sena responded with an even bigger reaction then when Kirino first talked about <<Kichiku Aniki>>.
>Sena began to talk about how her relationship with Kouhei quite bad recently, after the kissing incident.
>Kirino spitted her drink upon hearing that. Sena stressed that it was just on the cheeks.
>Kirino remembered the photograph Kyousuke showed her, and how envious Kyousuke looked back then.
>Kirino felt it was disgusting, but Sena said that Kirino had done things like taking a love-love purikura photo.
>Kirino said it was black history and Sena should forget all about it, at which Sena questioned Kirino why she still had the sticker stuck on her handphone.
>"Th-This is so that I can remind myself that he is a disgusting sis-con. But for Sena-chii, since you are the one who kisses (your brother) on your own accord, Sena-chii's the disgusing one. OK?"
>Sena said Kirino is not qualified to call her disgusting. And also, Kyousuke is nothing compared to Kouhei if they are talking about their sister-complex.
>Kirino said that Kyousuke has a much deeper sister-complex than Kouhei does. 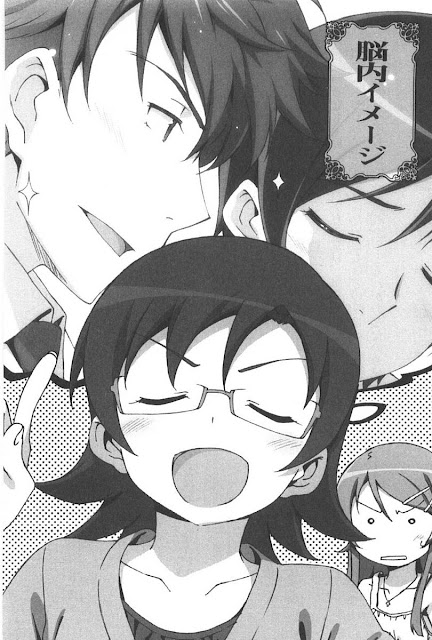 >And that marked the start of the competition: whose elder brother has a bigger sister-complex.
>Sena said that Kouhei loves her so much, he is willing to buy BL games for her by joining the queues in the middle of the night.
>Kirino said Kyousuke did the same for her eroges, but not only that, due to him missing the last train and not wanting Kirino to wait till the morning, he had cycled from Akihabara to back to Chiha on a borrowed bicycle.
>Sena said that Kouhei is preparing to buy a sex-doll that looked like herself, from an adult store in Akihabara.
>Kirino was made speechless. Sena puffed her chest in pride, and said that Kouhei has a bigger sister-complex.
>Kirino shouted that it has nothing to do with sis-con, since it was plain perverseness.
>Sena said that Kyousuke's brother is a pervert too, and he had always wanted to touch Sena's breasts each time they met.
>Kirino called it a lie, but Sena said it's the truth, and Kyousuke had said things like, "I'll grope your breasts, you sow".
>Kirino thought to herself that she will kill Kyousuke if that is true.
>Sena thought she had the upper hand, and ended with a killing blow by saying that Kyousuke has fallen for many girls, but Kouhei is loyal only to Sena.
>Kirino said that according to her information, Kouhei had said before that he wants to marry Ayase. Sena was shocked, and asked who Ayase is. Kirino let out a snicker that Kouhei is not as loyal as Sena thought.
>Kirino followed up by saying that Kyousuke had broke up with his girlfriend (Kuroneko) because she disliked it.
>Sena could not believe it, but Kirino continued by saying that she was attacked by Kyousuke late at night just not long ago.
>She finished off by saying that back when she was at America, Kyousuke had specially flown to her side, and said, "If you are not around me, I will die" while crying.
>Sena was silent for a few seconds, then she shouted to Kirino that she will go home to tell Kouhei about it.
>Kirino was worried that Sena will do stuff that are even more daring, and began to imagine H-scenes at Akagi house.

>Few days later, they were chatting over Skype.
>The first thing that Sena said was to ask if Kirino had a pixiv account.
>It seemed like Sena had talked to a pixiv artist about quite a lot of things, and the artist had helped her quite a lot as well. She provided Kirino with a link.
>It was a BL drawing.
>Kirino could recognize that the uke is Kyousuke.
>Sena asked if Kirino could really not recognize who the other person is.
>Kirino said she couldn't recognize who the other handsome guy is, and she thought Sena had always paired Kouhei with Kyousuke together.
>Sena said she had thought of an even better combination than AkaKyou.
>Sena replied that he is "Kirino-kun".
>Kirino-kun is an otaku younger brother, who has good looks, and excels in his studies and in sports. However, due to his younger-brother-complex, he was engrossed in BL games.
>With the life counseling as an excuse, Kirno-kun did H stuff to his elder brother.
>"What do you mean by 'did'! W-Why did things turn out to be like this!"
>Sena said it was a stroke of inspiration she got when she was talking about her own romance stories a few days back.
>Kirino asked the Sena to remove it immediately.
>Sena said it was impossible, since the drawing was done by a talented artist. The picture should have spread throughout the net by now.
>Kirino closed skype in a fury, and was breathing heavily due to her anger. She thought to herself that she should forget everything about it.
>She then took a loooooong hard look at the picture, titled "The Scene of Kirino-kun Assaulting Kyousuke".

********************
The manner at which the chapter end sure took me by surprise. The fujoshis can be pretty scary when it comes to things like these. The 'duel' was no where as entertaining as chapter 3's but yeah. The ending takes the cake.

Kyousuke confirmed to be M / uke for life.