Ordinary height and weight. Average looks. Grades are neither good nor bad.

Current living together with my bro-con sister, who is aptly described with the adjective 'extreme' - aside from that, I have nothing that will attract the attention of others. I am your typical uninteresting guy.

That was everything about me, Himenokouji Akito. Up till yesterday.

"Which means it is because of that? We had harshly ridiculed your sister about her brother-complex yesterday, isn't that so?"

While on route to St. Ririana Academy.

After picking my call, my friend, Sawatari Ginbe Haruomi, chuckled while saying that.

"That is because me, Kaichou and Fuku-kaichou ostracized Akiko with the reason that she is your blood-related sister. For her, she will want to reestablish her self-identity. Or rather, she needs to have some sort of theory to once again establish her own legitimacy."

I nodded my head while pressing my cellphone against my ear.

"Brother-complex is indeed inconvenient, but it is not a curse!"

My sister's sudden outburst of that line, which sounded like a certain slogan of a rather popular book - so that's the reason behind it.

Which means to say.

On the day of the opening ceremony, due to the reason of her being blood-related to me, my sister had endured condemnation from them, though it was rather close to persecution.

As someone who openly calls herself as a bro-con and has the resolute intention of viewing me as a member of the opposite sex, she would have to come up with some sort of plans to stage a comeback by her own means.

"Well, whatever. But, do not go overboard with the teasing, Ginbe. Even if she is like this, she is still my precious little sister."

"Well well. As someone who was teasing your sister alongside with us, you are in no position to talk."

"Fufu, you don't have to be that secretive about it. I understand very well what you are thinking. You are forcing yourself to put on that sort of attitude. You had kept a certain distance away from your lil sister's brother-complex because you want to clarify your stand to the public, right?"

"It's not like we had only known each other for a day or two. You can't hide such things from me."

"Then again, what's the meaning of this? Please stop saying those nasty things if you already know what's going on."

"Fufu, please don't say that. Making fun of your pain is one of the few hobbies of mine." 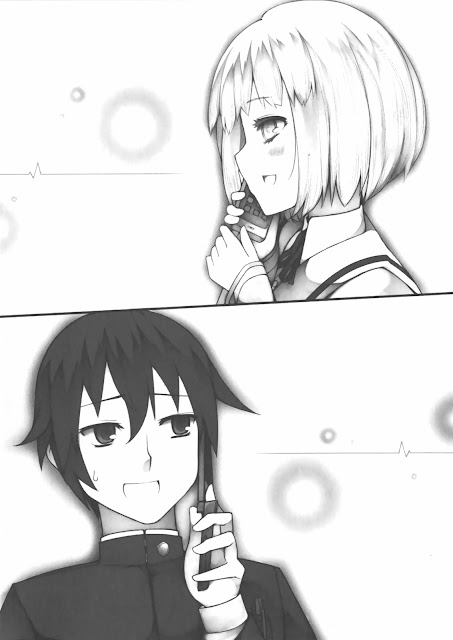 With that said, Ginbe chuckled again.

Well,  you can almost say that it is the only shortcoming of Ginbe, who is a mysterious beauty due to her silver hair and emerald eyes. She is actually a multi-talented person - it would be great if she could have more decent hobbies.

"Fufu, what's wrong, Akito? Even though we are separated through the phones, I can still clearly see the expression of your face right now - it's as if you have just eaten an extremely sour dried plum."

"How very irritating...... Well, whatever, I am prepared to endure through it anyway."

"That hobby of yours is something I can't compliment you for even if I am being  very courteous about it. Well, I'll just turn a blind eye to the details, because that you are not only my friend, but also my benefactor."

"Well of course. Didn't you deliberately moved from Kyoto to Tokyo because you are worried about me? I was rather shocked...... but to be truthful, I am really happy."

The reason she had not informed me about her transfer to St. Ririana - "it is so that I can shock you, and to have my small revenge on you" - that was how Ginbe had put it. I do know very clearly, that it is not the truth.

"Really, Ginbe, you are the perfect friend. I wish to maintain our friendship for life. If possible, if you can continue to be my good friend and to get along with me as always...... There is nothing that will make me happier than that."

I had actually channeled in all my grateful feelings and said such embarrassing things. But somehow, Ginbe became silent on her side.

"What's wrong? Did I say something wrong?"

Ginbe said that while mixing in her sighs.

"Really, how the heck did he reach that sort of conclusion? Actually, I do have an idea. Indeed, my way of speech and my rather poor figure - even if one is to be courteous about it, they can hardly call it as feminine. But even so, you can still......"

"It's nothing. It's just that I had that small urge to rage at how dense you are."

"Oi oi what's with that, that's not nice. Also, I don't think I am a dense person, yeah? Or should I say - I am not tooting my own horn here - but I am a rather sharp person despite my looks."

"Ohhh? Then can I test you by asking you a question?"

"Yesterday, your sister was ostracized by us - me, Kaichou and Fuku-kaichou. The reason was that lil sister is your blood-related younger sister. Do you know the reason why?"

"Eh? Do you even need to ask? Because it is fun to see how she reacts when she is being teased? Things like her being my blood-related sister is just an excuse, right?"

From the tone of her voice that came through the phone, it sounded like she was somehow very shocked - or rather, it was near the point of despising me.

"Don't be that flustered. I had no expectation of you getting it right."

"Oi oi what's with that. If there is another reason, then tell me about it."

"Touch your heart and ask yourself why, you blockhead."

After saying such a cold line,

"In any case, I have already decided. I am sorry, but from now on, I'll be proactive in bullying not just you, but also your sister as well."

She actually said that.

"Oi oi hold on a second. Why have you came up with that conclusion? What's the meaning behind that? I don't understand."

"You are worried about your lil sister's weird actions, and called up after you had left your house. This is irrefutable proof of how much you love your lil sister."

"Of course? She's my dear younger sister, you know?"

"So you have to treasure her that much just because she is your lil sister? Don't you think it is inevitable for me to be jealous of her due to that? Or else the balance will not be maintained."

"What's with maintaining balance and all that? I am even more confused now."

"Just to add on, it's not just me. The whole students council will put on the same stance as me - except you siblings, of course."

W-What did that person just say?

Which means to say, those sly students council members will be teaming up to pick on my sister.

If it becomes like that, my sister will think of all sorts of things to retaliate with all her might. But no matter what she does, her opponents are just to powerful for her. The result will definitely be her surrendering miserably and running away with her tails between her legs while she cry her eyes out.

And then- And then-

Or rather, it looks like it will be really fun.

"I had known you for so many years already. I'll know things like these even if I cannot see your expressions through the phone...... Well relax. I am prepared to tease her, but I know my limits. I do rather like your little sister if I ignore the fact that her brother-complex is way beyond the limits. I can't bear to see her crying her eyes out."

That incompetent sister of mine - she will unleash her cuteness the more she is being teased at by others. If Ginbe was to help, it will much way more effective in seeing and appreciating the cute side of that girl.

"Eh? Absolutely not. I am just thinking - it will be great if Ginbe can tease Akiko more, so that I can see more of the cute side of that girl."

I am not deliberately using her lines, but it is not like I had known her just for a few days either. It was just as if I could see her shaking her head in front of me while listening to the phone.

"You are not just an extreme sis-con, but you are a rather horrible sadist as well. So that's what it means to be so hopelessly incurable. Damn, that's slow of me...... I did not even know about your weird sexual preference until now. This is totally the symptoms of a late-stage cancer. There's no cure."

Was I brutally scolded by her or something?

"No no. Hold on a second Gin. Firstly, I am not a sis-con. And the thing about me being a sadist - that's a huge misunderstanding."

"Really, there has to be a limit on how much obstacles there can be. So that's how it is to be pinned from the front and the back, huh...... If that's the case, we will not live to see the day no matter where we strike. Oh well, since I am attracted to such a guy, does that mean that my days are numbered......"

"Eh? Ha? What are you talking about? I can't hear you properly."

"Shut up, you are pissing me off. It's nothing. Akito, just get kicked by a horse and die flying to the moon. And don't you ever come back."

"Ehhhhh? W-Why are you that angry? I don't really understand, but did I spoil your mood? I am sorry, please forgive me."

"Hmmph. Spare me those half-hearted apologies. It's not like you are someone in debt to be smiling and begging for forgiveness. I am get angrier and angrier while thinking about the treacherous plans of a man like you. That's enough. I am hanging up."

I switched off my phone and swallowed hard.

Have I made that person mad again?

The number one person whom I do not want to piss off. Not only have I received plenty of her care, she also knew many of my weaknesses.

Even though she is a rather rational person, who says things like "to be angry at you, and to forgive you - they are two separate matters". Somehow, when talking to me, she had occasionally flared up without rhyme or reason. If she had none of those problems, she will actually be the best friend one can have.

The original objective for the phone call is to inquire the the weird actions of my sister - and that has been achieved already.

As for Ginbe's attitude, I'll just think of it optimistically as her way of expressing her friendship.

That must be it. I could not contact her regularly due to how busy I was from the house-moving. She still took that to heart even until now, so she is currently throwing her tantrum at me. That's right.

It won't do if I don't take some time off to placate her. I'll just bring along her favorite cake and visit her some time soon - that's how I reflected on myself.
Posted by zgmfx09a at 11:57 AM