Akiko can be a philosopher or something. Her deep insight into 2D sis/bro-con had brought me to tears.

"Brother-complex is indeed inconvenient, but it is definitely not a curse!"

It was morning at the dining table in the caretaker's room of the St. Ririana Academy's students' hostel.

My rather incompetent sister suddenly said that with her eyebrows arching up.

"Many have the misconception that having a brother-complex = having a curse. There are even some narrow minded people who firmly believes that brother-complex is some sort of mental illness. People that had committed such serious errors have repeatedly appeared, and that is the sad truth. But, even so, we should never give in. We should firmly maintain our stance, and fight against such prejudice to the end."

Upon hearing my sister's grand speech all of the sudden, I stopped my hands from eating breakfast,

"Well, I don't really understand what you are talking about, but I'll just say this: brother-complex is not something that wonderful, alright? You can't openly be in love."

"Hmph. It's something that I already know...... but Onii-chan is one of those pitiful people who is plagued by the sickness called common sense. That is probably the only weakness of my brother whom I am deeply in love with."

"But if you are a bro-con, your will not be able to have healthy children, right? The fact is, the union of genes between two closely related relatives will result in the hindrance of the development of future generations. That had been already proven by both history and science."

"Yes, that! I was about to talk about that!"

"Stop waving your fist and chopsticks about. That's rude."

"It is this very taboo that makes such passionate love even more exciting!"

My sister ignored my reminders and continued on.

"I dare say this: brother-complex is a gift from god - an irreplaceable talent."

"Indeed, I had occasionally suffered from gratuitous criticisms due of the fact that I am a bro-con. There are occasions when I am treated unfairly by people subconsciously as well, and so I'm unable to take revenge on them. I have to admit, this is something rather inconvenient in regards to my everyday life."

"Rather than talking about all these things, why are you not eating? The food will become cold if you don't eat them quickly, you know?"

"But, you cannot say that it's a curse or anything! Everyone doesn't know what sort of happiness I had been enjoying everyday due to me loving Onii-chan a lot! As someone who treats my blood-related brother as a member of the opposite sex and loving him deeply for that, they had no idea what sort of glorious life I have been living!"

"...... You know, it shouldn't matter even if the opposite party is not me, right? The amount of happiness that you feel will be the same even if the other half is not blood-related to you."

"No, you are totally wrong! It is against morals, but that's the perfect reason why we can savor absolute happiness! Also, would anyone find a romance enchanting if it was smooth sailing? The answer is nope, absolutely no one!"

I had realized this conversation will not end anytime soon.

I ignored my sister's speech, and changed the subject.

"Each and every grain of rice is plump and glossy. It is obviously different from those of the past. Could it be that you had switched to another type of rice?"

"Please Onii-chan. This tactic will no longer work, you know?" 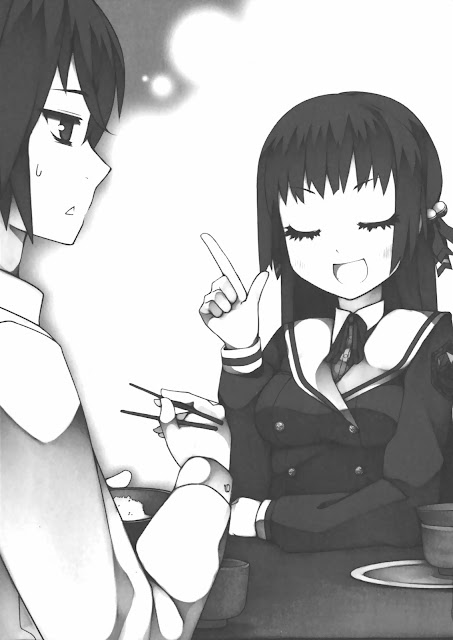 "Akiko had already experienced it personally,. The skill that Onii-chan is proud of, which is to change the subject of the conversation. That's right, if you think that I'll always fall for that, then you are terribly wrong."

"Upon closer inspection, you had mixed various types of rice into this, right?"

My sister showed an expression half in shock and half in glee.

"I had planned to be secretive about it, but who would have thought that it will be found out that quickly....... as expected from Onii-chan."

"This is probably...... some sort of inexpensive rice, right?"

"Ah, you are sharp. Yes, that's how it is. I used a type of really ordinary rice that cost five hundred yen per kilogram."

"Yes. Actually, it is not just the expensive types of rice that are delicious."

"Uhuh. Meaning to say, it is something like blending coffee, right?"

"As expected of Onii-chan. It is just as you have said."

"I see. It's no wonder I find the taste so intriguing. You are really wonderful to be able to make 1+1 equal to 3 and even 4."

"Ehehe. Thanks for your compliments."

"Come to think of it, where did you learn such techniques from? Did the Arisugawa family actually teach you stuff like these as well?"

"No, how can that be? This is taught by the boss of the rice shop whom I have gotten familiar with recently. Since the Arigusawa has their lofty reputations to uphold, they will only use organic rice of the highest quality. Actually, the typical rice can be as delicious as this with just some effort put into it...... those people's minds are really rigid."

"...... Sigh, but I am really sorry to have caused you to undergo such troubles."

"No, it is just that our family budget is really tight. You learned techniques like these because you want to lessen the burden on us, even if it is just a little. Isn't that so? If only I can earn more money, then it will be easier for you as well."

"Onii-chan, what are you saying? I am extremely satisfied with our current lifestyle, and I am really grateful to Onii-chan for living together with me everyday. That is my responsibility as your wife to be as thrifty as possible, so that we can work towards a better life. Onii-chan should focus on his work, while I focus on the housework - isn't this wonderful?"

"Hmm I guess. Although I had spotted a certain term that is quite wrong. Well, so that is how it is huh. I'm feeling a lot better if you put it that way. You are really a capable younger sister, Akiko."

"Ehehe, thank you. Well, Onii-chan, please eat it before it gets cold. There is still more, you know?"

"Mmm. Since it is so delicious, I'll just eat slightly more."

"Alright, please eat to your heart's content. Also, I had spent extra effort on the miso soup as well, did you notice that?"

"Ah, it really is. We had accidentally chatted too much."

"It's alright, Onii-chan, please go to school first. I'll go after clearing the dishes. It's my turn to be washing the dishes today."

"Oh. I am really sorry about that."

"Don't put it to heart. I really want to go to school with Onii-chan together - but it will not do if we do not follow on these rules."

"Mmm yeah. That law-abiding attitude of yours is really dependable."

I stood up from the short table, and checked my looks using the mirror on the ground.

Fact is, even till now, my body was still not used to wearing St. Ririana Academy's rather old-fashioned uniform.

Today is my first day of work as a member of the students council. Even though being given the post of deputy assistant of secretary (errand boy) is not something out of my own will. It won't do if someone like me, who had just transferred into the school, played around with my duties. I'll be an utter embarrassment for my sister, who is the secretary. As her elder brother, I don't wish for anything like that to happen.

Opening the huge door of the wooden seventy-years-old shabby apartment, I was welcomed by the winds of late spring.

Today is a clear day that is almost cloudless. The chance of rain is almost 0%.

As for myself, Himenokouji Akito, who is talking his first step into a new chapter of his life, this is definitely something good,

My sister chased up to me as I was walking out of the hostel. She was breathless.

"Hold on a second Onii-chan! I am not done with my speech!"

"Hmm? I had listened to you talking quite a bit about the methods of mixing rice as well as the secrets of the miso soup."

"Not those things! It's the topic about how being a bro-con brings about inconveniences, but it is definitely not a curse!"

My sister just rushed onto the streets while still wearing her apron, with her eyes becoming that of an inverted triangle,

"Really...... Onii-chan you're too much. You had deliberately ran away from your cute sister, who was trying to tell you something important, by changing the subject. I have said that I'll not fall for it again, right?"

"Mmm, I guess you did say something like that. But you had bitten at my bait almost at full force, you know? Just now."

"Ignore that for the moment!"

She pointed at me with a *swoosh*.

"Please listen to me carefully,because this is something important! You have to remain here and not move an inch till you have listened to everything that I have to say-"

"Well then, lets just leave it at that. I am short of time."

"Wa-!? You are turning your back towards me and leaving in a hurry after saying that!? That's enough, there is no use running. With my godly speed that can run fifty meters in a mere six seconds, it will be easy for me to catch up to Onii-chan-"

"Oh. Right, right. You are to clear up the dishes immediately. No leaving them for later. Your brother dislikes children who does not follow the rules, you know."

"T-That's too much! You had planned to trap me with that all along!? Onii-chan you're an idiot! You're mean!"

I pretended not to hear the protests of my sister. I increased the pace of my steps, and walked hurriedly.

I have a feeling today is going to be a rather messy day.
Posted by zgmfx09a at 12:50 PM