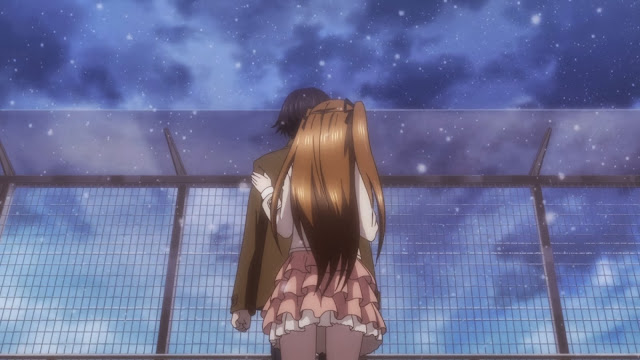 A late Happy New Year to everyone!

DM here with a quick write-up of White Album 2; Nek0 and I had a $5 bet on which ending they'll choose to do for the anime series, and the show has already gotten about 1/3rd of the way through the story.

The anime has followed the VN relatively faithfully up to now, though they excluded some minor(arguable?) scenes because of the 13 episode time constraint. I feel like they've done a relatively good job of not deviating from the original material though. However, I've heard from several friends that they thought it stopped being interesting and has since dropped the series, but what they didn't understand was that this is supposed to be the intro (hence the name of the game).

For those of you who've been following the anime so far, what did you guys think of it? For those who haven't played the VN, were you surprised at how intro chapter ended? Also most importantly, who are you rooting for now and have you jumped ship between Team Kazusa and Setsuna?


P.S. AGDQ 2014 (Awesome Games Done Quick), a video game speedrun marathon for charity will start on January 5th at 12 PM EST and run for 7 days. If you're even semi-interested in video game speedruns, be sure to tune in. Go here for more information: http://marathon.speeddemosarchive.com/
Posted by DrkMercenary at 6:50 AM