Amidst the never-ending whiteness, Shiika’s silhouette could be seen slowly wandering about on the streets of the residential district.

Due to her having to constantly avoid the chase of the goggled Mushitsuki, both her body and mind had reached their limits. It seemed as if just a slight faint push from the winter breeze, was enough to make her fall.

The sceneries that expanded before and behind her, who was slowly trudging forward, were completely different in comparison.

Under the devastation of the glowing blizzard, nothing was left behind the path she had walked. Deserted houses were distorted, wire poles were shattered, and concrete floors were uprooted violently. Everything that existed in that space was silently crushed to powder before dispersing amidst the wind.

Shiika rubbed her hands for a moment, and blew out a mouthful of warm air trying to warm them up. Pure white snowflakes that fell from the sky were starting to pile up lightly on her scarf covering her collar.

Unknowingly, real snowflakes had begun to fall, mixing in among the floating snow surrounding Shiika.

Shiika raised her head lightly, and noticed the glowing firefly floating right above her. Being enveloped by the brilliant snow that it created and the natural snow, it continued to radiate with bright aura.

Shikka whispered that line at the firefly with a weak smile.

But suddenly, she blacked out without any warning.

And then --- she collapsed.

It wasn’t until a loud sound echoed in her surroundings that caused her to come back to her senses.

After a good, long while, she finally realized that she had collapsed onto the snow. Her body was frozen stiff still, and she could hardly even feel her limbs anymore.

The loud sound that seemed as if it was coming directly from within, once again rang throughout the residential district. The storming snow caging her was scattered, even its wind direction was changed.

She didn’t have any spare strength left to even ask that question.

She could only feel the loud sound, which sounded as firing from a cannon, gradually close in on her. As the sound got closer and closer, the storming snow surrounding her would chip away bit by bit.

Shiika suddenly stood up, causing the snow piled up on her back to immediately fall off.

She then once again made a step forward aimlessly.

She must run away.

If she were to stop here, her existence would disappear.

The sudden anxiety was driving her body, pushing her to move forward.

“Why… did it have to turn out this way…”

“That is because as long as we live, we will harm those around us.”

On hearing the sudden voice, Shiika immediately turned her head around.

The scene in front of her was clearly engraved into her retina.

Since when did he start standing there?

A silhouette that seemed so fragile and ethereal as if it would disappear at any second, yet also seemed more vivid and stronger than anyone else.

A boy in black was standing there.

For an instant, Shiika thought she was looking at her reflection through a mirror.

But that was not it.

Aside from their age being similar, there was not the slightest similarity between her and the figure that was concealing his identity.

But, just from first glance, she felt that she and the boy in front of her were alike.

She did not feel any fear.

Even though he had the exact same outfit as the ones that had been attacking her a moment ago, in her eyes, this boy was not a frightening existence.

Or maybe, she might have already forgotten what fear actually feels like. Her mind was becoming hazy, which gave a feeling that she had forgotten many things.

White smoke could be seen coming out from the pistol that the boy was holding in his hand. If the loud sound from earlier were to come from his pistol, it meant that this boy in front was actually the first one ever to come to her side by his strength alone.

The her, who everyone was afraid of, who everyone would flee immediately after seeing her presence… only him, only this boy who she felt was alike, came to her side.

Shiika, and this boy who claimed to be (Kakkou), silently exchanged glances for a while.

During this time, Shiika could feel the emptiness within gradually expanding.

The boy called (Kakkou) didn’t say anything, or do anything.

In Shiika’s eyes, it seemed as if this boy covered in injuries was crying.

Her consciousness that was drifting away, immediately cleared up upon hearing that.

The fuzzy image of her family slowly emerged within her.

The school that she went to everyday ---

As well as the smile of the goggles-wearing teenage girl, who had acknowledged her dream,

Something that she had been treasuring in her heart for a very long time.

The goggles-wearing teenager praised that it was a nice dream.

That’s why, right now… she feels reconciled and sorrowful to have her dream devoured by this white firefly --- by the existence of (Mushi).

The hand that held the pistol, suddenly shuddered.

“Your dream is very similar to mine…”

Seeing the boy nodding his head, a burst of joy suddenly filled her heart.

Someone who has a similar dream as her ---

Hoping to find a place where one belongs. This boy in front of her had been hoping to realize the same dream, and had been protecting it till now.

Shiika looked up at the white firefly.

The firefly obediently listened to Shiika’s last wish, and gently flew in front of her.

If only… I could make up the resolve to stand for my dream from my (Mushi) a bit sooner… a bit earlier… it probably wouldn’t have come to this end right?

But the Shiika now does not have any strength left.

If so, let’s entrust everything to the boy in front of her then, entrusting him the resolve to stand for one’s dream, and the courage to fight against the (Mushi); let’s entrust it all to him…

Hoping that one day, he could realize the same dream as her.

Shiika held onto the tiny white firefly, and handed it towards the boy.

(Kakkou) immediately widened his eyes. He seemed to have been perplexed by Shiika’s unexpected action.

“I don’t have any dreams left … that is why, I’m going to give my dream to you. If one day, you are able to fulfill your dream, please remember my dream as well, okay?”

Tears began to roll down from the corner of her eyes.

The tears that she originally thought had dried up long ago along with her emotions, overflowed with her feelings once again.

“So, please don’t ever give up on your dream!”

(Kakkou) silently gazed back at the crying Shiika.

Just from looking at his silhouette, she could tell that he must have had many difficulties of his own. That dazed standing posture of his, seemed like a lost child who didn’t know where to go, didn’t know which road to pick, and that’s why he just stood there.

But then, he clenched his lips.

Showing an expression as if he had finally decided --- finally found a path to move on, and nodded his head:

The boy then gradually raised his pistol, and aimed at Shiika’s white firefly. 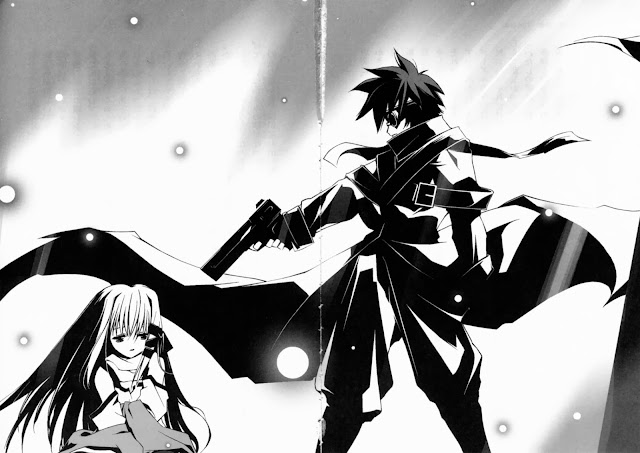 She could tell; the confusion and vulnerability enveloping him from before, had transformed into a strong will.

The finger that was pressing against the trigger was infused with more strength.

“You must remember your dream as well.”

The smiling Shiika, and the (Kakkou) who was clenching his lips, exchanged glance for the last time.

A heavy gunshot then echoed throughout the streets of the residential district covered in snow.

While hearing the echo of the gunshot fading away, Shiika could feel her consciousness, and her dream, falling deep into the darkness ---

Below are some CG that drawn by Artist KRR in regard to this scene, enjoy ^^. (long hair shiika is the best~) 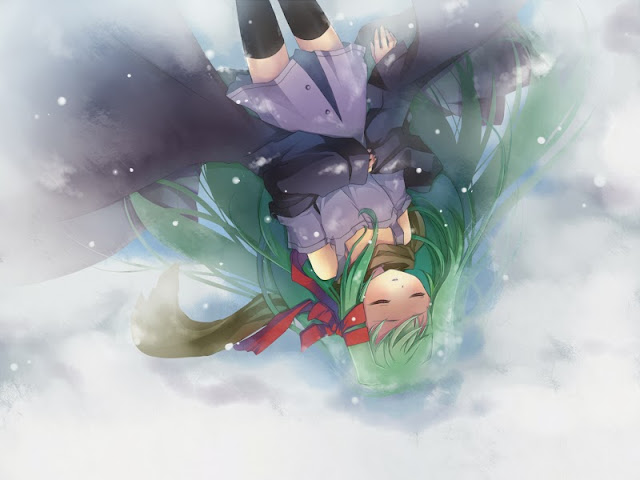 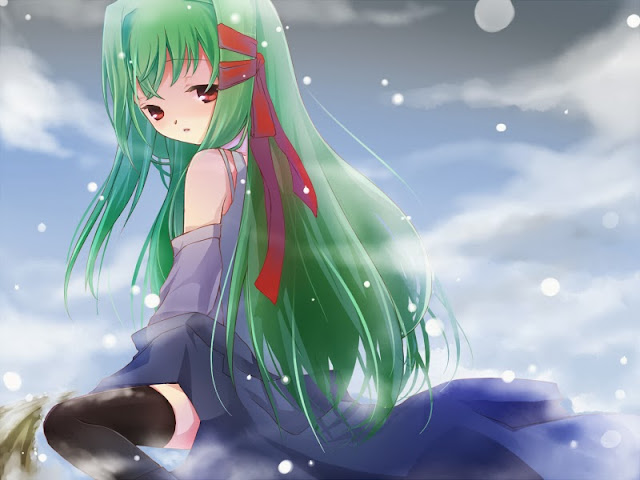 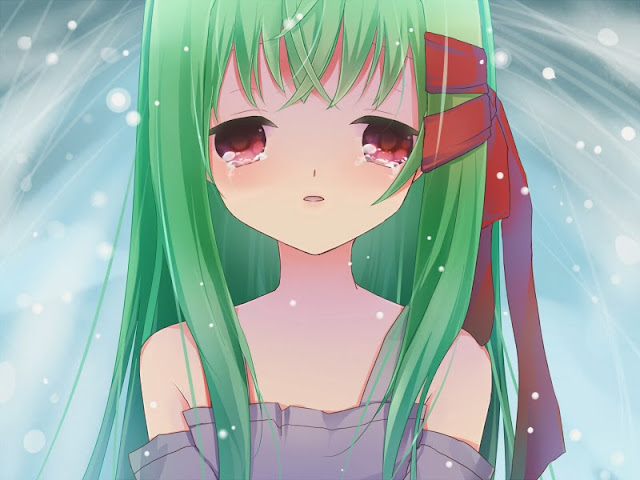 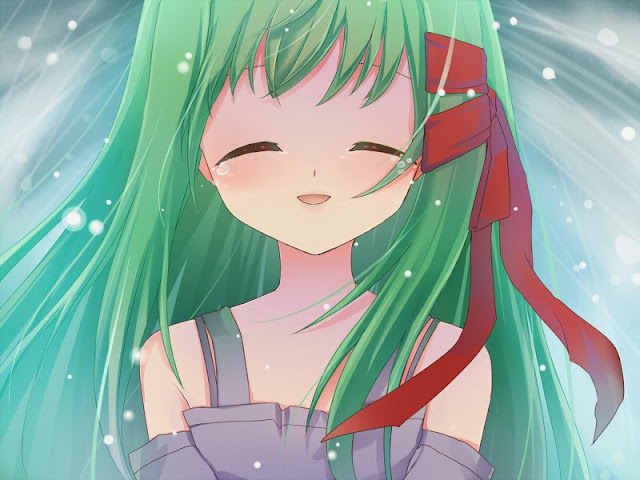 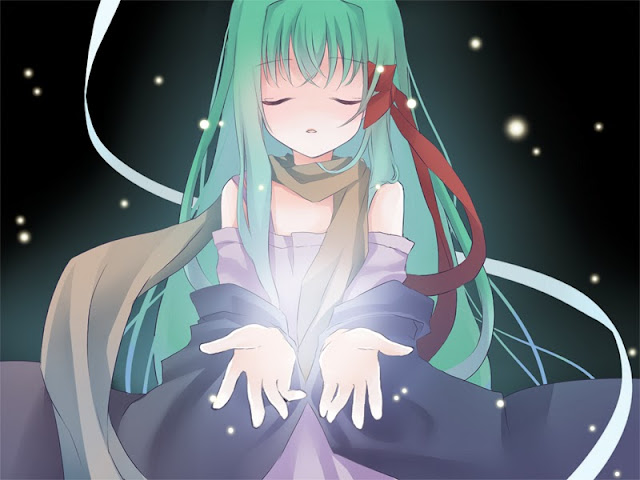 PS: No duh you're cold Shii-chan xD, who wears that outfit in winter lol,
Posted by Wing at 11:36 PM