In 5 years, everything will come to an end, one way or another. 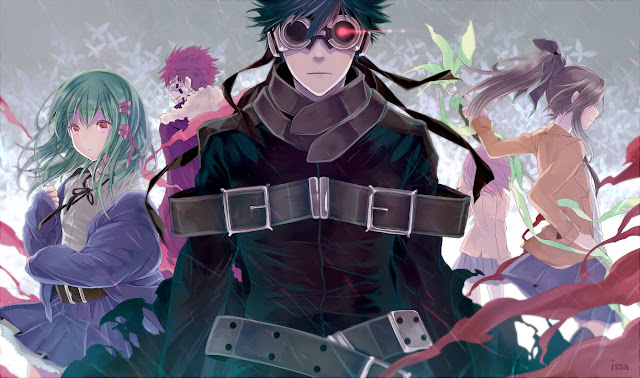 
After seeing (Kakkou) off, Haji shifted his gaze back to the devil in front of him.

“Thank you very much for listening quietly on the side, Branch Director Takakuwa.”

“--- Do you know the reason why I appointed you, a rookie that was just recently recruited, as my assistant?”

Takakuwa Azuma, who had been silent till now, finally spoke with his low, elderly voice. Not just his looks and his aura, even the voice emitted from his throat, was filled with overwhelming presence.

“It was indeed an unconventional promotion, as if lightning had struck from the sky. I’m sure many around me were full of envy.”

“It was because I know you’re the same as me, despite our methods being different. Even though I don’t know what you’re trying to pull behind me, I really liked those cunning tactics of yours --- Is this how you’re going to repay me, Haji Keigo?”

“We both are careerists. Even after knowing this kind of situation would happen, you still recruited me as your companion; I have to say, you’re really broad-minded, but speaking of disappointment – it is the same for me as well, Branch Director.”

Silence began to shroud their environment. Although it was a bit late, Haji had already issued the martial law towards the local government agencies through the SEPB. In the radius of several hundred meters, no one should be allowed to pass through.

“What you’re planning --- will end in failure.”

Even after hearing Haji’s words, Takakuwa’s expression did not change the slightest.

“Depriving the control of the SEPB, and taking in all the Mushitsuki that were registered as members, using them to stage a coup, and change this country --- That is what you said to deceive the members of the East Central Division right?”

The man, who was never shaken, twitched his brow for the first time ever.

As if he was trying to stop Haji from continuing, his glare became even sharper and more fierce. To ordinary people, just facing his glare alone would cause them to immediately cringe and freeze on the spot.

However, Haji still put a shallow smile, and bore his glare as if it was nothing.

“Using Mushitsuki to make this country fall into chaos --- and then let other countries invade us.”

“The existence of Mushitsuki will continue to increase. Sooner or later, it will develop to a stage where we can longer conceal its existence to the general public. Our country will no longer able to suppress their power--- that’s what you had been thinking about. And which is why you’re now planning to use them and make this country fall into chaos, and then trigger the involvement of other countries. There are many countries who are coveting our country’s capital. Once there’s an opening, invasion will most likely become a reality.”

Haji put away the shallow smile on his expression, and started glaring at the man in front of him.

“And then, use the overwhelming military force of other countries to wipe out (Mushi) --- and Mushitsuki altogether.”

“It was none other but yourself that’s most afraid of Mushitsuki’s existence.”

The man who had his real intention exposed, still continued to put on a resolute attitude, looking directly at Haji.

“This country… is just too corrupted.”

Takakuwa then shifted his gaze away from Haji, towards the deserted road up ahead.

As if it was trying to cover up the road shrouded in silence, a tiny snowflake began to descend from the sky.

“The existence of (Mushi), is something that should have never existed. It’s a poison that will eventually overtake this country someday. But even after knowing this --- this country did not try to exterminate it, nor does it have the ability to. It’s indulging itself in brief peace, turning a blind eye away from the dirty things, engulfing in idleness and pleasure. To prevent things from turning to a point of no return, we have to thoroughly clean the issue from its root. Otherwise, the corruption of this country will not stop.”

“Look, even the SEPB that was specially created to control Mushitsuki, was nothing but a paper tiger. When abnormalities such as (Fuyuhotaru) appear, I can easily foresee the image of its destruction. The only way to save this country --- is to wipe Mushitsuki’s existence out completely, and rebuild it all over again from its very roots.”

“Looks like you’ve already given up trying to protect this country by yourself.”

“The country itself has no such power, it can’t be helped.”

The man’s calm tone still remained unchanged even in this situation. Haji smiled once again.

“Just not so long ago, our country’s diplomat and other countries’ diplomats have signed a secret treaty.”

“It’s about the Mushitsuki ‘s --- non-interference agreement within five years.”

Takakuwa could not help but widen his eyes.

“You said non-interference agreement?! How’s that possible, when did they sign such ---“

“It really did cost me a lot of time and energy to get all the connections I need… and a lot of things happened too.”

“Including SEPB’s Central Headquarters, many people wanted to continue concealing the existence of Mushitsuki. Although there were not a lot of countries that signed the treaty, and those who promised to provide support probably had their own motives and plans… but nonetheless, it will give us the buffer time we need. I guess this pays off a bit of the huge fund we paid to the other countries in return for signing the treaty.”

“Buffer? Buffering time you say? What do you think obtaining a few years of time will do anything to change this country?! What exactly are you planning on doing to fight against (Mushi), the existence that should have never existed?!

“Didn’t you say this earlier? This country does not have the power strong enough to suppress Mushitsuki. But, just then, we have finally obtained that power.”

“Obtained… the power? Where is such a thing?!”

“You should’ve seen it, just a moment ago.”

Takakuwa showed a baffled expression before falling into silence. And then immediately he was stunned for a moment as if he had realized something, and then hammered his fist down on the car’s roof.

“That Mushitsuki, who doesn’t even know what the hell is going on, is the power needed to change this country?! Ahaha, there’s gotta be a limit to how foolish your idea is. Isn’t that kid still lost? In my opinion, my daughter is far better than him. But since she has turned into a Mushitsuki, it’s a shame that I will eventually have to exterminate her as well.”

“It is impossible to become stronger, without being lost first. Someone like you who has never experienced it before, will not understand even at the end of your lifetime.”

“Stop spouting nonsense! I will not hand this country to the likes of you!”

“Mmm, for you, this level of downfall is probably nothing but being tripped by a small stone. Using the authority that the Takakuwa Family had built up till now, it’s just a matter of time before you return to the front line…… but ---“

“No matter how many times you come back ---“

He did not shout, or strengthens his grip. But facing his glare, the terrifying gaze that had never changed before, was wavered for the first time ever.

“I will crush you thoroughly, as many times as I need to. Those who send their children as bait just because they became Mushitsuki, have absolutely no right to even talk about this country…!”

Next one should be out soon, hopefully I can clear Shiika's part of volume 0 during Thanksgiving.
And~~ I have a feeling that Haji is the final boss lol, he has foreseen it all, everything.
Posted by Wing at 12:10 AM