Part 2 of chapter 1.
Sorry for the large delay between the two parts. I stayed in China for longer than expected, and due to jet lag, forms that I had to fill out for my college (that feeling when you sign loans, urk), paperwork for various other stuff, planning classes, games, anime/manga, and other general distractions, this came out late.

Thanks to Asololo for editing this! ／人◕ ‿‿ ◕人＼"I want you to form a contract with me and become [my editor]!"


The king was to depart from the castle gates. The king rode aboard a large black automobile of the highest class that was fortified by a magic coating, a legacy of the old civilization. In front of and behind the king shone columns of fully armored silvers, the most elite knights in the country. They were led by four captains and three generals. Aside from these, there were the Imperial Guards, foreign diplomats, and a few chamberlains....

The automobile that the king was in was at the center of the formation, surrounded by chariots and the knights, all from this country whose entire military numbered in the thousands. A country's ruler setting out was definitely not an insignificant matter; many persons of importance accompanied the king.

Mahiro bowed deeply towards the king who was looking out of the windows of the automobile. The king nodded once, and then faced straight forward.

After hearing the order, the maid who was driving the vehicle sounded the horns, and the procession started moving slowly, not unlike a continental train. It took several minutes for the entire delegation to leave the castle gates. The sudden emptiness of the wide foregrounds of the royal castle that was left behind felt a little desolate.

In the passenger seat of the car sat the old general who wore a black eyepatch, looking back over his shoulders. He was Schlevan, the White Mage, one of the king's old friends, and his most trusted confidant.

“Despite his playfulness, Mahiro is not without his virtues. Especially outside the castle, in town.”

“Isn't it good that he leaves the castle often, then?”

The king lightly raised his hand in response to the waving hands of the populace alongside the road. The automobile, a restored relic of the ancient civilization, was capable of moving at a faster rate, but it moved slowly, in order to match pace with the marching army around it.

“He really is a kind person. If he found the maids trying to kill rats or stray slimes in the castle, he would definitely stop them.”

“Heh, this is the first time I've heard of that.”

Schlevan laughed in a hoarse voice.

“Good grief...He's been saying that nonsense forever now, doesn't it ever grow old?”

On this continent, where countless lives, as numerous as the stars, have been lost, why did someone like him, who could not even allow the killing of vermin like rats, exist? Especially amidst all the political maneuverings and ploys that existed in the royal palace.

“In this world, being a wise king is enough. Being too kind to not even kill a bug...in times of peace, it is a virtue that is worthy of admiration, but...”

“Then, I cannot even begin to wonder why you forced the prince with such a cruel task if he is like this. Well, I wonder how the prince will handle this.”

The old man caressed his long beard, and held back a yawn.

“This is merely what I expect of his abilities. In case that Mahiro really proves to be a big idiot, I left Edelweiss behind.”

“Well, now that you mentioned it, she is there. Well then, the country will be secure, and...”

Schlevan sank his body into the seat, let out a big yawn, and then started to softly snore. The veteran maid seated in the front passenger seat glanced over.

“With all due respect, Your Highness, if there are any problems...”

“If you heard, you should understand. The problem is Mahiro, so I left Edelweiss behind. That's all.”

The maid, while slowly maneuvering the handle controlling the vehicle, let out a troubled sigh.

“That is true, of course. I heard the talk regarding Prince Mahiro, if it is Edelweiss-sama, then...”

“A few days ago, I found him sneaking into our changing room, so with the full force of the maid group, we went to beat him u-, erm, um, I mean, to educate him a little...”

“Then, please excuse me.”

The king imitated the old general by folding his arms and closing his eyes.

Mahiro gazed silently, through the opened castle gates, at the procession marching away on the country's largest road until the last ranks disappeared into the distance.

Pariel was the first to speak out of the senior officials and personnel left behind to watch over him.

“Then, Prince Mahiro, what should we do first? Everyone, please wait for the Prince's orders.”

With that, Mahiro turned around to face the group. Everyone had already replaced the shocked, troubled appearance that they usually wore around him with one of honest devotion towards their lord.

Hearing this outburst, Pariel grew more worried than anyone else.

Mahiro cried out suddenly. He raised his clenched fists high into the air, almost as if trying to pierce the heavens.

With that shout, he used up all of his air in his body.

Gon. Pariel had reflexively hit him with her clenched fists.

“Prince. What? Freedom, was it?

“I, right now! I have finally obtained freedom with these hands of mine! The unending dream that all humanity desires! In this appropriately democratic country, true freedom!!”

“Father is not here! And all the important generals left with him!...So right now I am...”

Mahiro suddenly cut off his words and thrust his thumb into the air.

“Hey hey Pariel, I am the king, you know? King! Day in, day out, I'll have no limitations imposed on me! In other words, right now, I have become someone who is emancipated from the pains and toils of labor!” [TL Note: He's using a formal word for “to become”, but there's really no direct English translation, I just put in another word fitting the context.”]

“Is that you using difficult words like emancipated, idiot prince?”

Pariel questioned, but the prince, in his elation, did not hear her.

Rather, the king thought he would use this opportunity to force the prince to manage the country and to become wiser. Even he, who knew the prince's nature, probably did not expect such a huge idiot.

“I hereby order you as the king! Officials! Where is the Minister of Internal Affairs, Kalro?

A small man, though quite portly, came running up to Mahiro. Mahiro flourished his cloak with an over-exaggerated motion, and held his hands afloat in the air.

“I order you to gather up all the females between the ages of twelve and thirty-five, dress them up in maid clothing and-”

The strange age limits spoke volumes about the seriousness of the prince. At that moment, everyone in that courtyard must have thought that the prince was a genuine idiot.

Why is that? Because I thought the same myself.

“Erm...excuse me, Your Highness, that order...are you serious about it?”

While the minister was flustered by shock, Pariel butted in.

“Prince! Did you not hear properly the king's speech? Stop saying these unreasonable things, you're becoming less and less a proper prince! This isn't the time for jokes! We don't even know when the Empire might invade us!”

“Pariel, did you yourself listen to Father's speech properly? They won't be here until after half a month, right?”

If that was really true, then the king would not have entrusted the country to Mahiro. So it meant that the country was still not safe yet.

“Heh. No matter what you say, I'm still the king! After living that long, oppressive life under careful watch in the palace, right now this freedom is calling to me like food does for a starving wild animal! That despotism, oppression, tyranny, those restrictions placed on me, can you find anyone else in this kingdom who suffers from such inhumanity?!”

It's the end. Everyone immediately thought that the curtain would be brought down over the country's few hundred years of tradition, and it would instead become another part of the Empire.

A sound akin to that of thunder came from the back of Mahiro's head, rending the air and echoing everywhere.

Mahiro, who had fallen to the floor, turned around to behold a single maid, who held in her hands a relic from the old civilization, a forbidden tool used for educational guidance purposes – the legendary slapstick. [TL Note: Kanji is written as 張閃, meaning “flash spread”, but the furigana is given as ハリセン (harisen), a Japanese slapstick used in manzai.]

Uniform, neatly cut black hair. Eyes that were as cold as ice. She was the leader of the maids of this country, and as Mahiro beheld her, he rapidly blinked away the stars that were flying in his vision.

That cold voice. This person always gave off the feeling that she was never surprised by Mahiro's actions.

Head maid Edelweiss. Whether it were the chamberlains or the maids, this person commanded all of the vassals that served the royal family. Not only that, she also commanded the most elite of knights, the Imperial Guards. It would probably be simpler to call her a general instead of a maid.

Of course, she was also Pariel's superior. Luckily, she was Mahiro's arch-nemesis.

“Did you not depart along with Father?”

“Do you have any last words?'

After seeing Mahiro cower, Edelweiss turned around to address the assembled vassals.

“Have no worries about His Highness. So, let us just await the king's return with patience. Everyone, return to your stations.”

Everyone assembled, who would not have moved even if Mahiro told them to do so, sighed with relief as if a typhoon had just passed by, and obediently dispersed.

Edelweiss was like the very embodiment of discipline in the country. The upholder of public morals.

“Even though...there was only one piece left...to finish the Pandora's box...”

“That's not something to despair about, is it?!"

“You say that because you don't know how wonderful freedom is....”

“Your Highness, you are being very irritating right now.”

What a merciless person.

“You must keep a tight grip on His Highness's reins. You are not his escort for nothing.” 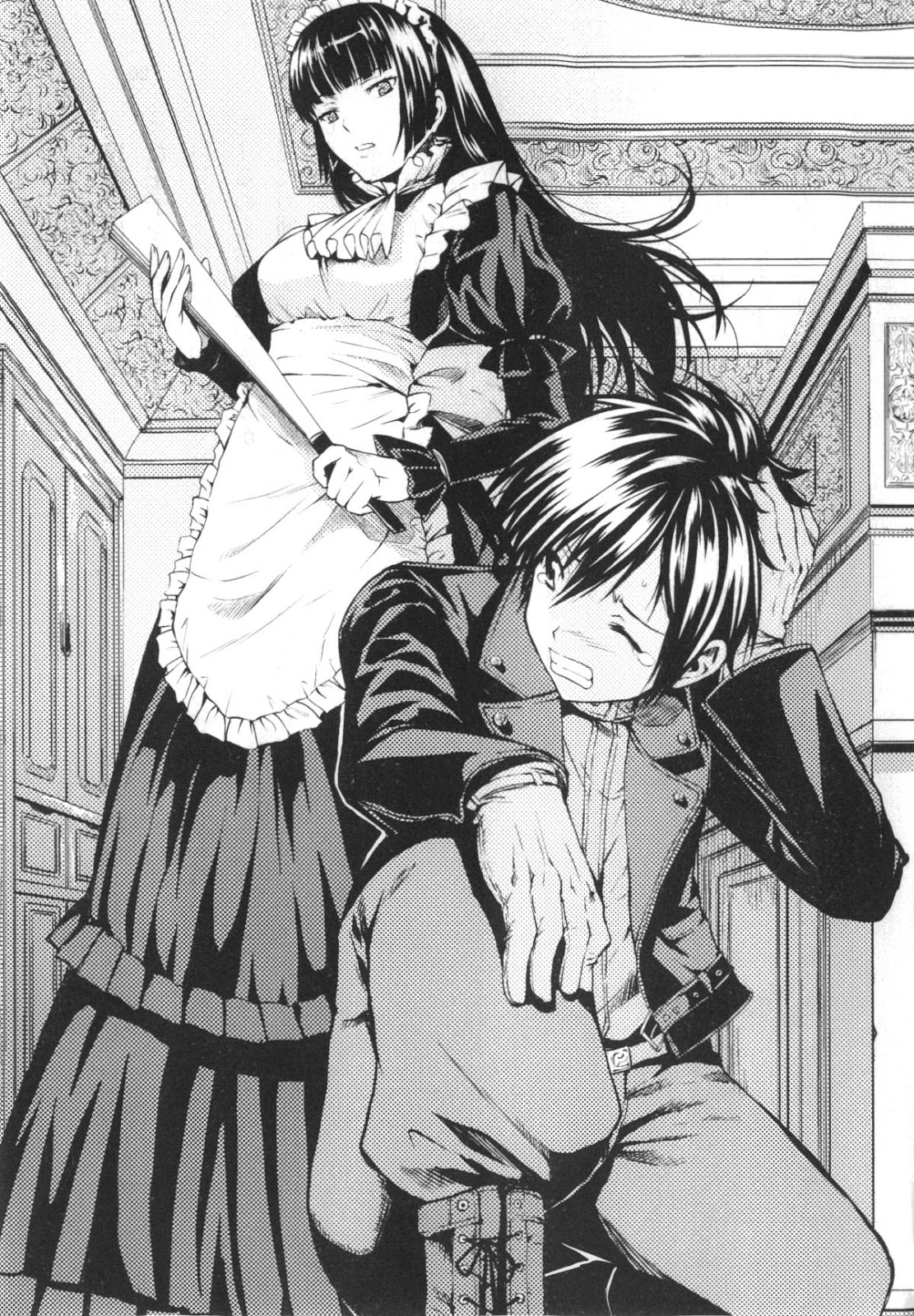 “Ye-yes...but...I've already tried, I mean, I have already attempted to stop him, but it was to no avail. If this continues I might go mad from trying to stop him...” [TL Note: She stumbled trying to talk politely here.]

Pariel refrained from commenting on Edelweiss's statement. An escort's task was to protect her ward from danger, not to discipline or to teach him. Assigning her such a task was barking up the wrong tree.

“The prince looks pretty sturdy. I will allow a bit of violent treatment as long as he could make a full recovery.”

She really was a merciless person.

“Then, Your Highness, please excuse me.”

“So how should I act as king?”

“I leave you the freedom to decide what is proper to do. ”

Translation, “I don't need you here.”

Pariel always thought that she would never want to anger this person. To put it in another way, it was amazing, in a sense, that the prince, who gets treated this way every time, was not discouraged from his hobbies.

“In other words, to say it plainly, I'm not needed?”

Crying and screaming like someone would from a teen drama, the prince ran off towards somewhere.

Edelweiss, who was left alone in the castle, did not smile or sigh, and instead, simply stood there with no expression on her face.