The passerby of this volume, I wonder if anyone remembers her xD.

The streetscape that came into the view through the black goggles, gave an unrealistic feeling as if one was looking at another world.

The smile of pedestrians walking by under the sunset, began to overlap with her expression that was reflected from the glass window.

The long hair that was supposed be there, was cut last week for the reason of making it easier to move for her. Covering her eyes and nose, was a pair of mechanical goggles. Her slender lips was fixed in place with a “—”shape, just like a doll.

Those who knew her identity probably wouldn’t have recognized her if they were to see her current self. Even she herself felt that way too. There was no way that this figure, who was currently wearing a heavy long coat and a pair of giant mechanical goggles that blocked half of her expression and, looked like a 17 year old teenage girl.

Sitting on the back seat of a Mercedes-Benz that was speeding on the highway, a middle-aged man who sat next to her spoke:

Takakuwa Minori turned around, and saw that the man was glaring at her with a pair of sharp eyes.

She, however, wasn’t moved by this. The fact that this man would show such expression no matter what kind of situation he faced— Minori understood this more than anyone else. Over the past few years, she had never seen him smile even once.

Takakuwa Azuma --- The man who’s currently holding the position of the East Central Division branch director under an organization called the Special Environmental Preservation Bureau. And at the same time --- her biological father. With his combed back hairstyle and sharp glaring eyes, he always emitted a domineering atmosphere around him.

There were only Takakuwa Azuma, Takakuwa Minori, and the driver in the car.

“This country is over already…”

“It has already been a few years since these dream-devouring (Mushi) appeared... But over the past few years, what has this country done? Other than creating this ambiguous organization, the Special Environmental Preservation Bureau, in order to conceal (Mushi)’s existence and furthermore capture them?”

In order to capture and conceal the existence of (Mushi), which were hidden from the public, this country had once used conventional weapons to fight against them. But because they couldn’t fully cope with the (Mushi)’s vast array of abilities, they decided to take another approach.

And the organization created especially for this purpose, was the Special Environmental Preservation Bureau.

It was abbreviated as SEPB by most people, and its main function was to train the captured Mushitsuki, and then militarize them in order to capture other rogue Mushitsuki. Those Mushitsuki who worked under SEPB were grouped into various squads that suited their specialty; the Combat Squad, the Intel Squad, the Inspector Squad etc. Those who defied the rules— would get their (Mushi) killed and turned into Fallen.

Takakuwa Minori was classified as a Kashu level three ranked --- in the current SEPB, such rank was considered almost the strongest.

“This country…has too many incompetents that aren’t even worth mentioning. Yet, each and single one of them harbor things that many have desired for. Money, status, and (Mushi)… the authorities that rule over these right now, are completely corrupted. Their existences are the ones that should be overthrown; we must replace them with suitable candidates chosen by the supreme law. Do you understand, Minori?”

The Takakuwa family was a Windsor arch that had been taking roles in positions that supported the country every generation. Back at Minori’s place of origin, there were many portraits of her ancestors that were hailed as heroes. She was raised in that kind of environment.

Even so, the person that she respected the most was still her father. Up till now, her father had always stood victorious no matter what kind of dreaded situations he faced, and protected this country. As a result, the Takakuwa family received honor that was never obtained before; its authority even reached the root that supported this country.

“This country has already forgotten justice. I cannot allow that to happen, do you understand?”

Takakuwa Azuma reached his hand, and caressed Minori’s hair as he said that.

Feeling the hard sensation coming from his touch, Minori narrowed her eyes and nodded. The feel of her father’s sturdy yet warm hand was her favorite. At the same time to her, who was always isolated from those around her due to her status, it was her only consolation as well.

“The power that you have obtained, it exists for the purpose of fulfilling the Takakuwa family’s role. As a proof, you’re stronger than anyone else. It’s your mission to help me correct this country, and put it back right on track.”

From the nodding Minori’s hair, appeared a white-colored butterfly.

Its appearance looked very similar to an Appias Paulina, but the delicate patterns on its wings were completely different than the normal one. In addition, the shape of its wings gave a sharper feeling as well, and its body was much slender.

Just then, from within Takakuwa Azuma’s pocket rang the sound of a cellphone’s ringtone.

“It’s me --- no problem, that’s within my expectation. The reinforcement sent by each division… Yes. I understand. Sent the correct location to (Namie)’s goggles. I’ll directly be in charge of the East Central Division’s force.”

(Namie) --- That was Takakuwa Minori’s alias given by the SEPB. It was named after the (Mushi) --- [Namie Shirochou] that was resting on Minori’s shoulder.

“I have long expected this day to come… the day when an overwhelmingly strong Mushitsuki appears.”

Ending his talks with that line, Takakuwa Azuma put away his cellphone.

“The capture target this time, has already defeated two entire Combat Squad divisions. From this point onward, we decided to alias the capture target as (Fuyuhotaru), and at the same time classify the target as an Ishu level three ranked Mushitsuki. That should be the highest ranked title ever given to an Ishu if I remembered correctly. In other words, including you, there should be less than a handful that could stand a chance against her.”

Minori's heart began to race as nervousness and excitement suddenly filled her heart.

Just at that instant, Takakuwa Azuma showed a smile --- upon seeing his smile, Minori could not help but gasp. In her eyes, her father’s long lost smile was always so stunning and striking.

“Aaah, the time has finally come. Minori, you’ll be leading the unified squad consisting of all the reinforcements that came from other Divisions and the Headquarters. You have to make them all work together and focus all of the SEPB’s firepower onto (Fuyuhotaru). I’ll be leading the East Central Division.”

“Me leading the unified squad…? Rather than the East Central Division?”

“It's a strong Mushitsuki that we have never ever encountered before. No matter which division it is, they all want to capture this Mushitsuki whilst paying the least casualties and claim her for their division. And precisely because of this, each division is willing to send their strongest members to gather here. And I deliberately accepted their requests while demanding that the unified squad must be led by an East Central Division member as a condition. And you, are the only one that’s capable of leading the unified squad that consists of all of the SEPB’s main forces.”

“Didn't I say it before? I have already expected one day such strong Mushitsuki will appear. If you harbor such naïve thoughts and think that you can capture her, you’re most likely to get yourself kill. That’s why, you must bear the intention of killing the other party and fight.”

“Although it is only for a while, I still feel uneasy letting you go alone like this.”

Takakuwa Azuma’s hand again caressed Minori’s cheek. Just this warm sensation alone, was enough to blow away all of the confusion Minori had in her mind.

“Even if my plan were to succeed, I cannot allow (Fuyuhotaru), such an uncertain factor, to stay alive and threaten our country. You’re the only one that can defeat (Fuyuhotaru), Minori. The duty to protect this country, must be fulfilled by the Takakuwa Family.”

Being stroked by her father, Minori nodded her head forcefully. As long as this sensation stayed with her, she felt like she had the courage to face any kind of situation. And no matter what kind of enemy she came across, she would definitely be able to continue realizing her dream --- the dream to protect this country. 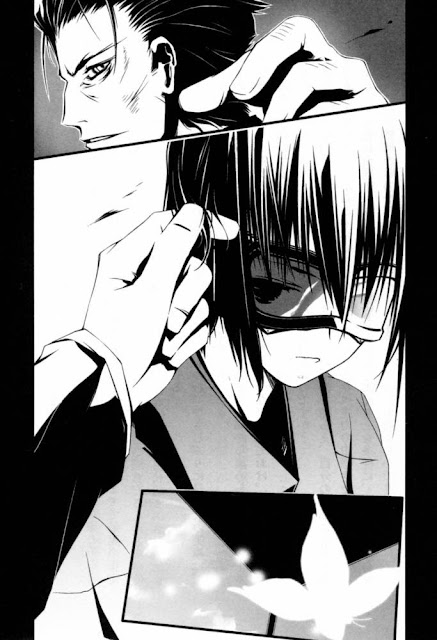 Accompanied by a weak electronic sound, an image suddenly appeared onto the lens of the goggles that Minori was wearing. On the Ouka City’s map that appeared, there was a route that lit up; it must be (Fuyuhotaru)’s escape route.

“Kashu level three ranked member (Namie), will be taking charge of the unified squad, for the sake of defeating this country’s enemy --- (Fuyuhotaru).”