In a sea of trees shrouded within the mist.

The humus on the ground stuck itself to the soles of the shoes with each step taken. The skies were blocked by the rich canopy, thus sheltering the ground from the sunlight and heat.

Deep within the dark and damp sea of trees.

Leon sighed as he stepped on the damp and sticky ground.

In his right hand was a huge sword the length of an adult. He brought it along with him just in case, but there was no need for him to use it this time round.

"With the existence of that water tank, it wouldn't be surprising if there are Yuugenshu here."

Two weeks ago, he visited this island under the orders of the Queen. This time around, he used the absolute authority of a Sennenshi to come here, and obviously so without any approval from the Government Sector. Tenketsu Palace <Sophia> and the Government Sector will be having a conference in the near future, and the issue of trespassing should be brought up during the meeting. If so, the number of times that he trespasses the island should be of no issue, since their response on the matter would not change.

"Then again, everything's the same as it was two weeks ago."

The absence of people on the island as well as the hidden facilities — everything was the same as it was when he and Sheltis visited this place two weeks ago. This included the state of destruction of the secret underground passage caused by the Yuugenshu that was named 'Slumbering Child'.

— Was that the only water tank used to breed Yuugenshu?

Leon's purpose in revisiting the floating island was to investigate that.

They discovered a water tank two weeks ago. Should there be any remaining water tanks around, he might be able to use that and find out the people behind their installation......

"I guess there's nothing else I can do...... moreover, I have left Syun-rei by herself in the tower."

As he recalled the face of the Priestess whom he left at the tower, Leon began to walk towards the direction of his aircraft.

Then came a incredibly feeble presence which disappeared almost immediately.

No wait, something's not right here.

He turned around in an instant and increased his grip on the great sword with his right hand. 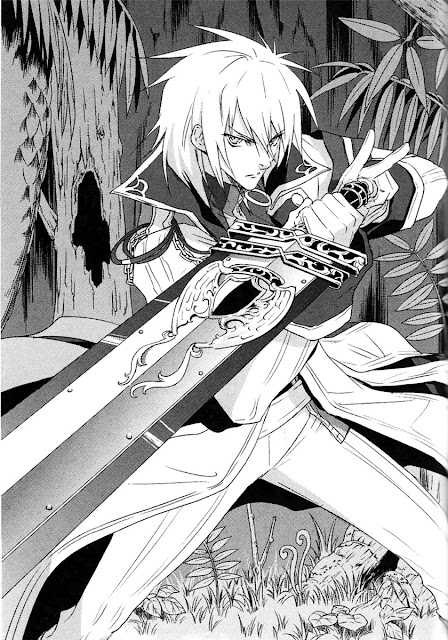 There were only trees before him...... nothing felt out of place.

The malaise in him had disappeared as well.

He could only hear the rustling of the leaves around him.

He widened his eyes and held his breath for ten seconds...... twenty............ after five minutes had passed, Leon finally took a breath. —Whatever.

Whenever something like this happened, Leon has never once questioned himself if it was just an illusion.

It does not matter even if there is a foe ambushing him. Till the moment when they strike and he apprehends them all......

"You better be careful."

After announcing that to the deserted forest, Leon turned his body away once more.

Deep in the sea of trees, after the silver haired young man had left—

Another five minutes passed by.

A man with a black fedora suddenly appeared from within the trees.

"Even though I had already concealed my presence to such a feeble state...... I am speechless by how he could detect me."

He shook his head and shrugged.

"Alright. Since I am lucky enough not to be spotted by that scary Sennenshi, it's about time I began my work too...... oh?"

He quickly lifted his foot which was about to step on the ground.

There was a plant next to his foot which was bearing red fruits on it.

"Ahh, there are wild strawberries here too."

Igun-I - a tall and skinny man in a black suit with golden buttons - exclaimed in delight.

"There's another one here. Ah, there as well. I should be able to bake a wild strawberry pie with this many berries around me."

A jet black suit with a jet black fedora. Amid the blackness, he readjusted his pure white gloves properly before picking up the red fruits carefully with his long and slender fingers.

The silent sea of trees.

Only time was flowing at the depths where not even the smallest animals could be seen.

"Phew— this should be enough."

Igun-I gingerly hugged the plastic bag filled with wild strawberries before resuming his steps yet again.

"Geez, it's really tough being an errand boy. First, I have to go to the nature sector at the floating continent. Then I have to make my way to the Floating Islands <Archipelagos> that was so far away...... Oops."

While carrying the bag of wild strawberries with one of his hands, he used the other to press on his fedora.

— So as not to let his fedora get blown away by the breeze which came through the gaps of the trees.

"What a teasing wind that was."

His charming lips curved upwards while his eyes remained hidden under the brim of his fedora.

Igun-I stopped in his tracks, lifted his head and looked at the building before him.

It was a facility built with dark grey walls. The walls were almost covered with lichen. Looking at the building from above, the lichens provide a camouflaging color that blends the building into the tender-green colors of the trees around it.

There were no windows and doors. One could not make out the number of stories of the building from the outside.

"...... That's just too careless of them. The reason Tenketsu Palace <Sophia> discovered its existence is because they had left it unattended for too long. The 'Lords' do possess incredible capabilities, but their lack in the sense of crisis remains much to be desired."

Next, he fished out a copper-yellow pocket watch from his chest and confirmed the positions of the needles. It's not those type of electronic clocks that can run for thousands of years, but those wind-up types which needs its batteries changed once every few years.

"Everyone laughs at me for using this antique, but I guess I like things like this the most. It is the best way to experience the sense of flowing time."

*tick tock...... tick tock......* As he stared lovingly at the longest hand that ticked by every second, Igun-I began walking towards the facility filled with lichen.

"Mr Maha should be putting on quite a show right now. I guess I'll begin with the things on my side as well."

There's only twenty-nine hours left till the rendezvous of Igun-I and Maha—
Posted by zgmfx09a at 9:40 PM