[Eden v2] Epilogue: The thing in which he protects

Iris shall now be changed to Ilis. I'll explain why later.


"I've heard you need a month for a full recovery."

"But I'll be really bored if that's the case. So please work hard and recover fully within a week."

The machine crystal <Ilis> was placed on the table next to the bed.

In response to the slow-talking conversation partner, Sheltis could only sigh and turned his body while lying on his bed.

Tenketsu Palace <Sophia>, twenty-second story - the tower's hospital. It's a twenty-four hours operating hospital that takes care of everything within the tower, ranging from the prescription for general colds to the performing of major operations. They open their doors to everyone inside, regardless of whether you are a guard or a staff of the tower.

"Then again, it's really great. The aircraft could operate normally, and the mission was successful as well. Incidentally, you've managed to survive as well."

"So my most important life is actually something of an incidental occurrence to you......"

"Didn't the doctors say so as well? If the impact was slightly off from where it is, your skull would have been smashed, and the pieces would have pierced your brain."

"Whoa— stop! I don't wanna think about it at all!"

Three days ago, Sheltis left the Floating Archipelagos <Lagoon> in a state close to death, and returned back to Tenketsu Palace <Sophia>. He was taken straight to the hospital for emergency treatment right after he arrived at the tower. It was just a crack on his skull — even though the usage of the word 'just' may be slightly strange, that was exactly what the doctor had said. Considering the fact that they are treating countless of guards who are taken there each and every day, it is of no surprise that the injuries which Sheltis had sustained was nothing more than just a typical injury in their eyes.

"Oh right, there's a total of four people who came to visit you while you were sleeping soundly in the morning."

"Yes, and that is a present for you."

There was a strange looking safety helmet on the table. He was wondering what that thing was.

"Seems like it is named as 'Skull-correcting Helmet'. It will read your brainwaves and adjust the pressure on your head via the machines accordingly, and can reconnect your broken skull in an instant. But beware, do not overuse it."

"...... The only people who'll make such weird machines like that are probably Eyriey and Yuto."

He had not seen the two girls since they jumped off the aircraft with their parachutes. He was worried, and the fact that the girls had made it out of the adventure on the Floating Archipelagos <Lagoon> without suffering from any major injuries was probably the only blessing amid all the bad luck.

"Out of the remaining two people, the person to come first is Leon. Probably somewhere around four-thirty in the morning."

"Isn't it a little too strange to be visiting at a timing like that?"

"He said he's rushing off for the morning training. And then he said things like how you will have to continue training your body even if you are staying in the hospital...... and the details of the aftermath of the mission."

"Firstly, the report for the mission was already submitted to the Queen. With that, the mission will be considered as completed, and according to the rules of the reward system, it seemed like you'll be rewarded with a considerable amount of points...... however, do remember not to mention to anyone about the mission which you had taken."

The floating island within the airspace of the Government Sector, which was not shown on the map. The unknown facility, the underground passage, as well as the Yuugenshu which was incubated in the water tank.

Queen Salah. The person who stands at the peak of all the shinryoku practitioners of the floating continent; the figure in Tenketsu Palace <Sophia> who leads the Priestesses. Did she know about the facility found on that floating island?

Sheltis stared at the ceiling in a daze, with no intention of replying to the machine crystal <Ilis>.

— The Forbidden Crystal. That was what the girl had said. 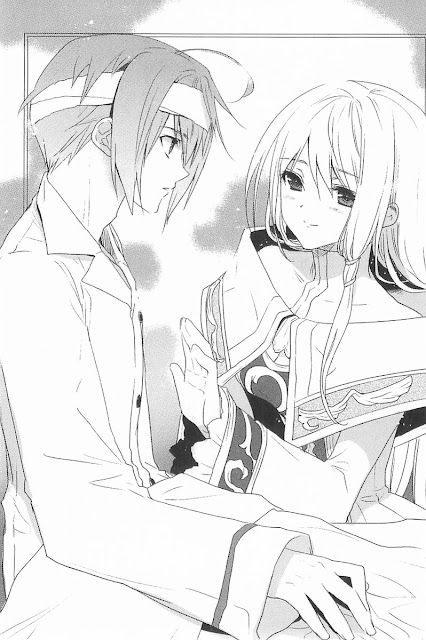 They were separated by the shinryoku and the mateki, and forced apart by an absolute blank territory which can never be overcame.
"Who were you protecting, for you to suffer from those injuries?"
"...... Why?"
Why could she say that with such certainty?
"Because the reason for your injuries is usually because you were fighting for someone."
The young girl who is his childhood friend showed a slightly sorrowful smile.
He knew that very well, but he still did not wish to see it with his own eyes — that smile on her face.
Therefore, Sheltis replied with a single sentence.
"She's the same as you."
"The same?"
"The same as how Ymy trains hard everyday, so that you can become a Priestess."
In response to the young girl's widened eyes, he continued on,
"I happen to hear it by chance from a girl who used to be an apprentice-Priestess. The Priestesses has always been looked upon as someone really incredible, or an incredibly sacred existence...... me included, I've always had that sort of impression."
But that's wrong.
Beneath those beautiful smiles, what sort of painful disciplines must the Priestesses and those aspiring to be one suffer?

"The Priestesses who live on the top floors of the Tenketsu Palace <Sophia> are alone. In order to protect the floating continent, they have devoted their whole lives to training and maintaining the barrier. However, who will be the ones to save them from their suffering?"

When Monica told him that, he swore that he will say this to Ymy,
"It's been tough on Ymy too. You must have underwent the disciplines for the barriers, and that's the reason for you to come here at such a time, right?"
"............"
For a brief moment, she looked like she was about to cry, but she tried her best to hold back her tears.
Ymy turned her face away in embarrassment.
"Eh? Ehehe...... it just feels a little regrettable. I originally hoped that you can say that to me personally after you've became a Sennenshi............ However, I am still really happy."
"Mmm, I'll do my best to become a Sennenshi."
During the latest mission, he finally understood how far away the goal was from him, especially back when he was walking towards it without any sense of direction.
As the him from three years ago did not know anything about it, he had neglected the steps which he should have taken. It was perhaps due to that very reason that he had slipped and fell to the ranks of the cadet guards, right at the very bottom.
However, it seems like he now has the confidence to climb upwards, one step at a time.
"But thank god that you are not in a life-threatening state."
Ymy placed her hand on her chest and heaved a sigh of relief.
"I really won't know what to do if Sheltis were to fall into a state of coma just like that."
"That's just exaggerating. See, ain't I all fine here?"
"You can't— You can never take things too lightly!"
...... There's really nothing I can do about you.
He showed a wry smile upon hearing Ymy berating him with a tone akin to a mother who is scolding her child.
"It's really unlike Ymy, for you to be that worried."
"............"
He originally thought she would deny it angrily, but instead, she lowered her head.
"............ Because......."
"Ymy?"
"Because...... what am I going to do if you didn't come back, just like how things were three years ago?"
The young man fell off from the floating continent into the Garden of Corrupted Song <Eden> during a mission three years ago, and he never came back. This time, the mission required him to head towards the Floating Archipelagos <Lagoon> - the young girl was afraid that the same thing would happen again.
Her slightly trembling shoulders were clearly displaying the state of feelings which she was in.
At the same time, Ymy's previous words reappeared in Sheltis' mind.
After listening to Leon explanation about the mission at the two hundred and eighty-seventh story, she actually made a request. If he remembered right—

"Could it be, the reason for you to want to join us in the mission, is because—"
"...... Will you laugh at me if I say it's because I was afraid?"
The fear in her. The fear that the young man, who have finally returned back to Tenketsu Palace <Sophia>, will once again never come back after heading off to the Floating Archipelagos <Lagoon>.
Due to the uneasiness in her, Ymy had voiced out her request for joining along as well.
"— No."
Sheltis shook his head as he looked at Ymy, who was still lowering her head.
"Thank you for worrying about me, but I am really fine."
"...... Mmm."
Ymy finally raised up her head. The expression in her eyes was just like that of a lonely orphan, which caused him to had an indescribable feeling of affection towards her.
"It's about time you take a rest. You must be tired, yeah?"
"...... You're right. I'll do just that."
After standing up from the chair, Ymy took a deep breath. Those emerald eyes of hers looked like they were about to shut tight, perhaps due to her fatigue.
"Well then, Sheltis. I hope you can recover quickly. Within three days."
"...... Somehow, it feels like Ilis was a little too benevolent, since she told me to get well within a week earlier on."
"Fufu, I am just joking. Goodbye—"
The silent ward. After waiting for the sound of her footsteps to gradually disappear—
"—How tiring."
Sheltis collapsed back onto his bed.
"One of the cute things about you is how you love to act tough."
"Hmm?"
"It must have been really difficult for you to prop up your upper body just now, right? The doctor did say you'll be temporarily experiencing giddiness and headache."
"...... How can I possibly say such things in front of Ymy?"
He heaved a heavy sigh towards the machine crystal <Ilis> on the table.
"That does make sense. If not, she'll probably be even more worried about you."
"She is such a worrywart. And for her to specially come down to the hospital...... has she forgotten about her position as a Priestess?"
"Oh— But you are really happy to see how concerned she is for you, right?"
"............ I don't know."
He pretended not to hear Ilis' snickers.


Sheltis then pulled the thin blanket over his head and shut his eyes.
Posted by zgmfx09a at 9:11 AM