[Eden v2] Prologue: It all begins on that day —young man—

"Confirming the location of enemies via far-sight, they are approaching us...... Here they come!"

I shouted towards the three guards in my team.

The place I was pointing to was the dense forest no more than ten meters in front of us. At the same time, I could feel a spine-chilling nervousness that was spreading throughout the team.

All of my three teammates lifted their weapons - great sword, broadsword, and heavy firearms. I clutched my chest tightly

My weapon is something that belongs only to me, and is different from the rest of the three. It is the arts of shinryoku of an apprentice-Priestess.

A dark purple mist erupted from within the dense forest.

I had no idea who shouted that.

The mist 'object' appeared from within the forest next, as though to answer the call of my teammate.

The mist was pulsating like a living thing. Its four limbs and head were hidden in the mist, and one could only see a pair of ruby-like eyes shining brightly.

Yuugenshu — an unknown existence came here after bypassing the barriers of the Priestesses. They originated from the Garden of Corrupted Song <Eden>, which is located ten thousand meters below the floating continent.

Until now, no one knows if they are a living thing or just an agglomeration of mist. Due to that mist-like appearance, us humans refer to them as 'Yuugenshu'.

The grotesque monster pounced towards us.


A strange sound rang through the meadows, a sound that makes one associate it with the word 'curse'.

The purple mist surrounding the Yuugenshu gave off light like an amethyst. Not long after, these light gradually turned into rays thinner than strands of hair.

Decay, venom, coma and mental destruction. It's a wave of curse that embodies all negative effects.

One of my teammates called out my name, and I finally snapped back to reality.

The rays wove themselves into a complicated spiral-shaped image, and the concentric circles were expanding outward. Just as it was about to engulf me, I sang a short verse of the prayers.


A shinryoku barrier constructed using the special language of the Priestesses.

A power that can permeates miracles throughout the world, and is thus named as 'shinryoku'. It is a wave that appears as someone is praying, which can create all sorts of miracles - the source of energy of the barrier.

The transparent blue light expanded, as though it was blessing everyone—

But it was still too late.

The mateki of Yuugenshu was quicker, and struck onto us.

At that instance, the training ended.

"Results of damage caused by mateki - all members are dead, including apprentice-Priestess Monica. This constitutes as a 'fail'. Please submit your reports within three days."

A mechanical voice reported the results with a calm voice.

All that happened within an instant...... And it ended up as a failure, before I could do anything.

I apologized quickly to the three people who was smiling bitterly in front of me.

"Well, everyone's bound to fail some times, so don't take it to heart. Just reflect on it, and make sure it don't happen again."

The captain nudged the barrel of his machine gun onto the Yuugenshu with a *klang*.

Or more specifically, a mechanical dummy replicating the looks of a Yuugenshu. It's the same for the mateki - it was harmless rays of light created with the ingenious use of mist and black light.

"It will be fine if you understand that. Alright, it's about time I go to sleep."

Everyone returned to their own rooms after the training. As for me, I ran out of the first floor of Tenketsu Palace <Sophia>, into the training grounds by myself.

It was late night, and most guards and apprentice-Priestesses of Tenketsu Palace <Sophia> should be sound asleep by then. Silently going to the training grounds in the middle of the night had already became something that I must do every single day.

Two silver slashes of the swords cleaved through the dark.

He was a guard wielding dual swords. A teenage boy with tea-red hair, wearing a black ceremonial clothing. His slim, slender frame of a teenage boy was coupled with a slightly childlike and androgynous face. He was probably as old as me - somewhere around fifteen or sixteen? Or perhaps even younger.

What shocked me was the incredibly impressive swordplay of his.

One, two, three and four strikes. He swung his swords gracefully, with a smooth flow of actions. I could not follow his speedy movements with my eyes, despite watching from a distance away.

There was not a single pause. The affluent streaks of his swords had no hesitation in them.

I could not pry my eyes away from that scene for a long, long time. 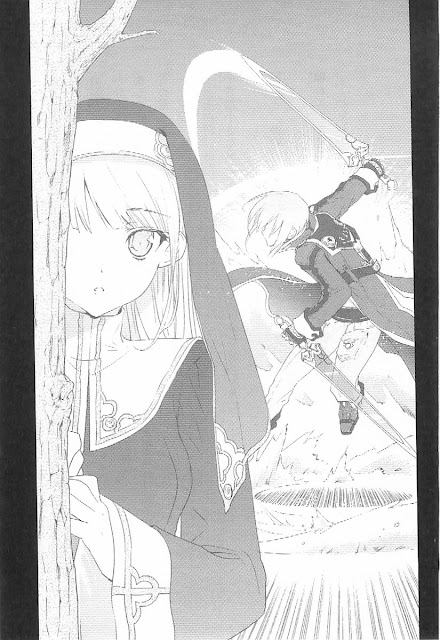 It was not due to the remarkable swordplay of his. He silently swung his dual swords daily - in the middle of the night when everyone else was still in their slumber, and during early mornings before everyone was awake. It was that hardworking attitude of his which attracted me deeply.

As I looked on, it felt like I had gained the courage to do so.

That teenage boy must have put in a great deal of time and effort, to possess such exceptional abilities. That could not be any more clearer, after witnessing his training with my very own eyes.

I will have to work harder, so as not to fall behind.

I'll work harder and harder, and then...... Some day, I will become a true Priestess.

I gave a huge nod, and turned my back towards him.

The teenage boy was still behind me swinging his swords. He will definitely continue training even after I left.

I left the scene as I hid that small thought of mine deep down into my heart.


However, the dream of that day will never be fulfilled.


The teenage boy whom I admired died while on a mission, by falling off the floating continent into Garden of Corrupted Song <Eden>.