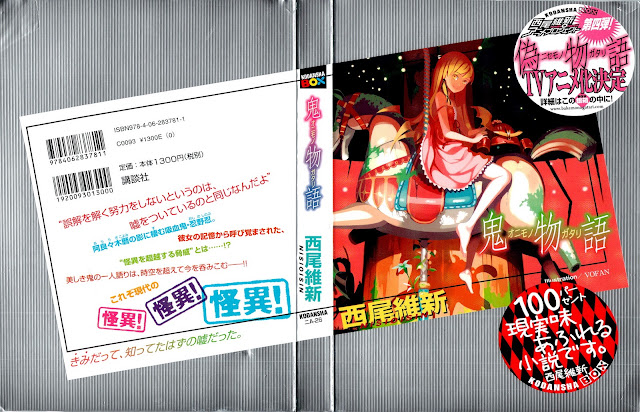 
Being a huge fan of Kabukimonogatari (and Shinobu), I have been waiting for this volume for quite a while already. I was expecting a delicious story of Shinobu, narrated by Shinobu - but alas, I am left disappointed in that area.

It's not that the story line is bad though. Set after Kabukimonogatari, after the short in the Bakemonogatari mook, and before Nekomonogatari (Shiro), one can sort of view this as a sequel to Kabukimonogatari. Not long after the dimension-travelling adventures, Koyomi was yet again involved in another 'oddity': a dark nothingness, a void, that swallows in things. And apparently, it is going for him and Hachikuji. Just so turns out that Shinobu had actually encountered that same thing several hundreds of years ago, back when she made her first 'servant'.

And so, we get a story narrated by Koyomi and him telling us how he is M, and tells us about Shinobu's past, the circumstances that caused her to make her first servant (slightly underwhelming, tbh), and the new 'oddity' involving Hachikuji yet again. It's probably because of Shinobu's heavy involvement in Kabukimonogatari, and Nisio Isin probably wants to balance that. While reading this, I was thanking god that Hachikuji's scenes in this is not as overwhelming as Shinobu's in Kabukimonogatari. However, I came to regret those thoughts later.

The book starts of similar to any Monogatari series. Lots of 4th wall breaking (Shinobu was trying her hardest to promote Kizumonogatari anime), together with Koyomi's constant sexual harassment at the girls (all of them happens to be below 12). Looks quite happy and all. In fact, for the whole 3/4 of the book, I had no idea what sort of thing the dark void is, although the signs seems increasingly ominous (Full strength Shinobu in the past was nearly swallowed by it, and it wreaked 3/4 of her body as a result). Had a guess though, and it was pretty close to the real thing.

However, when we come to know of the void's true 'identity', things were a little to late. By then, Shinobu's link with Koyomi was severed (it swallows everything, and it passed by Koyomi's shadow while chasing Hachikuji).

Before we know it, the main plot of the book finally came to light at the last few chapters: the void is part of the system of the oddity world. One can think of it as an 'oddity eraser', that erases all oddity that strays off their intended path and does not follow the rules to maintain 'balance' of the world. Kissshot was originally aimed because she played god and 'abandoned' her settings as a vampire. Similarly, Hachikuji lied about 'upgrading' back in Bakemonogatari. In reality, she was to either continue being the lost snail oddity, or obtain nirvana.

In the end, Hachikuji chose to obtain nirvana, because the void will erase people involved as well, which will mean a lot of characters from the Monogatari series. There was also nothing they could do about it, since it is the law, and it's an anti-oddity phenomenon. And so, after a short three months, Hachikuji disappeared from the Monogatari universe. RIP.

And thus, a bittersweet ending. Kinda. From the sacrifice, we at least get to know just how important Shinobu is to Koyomi. I will actually say that he values Shinobu as much as Hitagi, though he probably sees them in different views. Of course, like I had said earlier, there will be conversations that will be missed, no matter how much I am disinterested in that character.

Still, not all is 'bad' though. The book does answer about half of the questions that are in Nekomonogatari (Shiro), since Shinobu then already had her relation with Koyomi broken off. However, there is the part where he gains back the link with Shinobu, together with him fighting something alongside with Kanbaru, before rescuing Hanekawa in Nekomonogatari (Shiro). It will be quite impossible to squeeze that into Koimonogatari, when it has to end the cliffhanger in Otorimonogatari. It is officially stated that the series will end with Koimonogatari, but with still some part of the plot left unexplained, together with the rumor that has Nisio Isin saying that he will be continuing the Monogatari series, Koimonogatari may not be the last book yet.

And so with that, ends my short review, though tbh it is more of my afterthoughts. The ending gives the story a strong closure, but it still falls short of my high expectations of the book, which I had after reading Kabukimonogatari.

To end off, my edited ranking in terms of my enjoyment of the series, in descending order: