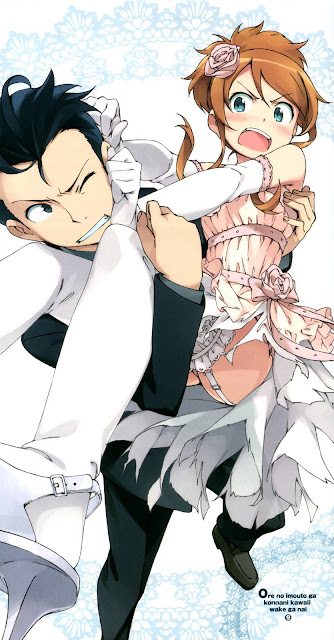 >Kirino was wearing a special dress while working at a photo shoot.
>The job was recommended to her by Misaki.
>She was in doubt as to whether she wants to accept the job, but she did so in the end.
>She felt it was a good chance for her to determine her path for the future, and also, she was interested in the contents of the job.
>However, that has resulted in her not being able to attend a concert that she had been eagerly awaiting for.
>The job way exceeded past the scheduled 2pm. It was already 6pm, and the concert should have started.
>After sending the message, she gave a sigh.
>Despite her being extremely disappointed that she will be missing the concert, she tried her best to suppress her feelings, in order to continue her work.

>Not long after, she was done with the work.
>She was chatting with her fellow colleagues. Her fellow model said that Kirino's dress was very cute, and she wished she could wear it too.
>Her colleagues invite her to a celebration party. Kirino could not decide whether to join them, or to try to go to the concert, which she was already late for.
>Just then, she heard a yell. Someone was cycling towards their direction.
>It was a guy in suit, panting heavily. There was a huge bruise on his face, and his suit was covered with branches, dirt and leaves. He seemed extremely tired.
>The bicycle was a bicycle with auxiliary wheels, but was adult sized. There's a basket in front, seat at the back, and a horn that replaces a bell. The wheels had pictures of Meruru and Arefa in their transforming sequence (read: nearly naked). In sort, an extremely perverted and embarrassing bicycle.
>Despite liking Meruru, Kirino felt it was something that is way beyond her acceptance.
>Kirino broke out in cold sweat. Her colleagues asked if she was uncomfortable looking at a pervert.
>Just when the guy was about to be dragged away by security, Kirino told her colleagues that the guy is her brother.
>Kirino was about to reprimand Kyousuke when Kyousuke interrupted her.
>He was stunned upon seeing the dress Kirino was wearing. His jaws were wide open, and after a few seconds, his face went red in an instant.
>Kirino dragged the dazed Kyousuke to a corner.
>She was wearing a pure white wedding dress.
>She went on to ask Kyousuke why he was there, what's with his suit, and what's with the crazy bicycle.
>Kyousuke felt that it would be faster to cycle there then by car, and he borrowed the bicycle from Mikagami, who he had met by coincidence. He had felt really embarrassed to be cycling that as well.
>Kyousuke then said he was there to pick Kirino up, since she had been anticipating the concert for quite a while.
>Kyousuke was the one who invited Kirino to the concert.
>'I have to go to the concert with him? Please spare me. It's just because that person wants to go with me no matter what, together with the fact that I have some interest in it, and also the fact that I had thought the photo shoot will end at 2 - I had agreed specially only due to those reasons.'
>Kyousuke asked Kirino to change, so that they can head over to the concert in the bicycle.
>Kirino asked if Kyousuke had intended for her to take the backseat. Kyousuke said yes in a serious manner.
>Kirino wondered if Kyousuke had been immune to the looks of the society, due to the various traumas that he had suffered.
>Just when Kirino was saying it will take her a long time to change out of the wedding dress, Misaki came and suggested her to go in that attire.
>Kirino thought she was joking, but apparently Misaki was serious. She worried for the sanity of the duo.
>Kirino said she can't sit on the bicycle with the puffy dress.
>Misaki tore off the bottom of the wedding dress, and said problem solved.
>With the long skirt torn off, a mini-skirt beneath was revealed. Kirino felt her current attire looked like the dress of a princess.
>Misaki said it will be a good publicity for them. Kirino retorted that what she said has got to be a lie.

>Kyousuke and Kirino headed off to the concert.
>Kyousuke asked Kirino to grab on to him tightly as they will be going down slope.
>"H-Haa? I-If I do that, then won't my breast be touching your back!? You pervert! Sis-con!"
>Kirino hit Kyousuke's back repeatedly.
>"Y-You...... kya! G-Geez!"
>'Stop wobbling about! I am left with no choice but to hold on to you tightly!'
>Kirino asked Kyousuke to watch out when the return home. Kyousuke said that she was being unreasonable.
>Kirino said he was doing perverted things to his sister, because he had played too much sis-con eroge.
>Kyousuke retorted it was Kirino's fault that he was playing eroge in the first place. Also, intimate body contact between them should not be considered pervertic, since they are siblings.
>Kirino said that recently, Kyousuke had been using the excuse 'because we are siblings' to sexually harass her. Kyousuke said she was thinking too much, and such words are not to be said to Ayase.
>The sun was setting as they were squabbling. Due to the heavy traffic, the bicycle proved to be a wise choice. However, they had attracted attention from passerby due to the bicycle and their attire.
>Kirino remembered Kyousuke had done something similar when he had bought for her the eroge late at night, and apologized to him in her heart.
>Kirino wanted to catch the new OP of Meruru sung by ClariS.
>Kirino thought of the possible pains Kyousuke could have went through just so that she can watch the concert.
>"...... How disgusting, how much of a sis-con are you?"
>Kirino thought of the countless times their had such similar conversations.
>'In order not to let myself fall off the bicycle, I increased the strength in my arms, and pressed my forehead against his back.'
>'The elder brother was wearing a suit soaked with sweat, while the younger sister was wearing a wedding dress that had its bottom torn off.'
>'Traveling on an extremely embarrassing bicycle.'
>Kirino said that they are probably the only siblings to be doing things like that. And that probably is their very own style.

>The bicycle stopped at the gate of the concert venue.
>Kyousuke urged Kirino to hurry, and grabbed onto her hands.
>The both of them ran, and Kirino could feel the stares of the people around them.
>The two of them squabbled a little, but it seemed like they had barely made it. 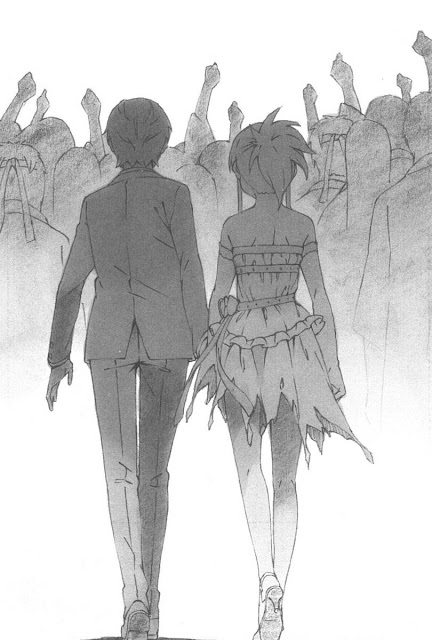 What exactly are you trying to say? Kyousuke smiled wryly.

Sigh, it seemed like my words were drowned by the noise from the crowd.

Even though I can just repeat it once again, but for me, conveying my feelings via words is a very difficult challenge for me. And those words are not something that I can repeat.

So at the very least.

I grabbed his hands tightly.

And hope that that I will not ever let him pass by me again.

Then again, this is the chapter that I have translated most lines off from the novels. That's because it is quite rare for us to see things from Kirino's point of view, and when we do, we get to see her tsundere portrayed in a really raw and revealing manner.

Probably liked chapter 3 best, followed by chapter 6. Saori's the most boring for me.

Well, not much in terms of plot development, except that the Kosaka siblings are closer than ever, and Kyousuke has sunk to a record new low in terms of his sister-complex. Not a very eventful few months after the faithful dramatic breakup. I kind of doubt the series will end at volume 10, since there are still quite a few things left to be resolved.

So, this marks the end of the huge derails of my projects. I shall resume my work on Hyouketsu Kyoukai no Eden. I hope you guys have enjoyed the rather sloppily done summaries, because I can't be half-assed to churn out full translations. For those who visit this site specially for the summaries, if time permits, may we see each other again at vol. 10.