Small droplets leap from the surface.

With colors deeper than the emerald green waters of a shoal, clearer and more vivid than the ultramarine of the deep seas.


The ceilings gave off lighting as bright as the sun - without knowing the presence of the artificial light source, one would not have thought that the place was indoors.

The mysterious waters were silently wobbling, and time were slowly passing by.

Another tiny ripple appeared on the water surface. From a brief look, it looked like something was rising upward towards the surface beneath the blue water. A human-shaped shadow was wobbling between the ripples-

It was a girl.

Her age is more than ten, probably sixteen or seventeen.

Her long, pale golden hair was shimmering under the lights from the ceiling. Despite her eyes being shut tightly as though she was in a deep slumber, her face still looks graceful, delicate and charming. On the whole, she struck a great balance between prettiness and cuteness.

The teenage girl was gently floating on the water surface, while revealing her stark naked body.

The smooth curves of the chest belonging to that of a girl's was rising and falling repeatedly, giving the hint that the girl was breathing. That was the only clue that showed that she is a living person.

Not long after the girl had floated out of the surface, there was a change within the room.

"—The designated time has been exceeded. The fluid's temperature and the osmotic pressure are both under stable conditions."

A mechanical female voice sounded along with the rays of the ceiling light.

"Body temperature, heartbeats and breathing are all within normal range. It is recommended to immediately begin the barrier training targeted against 'Garden of Corrupted Song <Eden>'. Ymy, how are you feeling?"

The girl who was being addressed as 'Ymy' opened her eyes.

With her jade colored eyes, she looked at the lighting above in a slightly dazed state.

"Verbal confirmation from the subject has been accepted. In accordance, analyzing shinryoku............ Shinryoku's waveform, stable. ...... amplitude, stabilizing at peak levels - Inquisition of Tower's Law article number two-hundred and seventy-three, 'Barrier System' has been cleared. Transition to 'Anti-Garden of Corrupted Song <Eden> Arts' has now been acknowledged."

At the same time when that had been said, the level of the deep blue surface began to fall. The fluids in the room turned into a striking purple mist, and spread throughout the room.

After the huge amount of liquid had been totally evaporated.

Ymy remained on her grounds, and lightly tugged at her fringe, which had a droplet of water.

At her feet were small puddles of the blue fluids, but they too had evaporated into an invisible gaseous state, and spread into the room.

"From now on, the special training against 'Garden of Corrupted Song <Eden>' shall commence."

The voice notifying Ymy of the situations was still of a mechanical tone, but at the same time, it had an element of respect towards the teenage girl.


"ele So Phi-a-s Arma-Riris
<Please accept all wishes that I can grant...>"


The words with power held within them.

The lips of the teenage girl began to sing the opening sequence, which signified the activation of power. The next instance, blue particles covered her naked body as though they were blessing her.


The teenage girl was singing.

From all corners of the room, came the sound of freezing.

The girl looked at the feet.

From her ankle onward, her feet was encased in transparent blue ice. That's right. The blue fluid that had just evaporated had slowly started to freeze. It was at an astonishing scale, where the whole giant room could be totally frozen.


xearcs let laphin yahe, bie omia hec lihit clar
<There is no key to the doors of speech, that is sketched by the transparent fingertip>


The ice gradually crept upwards. From her ankles to her knees, then to her stomach, followed by her chest.

The girl, with more than half of her body frozen by the ice, continued singing. That was because, the dazzling frozen world was her spell, and the requirement for the spell's activation was the prayer which she had been singing.


Her lips were purple from the unimaginable cold, and her body were shivering continuously. Despite so, as a Priestess, the teenage girl endured silently, without giving even a whimper.

Just when the ice crept past her chest and was about to approach her shoulders.

The girl, who until then had not moved an inch, suddenly lifted her head and looked towards the ceilings - no, the girl was looking towards the other side of the ceiling, at a place much further away. 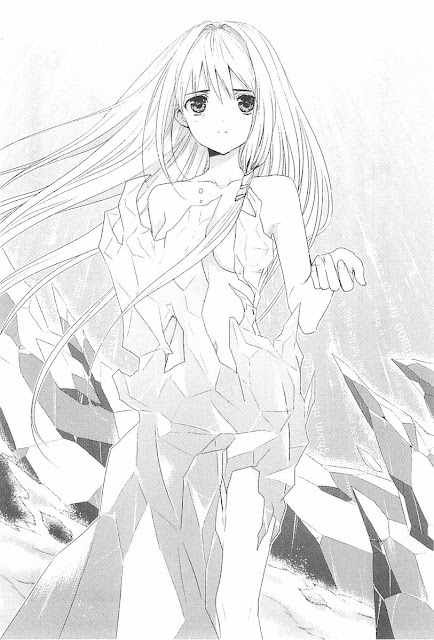 A drop of crystal clear tear slid down her cheek.

"You said that you are to become my 'Sennenshi'...... Can you really not fulfill that anymore?"

The teenage girl sank into the frozen world filled with azure brilliance.

千年獅: Sennenshi. Literally translated as 'Thousand Years Lion'. More shall be revealed in the future chapters, especially as to how the name came about.