I'll say it first. This is a <story of the lives of a brother and sister who were somehow separated from each other for sometime and for some reason were reunited again and began living together under the same roof, living their lives normally without any major incidents - much like the gentle flow of water, with no bumps or impacts>.

It probably won't be very interesting.

But of course, that is to be expected.

I feel that this is just the way how everyday life should be, for an older-brother and his younger-sister.

Well, it is precisely because of that reason that I am facing so much troubles now even after reuniting with my sister.

Let me say it again. This story probably won't be very interesting.

There won't be anything huge happening, no unexpected events and definitely none of those extremely exciting scenes.

And because we are siblings, there won't be much fan-service either.

If you guys are expecting any of the above scenarios, feel free to throw away this book now.

Because there are plenty of excellent stories out there that deal with major events, shocking twists and exciting action scenes. Those stories will definitely suit your taste better.

I can repeat this as many times as you like. This story has no intention of adding in elements that 'exist to entertain'.

That is because it is me, the very person narrating this story, that hopes for it more than anyone else...

"I have a request, can you listen to me?"

"Please sleep with me tonight."

While in the process of reading a book, I lifted my head and looked at the speaker's face. 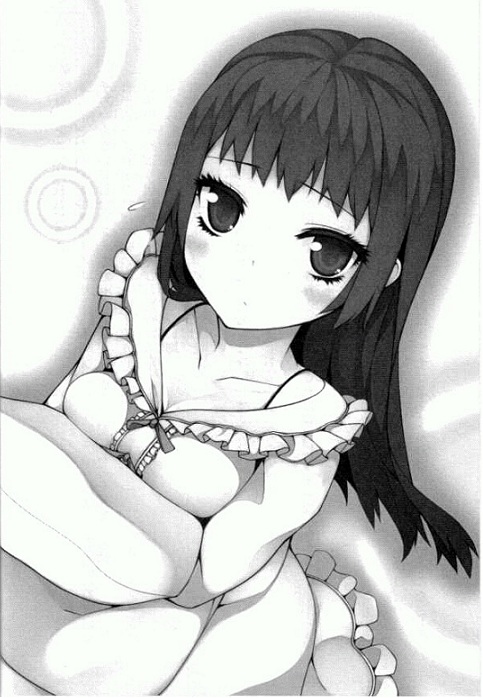 Long black hair that parts into two sides from the center. Like a (Japanese) princess.

She's totally like the beauty you would see in paintings. An undoubted beauty.

However, she is my younger sister.

I took a sip of tea and continued.

"Thinking back, I used to sleep with you in the same bed everyday back then."

"Yes, those were happy days."

"However, that was because we were still kids. Right now, we are both sixteen."

"There's a saying that guys and girls cannot sleep together after the age of seven. Your request is something that shouldn't be done by blood-related siblings who are in their teenage years, understand?"

Upon seeing my sister nodding her head, I silently heaved a sigh of relief. She is more honest than I had expected.

Shouldn't it be this way?

Even if she is my younger sister, it is a fact that we've been separated for over six years.

After six years of separation, we are more like strangers rather than siblings. However, she seems to have been groomed into a beauty beyond my imagination. Why don't you try putting yourself in my shoes and listen to your sister asking if you could sleep together? I'd be surprised if nothing happens.

Is she actually that thoughtful?

My sister gave me a smile.

"I can be together with Onii-chan again from today onwards. I've thus decided to be a good girl who listens to Onii-chan's every order. As such, I've given up on sleeping in the same bed with Onii-chan."

"Hm, is that so. Well, I am really sorry. To think that we've been separated for quite a while, and yet I poured cold water on you."

"It's nothing. I am the one at fault, to have made such a childish request. I am sorry."

"All I need are those words. After six years, Onii-chan is as gentle as ever. Akiko is really happy."

With a forceful nod, she smiled at me.

She must have been too emotional at the reunion, which resulted in her saying those words just now. That must have been what is commonly referred to as "impulse".

Right. Even though both of us are going to live together in this house from now on, there shouldn't be anything to worry about.

She is just like she was. Nothing has changed. She is still a great sister.

From today onwards I should be able to live with her under the same roof without many worries.

"Even so, Onii-chan has became really daring."

For some unknown reason, Akiko said that with a slightly shy voice and a flushed face.

"Compared to Onii-chan, I am just a kid. As expected of Onii-chan."

"Hmm? Really? I don't recall saying anything like that."

"To think that our first night is not to be done in bed, but outside...... Even though it is really embarrassing, I'll still try my best."

"What are you talking about? What does 'first night' mean?"

"The very first night that a pair of lovers embrace each other."

"No no, I am not asking for definitions from a dictionary. When and why has the topic changed to that sort of thing? We should be talking about sleeping in the same bed, no?"

"Wrong. We are discussing how Onii-chan and I are to spend our very memorable first night together, right?"

I knitted my eyebrows and said after a slight pause.

"...... Look, I have no idea what you're planning, but I have never thought of spending a so called 'first night' with you."

My sister's voice suddenly increased by a pitch.

"That, that's a lie, right!? Is that a joke!? To say that you do not want to embrace your first night with me, that's absolutely impossible right!?"

"We've been separated for six years!"

"No, that has nothing to do with six years. We're siblings!"

"But prior to the fact that we are siblings, we are male and female!"

"No no, commonly that should be reversed. Prior to a male and female relationship, we are siblings."

I said and again as I knitted my eyebrows.

"Let's get the facts straight for now. You and I, we are siblings."

"Yes, separated for a long time and finally getting back together again. Living together from today onwards, a pair of irreplaceable siblings."

"And that means? To have our first night together?"

"We are blood related siblings!"

"Love can overcome that obstacle."

"There are no different types of love. To love deeply or to love superficially that is the only thing that matters when it comes to love."

Her arguing skills sure have improved since the day we were seperated.

"Right, so you do understand?"

"It's late into the night and we have to get up early tomorrow. It's almost time to sleep."

"I've been waiting for a long time. I am already mentally prepared."

"Good night, Akiko. I am going back to my room to sleep alone. You should sleep alone in your room too."

My sister shrieked. Her face became similar to that of a character in a manga. However, we are siblings and thus it can't be helped, right? Although she tends to stick a little too close to me.

"How can you do that? That's too much, Onii-chan!"

"Definitely not, I've made the most rational decision."

"Why are you allowing yourself to be brainwashed by common sense? We just so happen to be siblings, right?"

"Even if you are nonchalant about it, it's a huge matter if blood-related siblings were to do that sort of 'sleeping'! Get it?"

"But we haven't seen each other for six years!"

"Even if it is sixty years, the result will still be the same."

"To think I was really looking forward to it! To think that you would actually crush the innocence of a young girl. Onii-chan is a really horrible person!"

"Compared to the innocence of a girl, the dos and don'ts between siblings are much more important."

"It's just a pair of lovers spending the night together, why can't there be intimate body contact!? Isn't this weird!?"

"That. Is. Why! You have conveniently ignored something! Putting the lovers relationship aside, we are siblings, no!?"

Letting out a sigh, I took a quick glance at my sister.

My sister was looking at me in a stance that says "I beg of you" with teary eyes akin to those of a chihuahua.

Looking from the neck down, one can see the breasts that are growing due to puberty. It stood out from those slim shoulders of hers.

The long slender legs that put emphasize on her feminine figure.

It's only been six years, but she looks like a stranger to me now.

I cleared my throat.

My sister lowered her shoulders in dejection.

"If Onii-chan has to put it that way, Akiko has no choice but to give up."

"Really? Well, I'm sorry. I actually wanted to try to fulfill your request as much as possible."

"No, it is me who had made those illogical requests. Thinking deeper into it, it is wrong for siblings to do those sorts of things. What was I thinking... It must have been because I was too emotional being reunited with Onii-chan after so long."

"I will not say those sorts of things again. From now on I'll act how the child of the Himenokouji family should and live my life carefully. Akiko will not create trouble for you again."

"Hmm, that is some great spirit from you."

"It's nothing that great."

"Well, are those your real feelings?"

"Yes. If Onii-chan cannot accept it no matter what, I'll have no choice but to strike deep in the middle of the night-"

"Ahhh? Not only did you close the door without saying anything, you actually applied both locks? How am I going to strike in the middle of the night? That's too much! That's really too much!"

It seems like she was saying something unreasonable beyond the door, but that's not my problem. I buried my head into the blanket and covered my ears completely.
Posted by zgmfx09a at 3:18 AM