"Garden of Corrupted Song <Eden>; The Huge Tree that Bears Red Fruits <Nexus>; Capital where Stars are Dreamed <Reinenhabe> - any one of those names are right, and each has their very own meaning. However, should you want me to come up with a name for our current place right now, I'll call it 'Garden of Serra'. This is the blank area where all Recitations are created and return to." —— Xeo 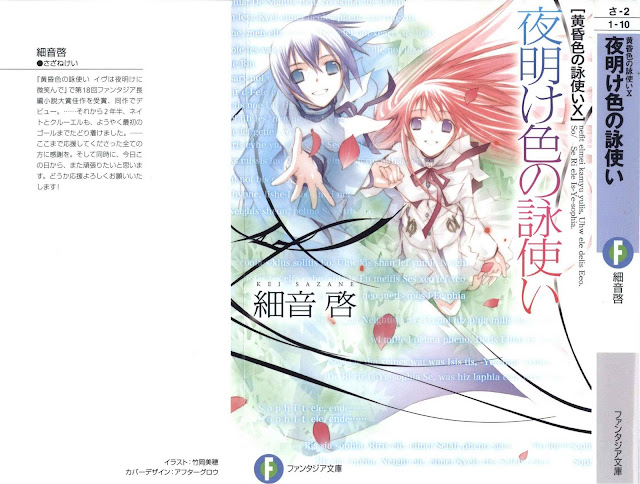 No one knew how the five different Recitations came about, but it is known that the five colors are the law of the world - no other colors should exist. Also, as it takes a long amount of time and skill to master a color of Recitation, common knowledge is that the maximum amount of colors that one can learn is only up to a limit of three. Even then, it is common for people to master only one color, so as not to be distracted and end up as a master of none.

And so, when Evhemary Yehlemihas, a female student who was supposedly studying Keinez <Red>, declares that she was actually studying and creating the Recitations of Ezel <Color of Night>, everyone thought she was crazy. All except one, a guy by the name of Xins Airwincle, who secretly reveals to Evhemary that he is aiming to become the first person ever to master every single color. They made a promise to each other that they will accomplish their respective goals, and meet again sometime in the future to show the fruits of their accomplishments.

Years later, Xins became the first ever person to master all five colors, and his color of Recitation is known as Heckt <Rainbow>. Evhemary Yehlemihas was dead however, due to her inherently weak body. As Xins lament on the lost of his only love, the focus of the story shifts to 13 years-old Neight Yehlemihas and 16 years-old Kluele Sophi Net, both studying in the alma mater of Evhemary and Xins.

Neight is the adopted son of Evhemary and the inheritor of Ezel <Color of Night>, and his existence was unknown to Xins. Kluele is a seemly normal girl studying Keinez <Red>. The fateful encounter of the two in school marks the start of the sequence of events, which brings question to the very existence of the Recitations themselves. Neight's Ezel <Color of Night>, together with Isa <Grey>, shook the foundations of the belief that only 5 colors can exist. Furthermore, Kluele suddenly has her capabilities improving by leaps and bounds, and it was later revealed that she is the holder of the legendary Grand Spirit of Keinez <Red>: the Sacred Bird of Dawn <Phoenix>. As things spiral deeper and deeper, the characters knew more and more about the secrets of the Recitations, together with the shocking truth behind the real identity of Kluele. Can Neight put a stop to everything, before Kluele walks on her destined path and disappears forever?

That's perhaps about as concise as I can get for a brief synopsis of the novels, and there are much more things that are being left out there.

Tasogare-iro no Uta Tsukai is the debut work of Sazane Kei, and it is illustrated by Miho Takeoka, the same illustrator for Bungaku Shoujo. It's a fantasy story that earns it the top 10 spots in 2008 and 2010 rankings of Kono Light Novel ga Sugoi!. As Sazane Kei is the same author behind Hyouketsu Kyoukai no Eden, and also the fact that both series are very very similar, comparisons between the two will be inevitable.

Being the first series done by Sazane Kei, the initial volumes of the book starts off raw. It is not quite as polished as compared to Hyouketsu Kyoukai. However, the improvements to his work are significant - it is simply joyful to see how much he as improve in terms of his writing by the 10th and final volume of the series. First five volumes starts off with the Isa <Grey> arc, and typical to his style, the story moves along at a steady pace. It is only at volume 7 when things really pick up. Hyouketsu Kyoukai in comparison, is a much more polished book in terms of his writing style.

The romance of Tasogare-iro is a little 'refreshing' for me, seeing how it is the main pairing is that of an older girl and a shota. Neight acts more mature than boys of his age, so I guess it is fine, but it still feels weird, especially when the three years age difference is a huge one when taking consideration of their current age. It takes a lot of getting used to, to see Neight declaring his love for Kluele and white-knighting her. In a sense, the romance of Hyouketsu Kyoukai suits the taste of the general public better. Then again, I guess the above points mentioned do sound hypocritical, considering the fact that I am someone who ships Subaru x Tomoka really hard.

Ending is fine, but very very cheesy. I won't say I hate it, but I sure hoped it will be something better. It is probably just me picking on things, and I've seen many who are fine with the way it ends. However, I do hope the author will come up with a better ending for Hyouketsu Kyoukai.

Character illustrations are pretty good, but Miho Takeoka's depiction of the combat scenes are slightly weak in my opinion. Her drawings suits Bungaku Shoujo to a tee, but for Tasogare-iro, it is a little lacking. I prefer Kasukabe Akira's illustrations for Hyouketsu Kyoukai much better, whether it is the character designs, or the illustrations themselves (especially the fighting scenes).

Some may be wondering why I chose to quote Xeo (one of the important characters of Tasogarei-iro) to start of my review, while others may have already noticed the important phrase mentioned in the quote. Yes, there are many striking similarities between Tasogare-iro and Hyouketsu Kyoukai, the most notable one being the Songs of Praises <Oratorio> of Tasogare-iro, compared to the prayers sang by the Priestesses in Hyouketsu Kyoukai (the structure of both are very very similar). Others include the overlapping terms used in the novels, such as Garden of Corrupted Song <Eden> as shown above. Should you think that it is just a coincidence, I'll provide a minor spoiler by saying that Ymy's 'form' of shinryoku in Hyouketsu Kyoukai is of the same name as the 'alternate-identity' of Kluele in Tasogare-iro: <<Arma-Riris>>.

To end off, Tasogare-iro no Uta Tsukai is a pretty enjoyable series despite its flaws, and can be considered to the the rawer cousin out of the two fantasy works by Sazane Kei. As of the current stand, I do prefer Hyouketsu Kyoukai no Eden better though, and it should continue that way unless Sazane Kei screws it up badly. If you enjoy Hyouketsu Kyoukai no Eden, do give this title a shot if you can, because like I have said, this series may very well be the 'prequel' to it.
Posted by zgmfx09a at 1:33 AM