With this, all the main characters of this volume have appeared, now let the show begins!

Shiika, who was sleeping on the co-driver seat of a luxury car, slowly turned her face towards the owner of this light.

She could not help but gasp at its beautiful appearance.

It was as if a giant crystal, as big as a mountain, had broken out of the ground.

From here she could see the giant tower and the tip of a giant dome; their silver surfaces were reflecting the sunset, redirecting them to where she was at.

“That’s “Urban”, a composite building project that started a few years ago. But due to its project being abandoned halfway, those facilities were never officially opened.”

A middle-aged man holding the steering wheel in the driver’s seat --- Munakata Kaiji, explained to her in detail.

The car which Shiika sat in was stuck in the traffic jam of an evening rush hour.

In the car’s back seat, there was a teenage boy who’s similar in age to Shiika and wore a headband. His slender eyes were half-open as he leisurely yawned.

“Unfortunately, we do not have the extra time for sightseeing, nor do we have any business to attend here. For the time being, we have to get away from the Central Headquarters as fast as possible.”

Hearing Munakata’s remarks, the teenage boy replied out of the blue.

“No…It’ll be better if we stay here for a while.”

“There has been someone lurking around us ever since Ouka City.”

Suddenly, Shiika’s gaze caught something amidst the crowd in the giant tower’s direction.

Without waiting for their replies, Shiika already pushed open the door and ran out of the car.

Ignoring Munakata’s startled voice and the teenage boy’s displeased sound of him sucking his teeth, Shiika ran towards the pitch dark alley.

Over there, lies a creature. 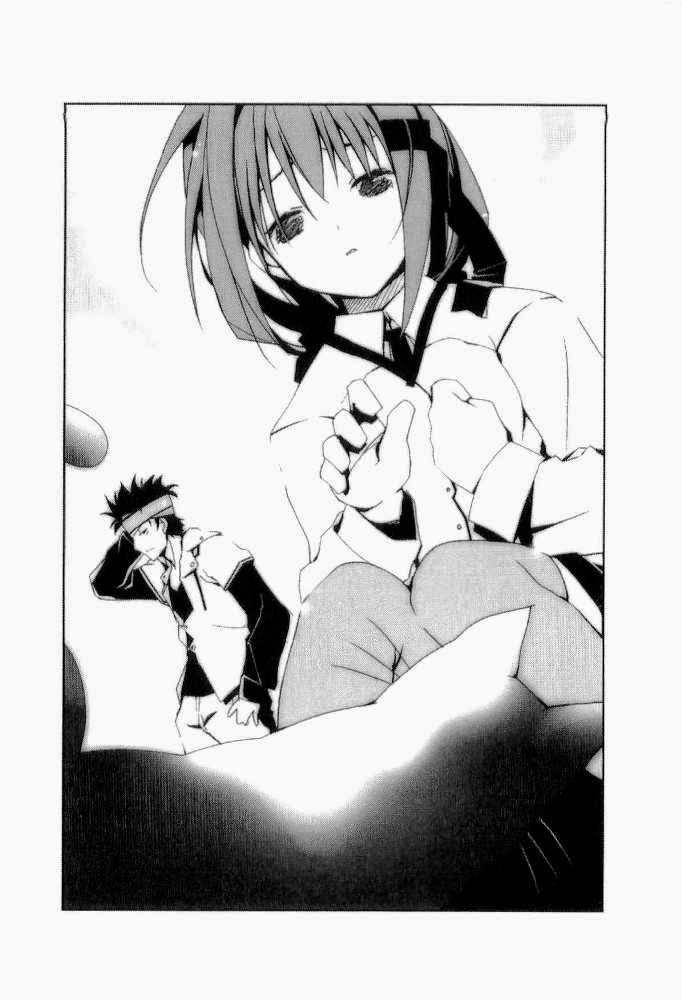 “It’s a cat… looks like it’s about to die, maybe it got run over by a car or something..”

An injured white cat was panting as it lay on its side.

Its abdomen was profusely bleeding, and its legs seemed to be fractured as well. Its beautiful white fur had been dyed crimson red from all the bleeding. Its golden pupils that were slightly open were staring into the distance as if it was searching for something.

The bloodstains on the ground extended all the way from the opposite street. Judging from the direction of the trail, it must have come from the “Urban”.

Shiika gently carried the white cat in her arms. Even without the teenage boy reminding her, Shiika herself knew this very clearly, the fact that this cat could not be saved.

Shiika’s widened her eyes in surprise.

Behind her, came the teenage boy’s shaken voice:

Within Shiika’s arms, the white cat had indeed smiled. Although its expression seemed like it was moaning from pain, the corner of its lips was no doubt curved in the shape of a smile.

That smile, looked as it was a hero who had accomplished its greatest duty, a smile filled with satisfaction.

However, its laughter was slowly fading out.

The heartbeat coming from that tiny body was also becoming weak, until it stopped beating. Even then, a smile could still be seen on its face, it was as if it was saying that --- it had no regrets.

Just then, from within the car came Munakata’s voice:

“As much as I want to, we don’t have the time to mourn for its death.”

After seeing the last scene of this tiny life’s story, Shiika uncontrollably clenched her lips.

In that instant, a cold chill suddenly ran down Konomura Chami’s spine, causing her to look up.

In the far distant of her gaze, there lay a tall tower glistening in silver --- Urban Tower.

Chami, who was walking on the street while in her school uniform, saw a cloud of red mist flying over from that direction. The mist formed into a bee-like shape in midair before entering Chami’s body.

She remained rooted to the ground amidst the crowd as if in deep thoughts. The ribbons tied on her hair in place of hair bands were swaying with wind, her eyes behind a pair of triangular frame glasses quietly staring at Urban.

A teenage girl who was walking next to her asked with a whisper. Her front hair was so long that it had almost covered her eyes; she was looking at Chami with an alerted expression rather than worried.

Chami replied with a smile:

“Nothing, it’s nothing much. Just one less pawn...”

“Moreover, help me take a look; see if you can find a white cat within a two kilometer radius of Urban. It’s most likely injured. Not those wildcats; look for one that’s more pretty and gorgeous. With your abilities, it should be a piece of cake despite these kinds of conditions right?...(Konoha)..”

The teenage girl known as (Konoha) was surprised from the sudden request for a moment, but immediately concealed herself into the dark alley and followed the instructions.

Within the alleys of the residential buildings, a part of the wall where the teenage girl’s hand was touching suddenly uplifted and gradually changed to green. A (Mushi) that had been concealing itself against the wall slowly showed its true form. Two pairs of leaves covering its giant compound eyes, it was a (Mushi) with a rather strange appearance.

The abnormal leaf insect-looking (Mushi) leaned against the wall and climbed all the way up to the roof of the building at once. After arriving at a spot with good view, it used its giant compound eyes to watch down the streets.

And then, after a few minutes, (Konoha) spoke:

“Too slow, were you slacking off??”

“The cat is near, it seemed to be injured. It walked all the away from Urban, but… its dead now.”

Under (Konoha)’s guidance, they arrived at the entrance of an alleyway of a sidewalk.

Chami lowered her head to look at the white cat that had passed out in the corner. In place of a bouquet, a bow-tied ribbon could be seen lying next to the cat. It seemed like there was someone who had sent this cat off. Chami could not help but feel an emotion of ‘Anyways, Thanks’ rising within.

One of her pawns --- That’s right, it was nothing more than a servant that Chami uses. At best, it was the first creature that she had used this ability on as an experiment.

This injury was not caused by accident… must have been hurt by large animals… or maybe even (Mushi).. If it were a (Mushi), then it must have been a separation type that uses physical attacks. I should really go to Urban to check the situation. Seriously… you’re giving me a heck of a lot of trouble here.

Deep within her, Chami began to make plans for the future. But… this incident was no doubt ---

“Looks like something has happened around Ayukawa Chiharu. Even though no crap had happened in the past five years, why is it happening during now?..”

Chami ignored the skeptical (Konoha) standing next to her and stood up.

In that instant, the figure of the dying cat beneath overlapped with an illusion of her corpse. This illusion perhaps might happen in the near future, because within Chami, there lay a great ambition that would cause her to lose her life any moment.

--- Let’s walk through this god damn life together!

“… Why are you showing such a happy face? How dare you leave behind your master and go ahead on your own just like that? You’re such an unfit servant… you know that?...”

Chami’s subtle nagging was not heard by (Konoha).

Within the lounge that had become a forest, Ayukawa Chiharu was bewildered.

The soft sensation of the nutrient-rich soil, the spikiness of the tiny grasses, to avoid pests this place was also sprayed with insect repellent, and combined with the sunshine shooting through the ceiling’s giant hole, this was literally a tiny paradise.

In the center of this paradise, two teenage girls lied on the ground across each other.

The unsightly teenage girl --- Nishito Sousei High School’s sophomore class H, Ayukawa Chiharu. She was lying on the ground with her arms across and legs wide opened, didn’t even care the slightest that her hair had dirt stuck in it as she gazed straight at the ceiling. Amidst the girls in her class, aside from the features that she had a rather slender figure and the fact that she works as a vice president of the school’s student council, there were nothing else special about her, at least that’s what she thought.

“… But there’s really nothing to compare about.”

Suddenly, the teenage girl across turned facing-up, Chiharu gazed at the sleeping face of the girl in front.

“Soo~~ Who are you exactly? When I saw that you were walking around in that strange outfit, I couldn’t help but follow after you immediately.”

Under Chiharu’s gaze, the teenage girl laid flat while breathing smoothly. Her hair which was longer than Chiharu spread radially across the field. Even in Chiharu’s view as a girl, she was quite an attractive one. Her age is probably the same or maybe slightly younger than Chiharu.

The teenage girl was wearing a similar outfit to that of patients. Aside from the fact that she was wearing an outfit that wasn’t normally worn in the streets, there was something else bothering Chiharu, and that was the red stains at the lower edge of her clothing.

“That... can’t possibly be blood splashed back at her right…? Aha..ahaha…”

Ignoring Chiharu who was smiling awkwardly, the teenage girl continued to sleep with an innocent expression.

“Could she be an assassin from a secret organization of somewhere, or perhaps a prisoner that had escaped an isolation facility? No no no, she doesn’t seem that evil. Could she possibly be a princess of some country who’s currently on the run then? Theoretically speaking, this would develop into a romance story from here on right? Hmmm… Is it okay for a girl like me to find her then? ~ Hehe.”

Supporting her cheeks with her hands, Chiharu began to let loose of her imagination.

Although most likely an answer won’t come out from this, but during the progress, Chiharu could not help but begin to smile --- Even after several sounds rang from outside, she didn’t move from where she was, simply because it only lasted for a while and she felt it would be a waste to leave this teenage girl’s side.

Chiharu used her index finger to poke her cheek, causing teenage girl to frown for a moment.