The prologue of "Dream of the sunset".

You're advised to read volume 1 of Mushi uta (up to chapter 4.01 or so) before reading this, since this branches off from there. 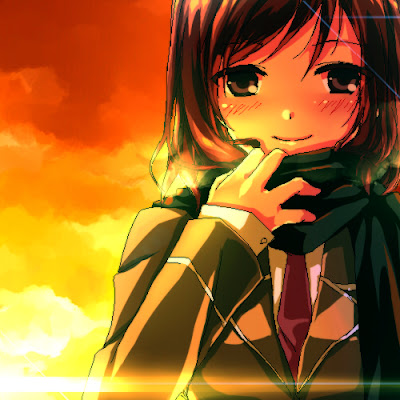 As the quilt fell off, Shiika wriggled her body and wrinkled her eyes.

As she slowly opened her eyes, a stabbing pain attacked her eyelids. Maybe it was because she had been crying before going to sleep, and unconsciously cried in her sleep as well.

She had a dream last night.

She dreamed of something that had happened to her four years before. Last morning, she had the same dream.

In her dream, she was turned into a Mushitsuki by a woman, called (Oogui), lost control of the new power --- and then had her (Mushi) killed by a boy called (Kakkou).

Her dream was going to be eaten up by her (Mushi), which almost caused her to ‘die’.

That was why she entrusted her dream to a Mushitsuki called (Kakkou), who had the same dream as her.

Shiika recalled her dream, and had come back to her birthplace, Ouka City. While being chased by the SPEB, she was taken in by a girl, Tachibana Rina.

Shiika asked in a soft voice, however, she found the space next to her empty behind the quilt nearby.

Shiika took and put on her cardigan, and got out of the bed.

She breathed out with a white puff, and walked to the door.

There came Rina’s voice from the hallway.

Yesterday morning was just the same: After Shiika woke up, she found Rina talking on the phone, just like now.

After walking out of the bedroom, Shiika could see Rina’s figure sitting on the porch closing her mobile phone.

Even without lights here, this girl’s beauty and her sense of presence still shone brightly.

This girl called “Tachibana Rina” was an inconceivable person.

Despite her being the leader of the (Mushibane), who fought against the Special Environmental Preservation Bureau, she treated others with honesty and gentleness. Though they had only met for a short period of time, this Mushitsuki girl, who harbored the same dream as Shiika, had already become an irreplaceable being to Shiika.

Rina peeked at Shiika, with an impish smile on her face.

“……I remembered something that I forgot, but it wastes too much time and takes too long to get it……so I managed to make it come back by itself.”

“Something you forgot… make it come back by itself??”

“Because it is something that wouldn’t even move no matter how you push or pull it…… Sorry, did I wake you up?”

Shiika shook her head, and sat down beside her. And then, Rina smiled, looking a little uncertain and doubtful.

“You helped me in front of your boyfriend yesterday, are you regretting it?”

The boy who told Shiika that he wanted to be her friend --- Kusuriya Daisuke. The event of them playing together at the amusement park had already become a part of the past. At the amusement park, Shiika accidentally came across Rina who was fighting against the SEPB all by herself. For the sake of helping her, Shiika revealed the secret of her being a Mushitsuki in front of Daisuke.

Daisuke had once said that he was scared of Mushitsuki, so he must have felt really terrified of Shiika when he found out the truth.

But even so, Shiika didn’t feel any regret, because she succeeded in helping Rina. She was sure that she would never regret that.

Nonetheless, if said that she didn’t feel sad at all, she’d be lying.

“Shiika, you are very kind.”

Shiika shook her head once more.

The true kind person should be Rina. If Rina hadn’t helped Shiika selflessly, she would have been caught by SEPB, yes, just like what happened four years ago.

Even the members of (Mushibane) who adore Rina, calling her (Ladybug), were also the same. Like them and Shiika, those who were saved because of her gentleness and kindness, must have been countless.

“Don’t worry, we will definitely find a way!”

Rina smiled with a strong will. Her voice was filled with confidence and optimism, making Shiika feel warmth in her frozen heart.

“How did you become a Mushitsuki?”

Upon hearing that, the girl reflected in Shiika’s pupils, suddenly tightened her expression.

But, Rina replied with a smile right away.

“Why did you say sorry first? Even though you were clearly feeling lost about your boyfriend, and after I forcefully questioned you on your identity being (Fuyuhotaru), not to mention bringing up all your painful memories from turning into Fallen by (Kakkou)…”

How can Rina have such a strong will? ---

Gazing at this cheerfully smiling girl, Shiika couldn’t help but come up with such a question in her heart.

Shiika wanted to know; what was it that made her so powerful, powerful enough to carry the fate of countless Mushitsuki in (Mushibane) on her back, to confront the SEPB, and, to smile, even while enduring the fear towards her (Mushi).

Maybe if she were to know the source of her strength, she might able grow stronger. Yes, just like this girl in front of her, Tachibana Rina ---

“About me, umm……I still don’t recognize what was the beginning. So many things have happened till now, but nothing seemed very special to me.”

Rina spoke confusedly, while pulling up her hair behind her ear with her fingers.

Even this little behavior was full of glamour, deeply attracting Shiika’s attention.

“I encountered three Mushitsuki at that time......though it sounds weird, but they were actually normal, no more special than the guys in Mushibane at all.”

“Right, I think I helped them in those days. And while doing so, I was turned into a Mushitsuki unknowingly.”

“Oh, don't stare at me like that, I will talk about it in detail --- it is better to explain things one by one rather than put everything together in a mess right? And, although I helped them, it was nothing amazing.”

“So how did you help them?”

“Though I said there was no beginning.....Umm, maybe that time when I ran away from home, was the beginning of my dream.”

In the dusty hallway before dawn, the teenage girl began to talk.

Began to talk about what happened in the past.

Akin to an old-faded-photograph-liked tale --- which Rina had experienced at that time.

While I'm working on finishing the Shiika's story, Jdyk-kun has started tling this side, so cheer~