It has been a long while since Puzzle and Dragons was released in Japan. I've no idea how its US counterpart is doing, but PaD's success in Japan was never quite matched by any other apps in the region. And honestly speaking, there's no apps which has captured my attention like how PaD did for such a long period of time. 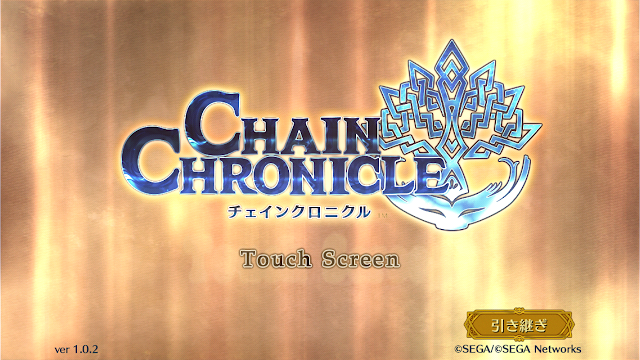 Of course, the chinese and western scene responded by copying PaD in its entirety (just short of the graphics and the name). Cheap move in my opinion. The Japanese, on the other hand, respected Gungho's ingenuity and tried to emulate their success by applying the business model into the games they created.

Recently, SEGA has released a game which, in my opinion, may finally be the game to come close to and even surpass PaD's popularity and dominance in Japan. Introducing, Chain Chronicle (チェインクロニクル). 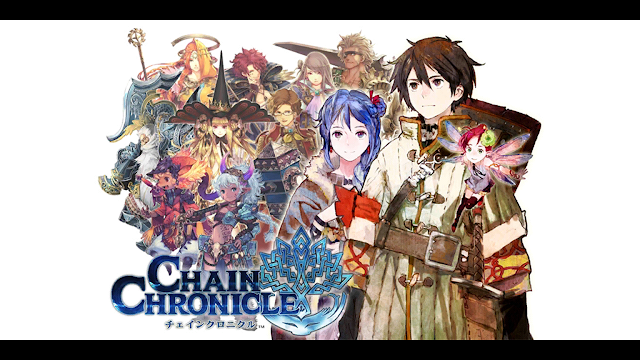 It's....... kind of like Plants vs. Zombies, but with RPG elements where you will have to level up your characters and etc. Then there's a storyline to go along with the battles and etc. Here's a sample game play video.


Pretty simple, but that's sort of what you'll kind of expect and want from a cellphone app game.

What impresses me are the production values of this game. The art, the music, the events - everything's top notch and polished. They employed a similar cash system to PaD as well, where you can roll for gacha with either in-game credits, rl cash credits (magic crystals) or obtain some boss drops via event. And unlike a lot of the other PaD-wannabes, SEGA is not shy with dishing out the magic crystals to reward players (and tempt them to spend more stones). I particularly enjoyed the BGM at the title screen, so I'll just upload a few pictures of the cards as well as the BGM below. 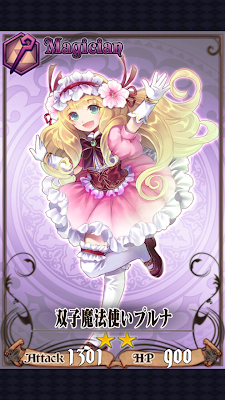 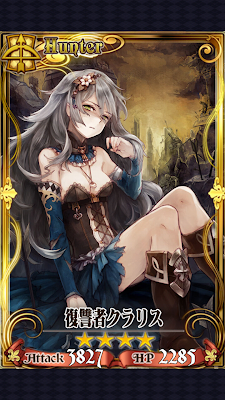 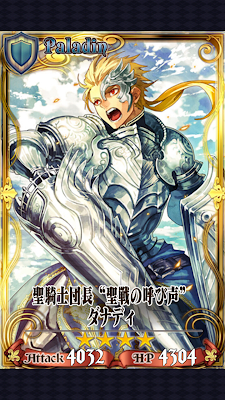 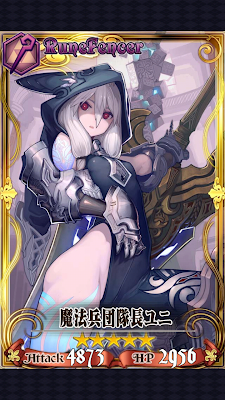 So a little bit on how to start out. For those who've played PaD before, you should know how players may prefer to redo the starting stages so that you can get a good roll off your first free cash gacha roll. It's the same for Chain Chronicle as well. But before I go into that, let's talk about the gacha, the cards and their rarity.

The cards are ranked from 1* to 5*, weakest to strongest. 3* are rare (R), 4* are super rare (SR), 5* are SSR. The * difference is a direct indicator to the cards' stats, their maximum level and their abilities. For normal gacha, you'll typically get 1* to 2* cards, and 3* is extremely rare. For cash gacha, it will cost you 5 magic stones. The lowest rarity for cash gacha is 3*. SR and SSR rumored to be within single digit percent chance, so SRs are okay to start things out. 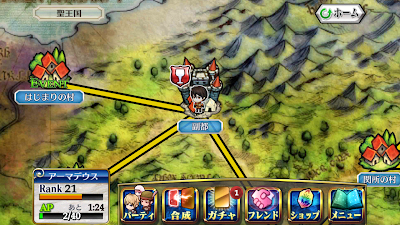 Here's the main UI of the game: map where you grind and quest, an indicator showing your rank and stamina, and the bottom row which depicts the buttons for <Party>, <Combine> (levelling up and selling cards), <Gacha>, <Friend>, <Shop> and <Menu>.

Towns with a wine-glass sign is where the bar is located, and the bar unlocks new cash gacha with new SR and SSR characters in them. 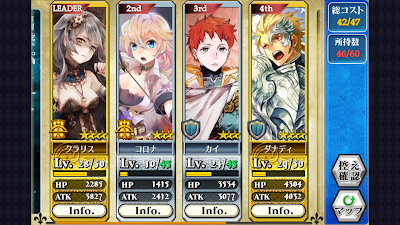 Going into the party option, you can set up your party of 4 there. The leader is what your friends and random strangers will see when they choose you to join their party. The party also includes 2 substitutes, who will replace your dead team mates. The total team cost is shown on the top right, and beneath it is the amount of cards you own and the total space you have.

There are four classes of character cards. Fighters (red), knights (blue), archers (yellow), mages (purple) and healer (green). They counter each other in a rock scis paper fashion in this manner: red -> red -> yellow/purple -> red, so build your team accordingly. Healers are neutral iirc. Also, try not to spread out the classes too much for your party so as not to dilute the type of mana obtained during the battle, which you'll need for the characters' skils. 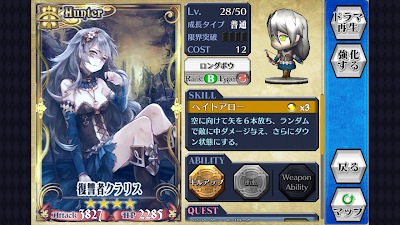 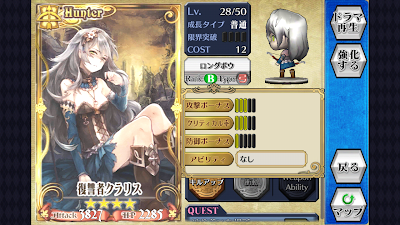 Pressing on the info button brings up the character screen. Top shows the level, growth type, limit break and cost. Limit break is a feature where if you feed the character the exact same character card, you get to break past the max level and increase the stats. Next is the weapon, where its rank can be upgraded by equipping the character with better weapon. Pressing the weapon box shows the weapon's stats. 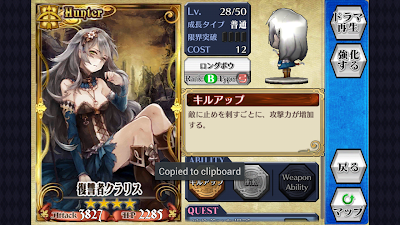 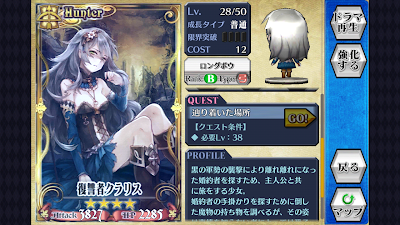 Skill is the active skill which you get to use in battle, and on the top right shows the mana cost. Ability is shown beneath it, gold is ability that is unlocked and silver is ability that is not. Pressing on an unlocked ability brings up a popup where you can see what it does exactly. Abilities that are locked typically will require some quests to do, so you can see the quest available for your character. Otherwise, some characters will provide you quest where you can earn a magic stone upon completion. 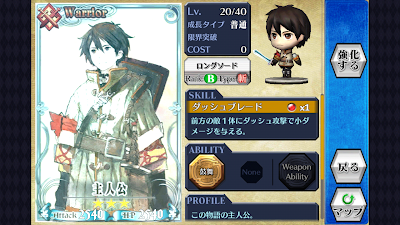 MC's a pretty shitty 3*, but he has 0 cost, so he's pretty damn awesome early game just because of that. 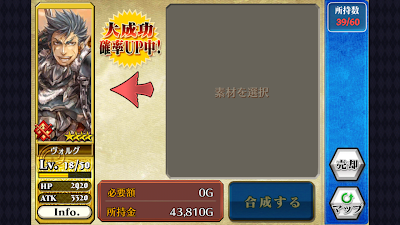 Combine option is where you either level up your cards or sell them. Slot your character card to the left and tributes to the right. Tributes can include other character cards, arcana cards (specially for levelling up cards), weapon cards and weapon upgrade cards. The first hexagon button on the bottom right is the sell option, and after pressing that you'll get to select cards to sell for cash and etc. 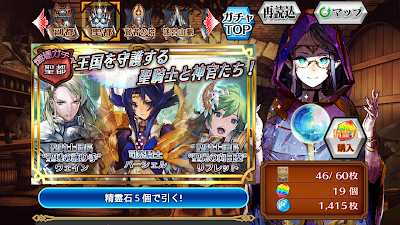 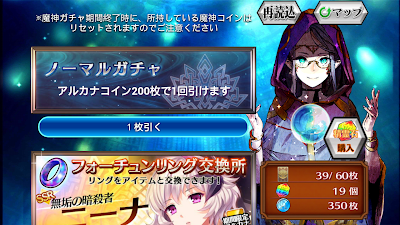 Cash gacha on top, normal gacha on bottom. Notice you can select towns for different gacha sets for the cash gacha. For normal gacha, it does not matter. For cash, you'll see the SSRs for the town on the poster. You'll require arcana coins for normal gacha, and you can earn them via friend assists, friend usage and missions. 200 coins per roll. 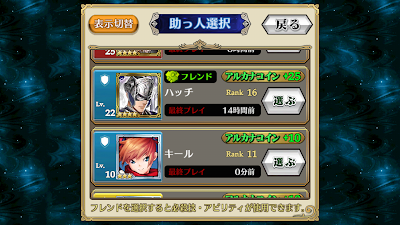 You get to select friends or strangers for each battle. Friends net you 25 arcana coins per use, while strangers net you 10. At the end of the battle, you get to choose if you wanna apply to be a stranger's friend (if you choose to use them). The same applies for people who uses your character as well. 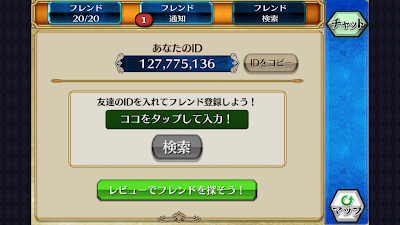 Here's what you see when you press the <Friend> button. Sort of. The first tab shows your friends, second shows strangers application, and last tab shows your ID and allows you to search for a particular friend using his ID. Here's the last tab and my ID. Feel free to add me if you want, though I may be running out of space soon. 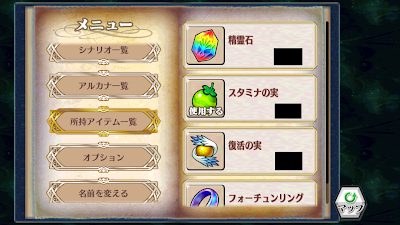 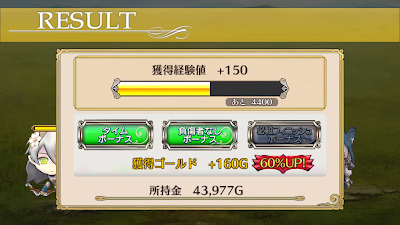 Briefly touching on the battles, you get gold bonuses for fulfilling some criteria. The first is to clear it within a short amount of time. Second is not to have any party member dead (aka, no subs appear). Last is to clear the stage by using a special as the finishing blow.

So how to grind your first roll like retards to start off decently with SR or SSR? Well, two options. One is to either play the game till you do the free cash roll. If unsatisfactory, uninstall the app and install again (not sure if this works for iOS). The other is to prepare two devices with Chain Chronicle. You can simply use Bluestack + apk for that. Clear your roll on your main cellphone/tablet. If the roll turns out unsatisfactory, head to the <Menu> button and select the backup option. 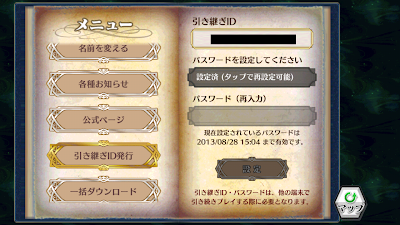 It shows you your account transfer ID. Set a password and retype it again in the two boxes and submit it. Log out of the game on your cellphone. 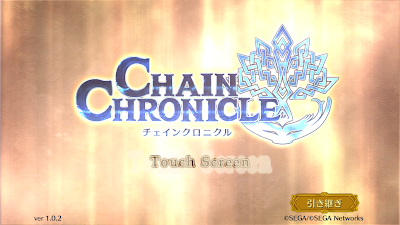 Head to the second device and boot up the game. Bottom right corner, transfer your account over. Then just reboot your main device and voila, account deleted. Tbh, I wish PaD will provide a service like this so that I can finally bid my iTouch goodbye. 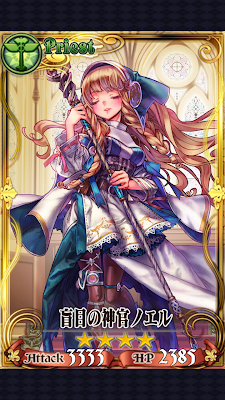 Outside of the SSR, this blind healer is probably the best start you can get with a SR from the first town gacha. Heals far and heals hard with her ability.

Last tips, here's what I feel a few 1* and 2* characters that are worth keeping in the beginning (esp if you're not planning to use cash). They are easy to limit break, so do it whenever you have the chance to. 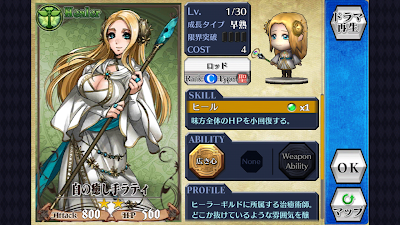 Probably one of the two best healer for 1* and 2*. She has one of the ability of the blind healer, which is to increase her heal area. 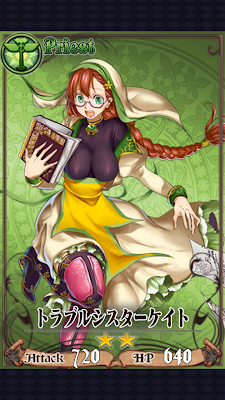 The other half-counterpart to the blind healer. She heals more, but has comparatively smaller heal area compared to the first. Pick your poison. (Personally, I feel she's the better option since she is normal growth compared to the healer above who's early growth. She'll ultimately do more heal in the end.) 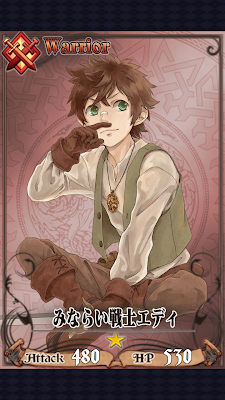 He has three quests in his name, though not sure how good they are. At level twenty, his ability increases his attack when he's below 1/3 health. Kinda ok to use. 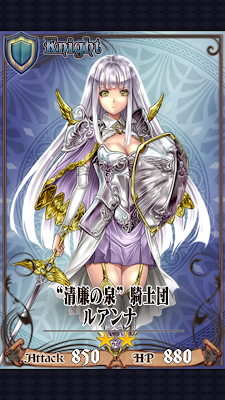 Probably the strongest 2* knight. While she has no ability, she heals off a chunk of her HP and eliminates her poison status at the same time, all for just the cost of a single blue mana. Pretty much the top tanking choice for a 2* knight.

That's all from me. It's brief, but I don't really have time to go through everything. Feel free to add me if you want. Hopefully, more people will get to know the existence of this wonderful app game.
Posted by zgmfx09a at 1:30 AM