I will probably be releasing at this pace or slower, at least for now (since it's the summer), as it is pretty difficult to translate portions of this (I have literally no idea what they're saying sometimes; lots of archaic and extremely formal language, so I have to look up everything in a dictionary and infer some parts of it). I'm beginning to get used to the language though, as I'm memorizing a lot of the archaic words and unusual usages as I go.

I'll be in China starting tomorrow, and will come back in three weeks. I probably won't do much translation there, so it'll be a while before the next update. Apologies in advance for the wait!
*******************

To the north was the Republic of Zepilm, where humans and Majins live equally. [TL Note: The author seems to use 魔人 (majin) and 魔 (ma, usually mean demons or devils) interchangably for the race with superior magic powers, so I'm just going to stick with Majins. Especially since there's also 魔物 (mamono), which in this case refers to demons.]

To the south was the Gran Marsenal Empire, where Majins are the rulers.

“Prince Mahiro, where are you at?”

Stuck between the two powerful nations, in a place called the Middle Plains, were many small nations, and of these a country smaller than a city existed. It was a country that will create tremors in the entire continent in the future: Mismarca. Though, right now, it was only a small country where people lived peacefully.

This was the royal castle. The girl who had been calling for the Prince was Pariel Karyzel, an eighteen year old novice Imperial Guard.

She was drenched in sweat after running scatteredly throughout the city, and her throat was parched from shouting so much. Each time this happened, she was not sure where the prince disappeared off to.

Gradually, Pariel was overcome by a great anger.

“Come out here you idiot prince!”

Her loud voice reverberated throughout the wide corridor. Though she looked expectantly at the doors that opened occasionally, those who appeared were only unrelated soldiers and officials.

Pariel once again took in a great breath of air.

The handsome, black-haired youth that suddenly appeared out of nowhere was the next successor to the crown of the Kingdom of Mismarca, Mahiro Yukelsnike Edenfalt. He was 15 years old.

“Where did you come from!? If you could hear me from the start then answer me!”

“Geez, you shouted with all your might in such a misleading and mature voice, what are you trying to do? I am the prince, after all.”

“Err, I think there's something wrong with that...”

“Wait a second, you immature kid.”

“You say some really horrible things from time to time, don't you...”

The prince then touched her chest. Pariel couldn't keep her coherence as her chest was being fondled.

“That's why I called you childish.”

“Hey, listen, you. Do you know what it means to hit a member of the royalty? In other countries, it is an act of treason, and means capital punishment, you know? That means the penalty will be extreme. You realize that it would be different from here, right...?”

Well, in the first place, there wouldn't be such a weird prince in those other countries; disregarding this, Pariel only walked oddly behind the prince, her head hanging down, and repeatedly nodded her head while following Mahiro.

“Not being able to control yourself, isn't that a cliché used by criminals?”

“N-no, but, um, this, if prince suddenly touches me like that, what am I supposed to think...”

“That, see. Aren't I the prince? Ahahaha. Want to eat some frisk?” [TL Note: Frisks are a popular brand of mints in Japan.]

Only his apperance. It was really only his appearance. If he kept quiet and looked prim, he would fit quite nicely together with a white stallion, but to the maids, soldiers and officials in and out of the palace grounds, the prince's idiocy and eccentricity was well-known.

Mahiro turned around while putting away a rectangular tablet into his pockets.

“Er, ermm, right, the king wanted you to have an audience with him.”

“Eh? Father? Then it's all right if I don't go. It's just going to be another of his lectures and speeches.”

Pariel couldn't help but to wonder what kind of an upbringing the Prince had that caused him to become so weird.

“Even if you say that...isn't your father the king?”

“But, really, my father becomes really scary when he's angry.”

“No. That's the same in any household. It's not just in the royal family.”

“Ah, I still don't feel like going. Maybe I'll just pretend that I didn't hear of it. Yan-pi-kon-pi.”

“What country's language is that? So, we're going now. If not, I'm going to get scolded; now get moving!”

Pariel pushed the prince's back as she walked.

“Isn't it okay to get scolded once in a while? In our long lives, there will be such days. We'll just do better the next day!”

“Do you want me to repeat the same words you just said to you!?”

“I'm the same, so keep walking. Lift up your head normally! Your crown is tilted, too!”

“That's because you hit me...ow, ow! My neck! I got a whiplash...!” [TL Note: Whiplash is a neck injury caused by sudden jerking movements of the head. The text used this term, so I just kept it.”]

They arrived at the audience hall. The king sat in his throne at the innermost part of the chamber, and before him were gathered all the important people who supported the country.

Despite saying that he was a timid person a while ago, Mahiro remained quite composed as he advanced along the red carpet that stretched across the center of the hall. Pariel parted from the prince, and stood close to the entrance of the audience chamber. She became a novice and started serving in this castle one year ago. This was not the first time that she found herself in such an occasion, but she still could not get used to it.

The air everyone gave off felt somehow heavy. The hair on her skin stood on edge.

The king, sitting on the golden throne, said solemnly in a deep, grave voice, and with just that his voice reverberated throughout the audience hall. He was a member of the race called Majins.

“There were many unpleasant occurences. So, what do you require of me, Father?”

“Only one thing. There are some here who may know of this, but listen carefully. Last night, the Empire...Gran Marsenal resumed its invasion.”

Hearing this, the assembled vassals immediately broke into a commotion.

The principle of the Majin's rule was to use their overwhelming fighting strength to enslave humans, and therefore gain laborers. A mere twenty years after it was founded, the Empire had already conquered the southern half of the continent, quickly establishing its splendor and prosperity, becoming a nation where Majins reigned supreme.

Now, in order to protect the vast amounts of new territories from invasion by demons, the Empire had spread its army and supply lines wide, so it was thought that a second, large-scale invasion would not occur, but...

Upon hearing the king's thundering cry, Pariel, and everyone else, managed to calm down. A sudden, overwhelming silence struck the ears of everyone present.

“I understand your anxieties. However, if we were to be shaken by this, then the people will also be shaken by this. What is there for us to gain if we give into our fears? I will depart now for the Republic in order to discuss with the other members of the Anti-Imperial Alliance our future movements. Therefore...”

The king paused before speaking again.

“I will leave Mahiro in charge as acting ruler. I entrust the country to you, Mahiro.”

The hall became noisy as uneasy voices arose again. Mahiro met his father's gaze with some anger . It was an unfavorable situation.

“Do not be anxious. Who said that you will be fighting a war? Even though I said invasion, the Empire still has yet to make a move. In one month, or at the soonest in half a month, the Imperial main forces will start to deploy, that's the situation. I will return in five days, or a week at the latest. I only need you to take over for me in that time period.”

At the king's suddenly severe voice, the prince drew his body back.

“Right now it is still fine. But in the future, I fear that the continent will become a world filled with wars and disturbances. At that time, I will not be here. So, if that time comes, you will become responsible for the well-being of this country.”

“I am aware of your reputation inside and outside of the country. But, that should not concern you. The problem is that you are not prepared. In other words, you must learn to control your playfulness. If you change yourself, then soon your scandalous name will change as well. I trust that you are aware of this.”

The king shook the crown sitting on his head slightly. 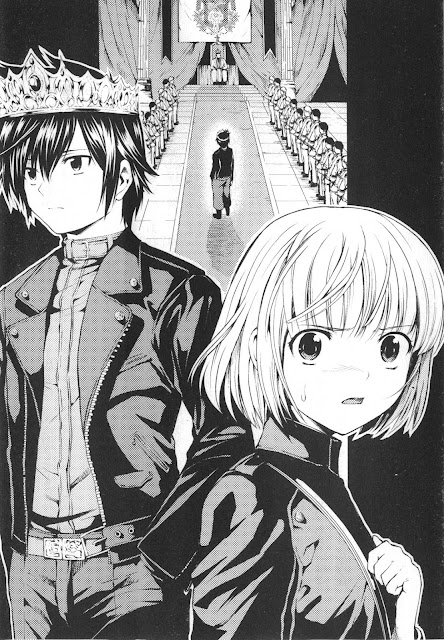 “No, first, you must understand this. A king can never earn the trust of his people by acting like a clown. To put it otherwise, it is the duty of the king to earn the people's trust. So, given this opportunity, this is something that I would like to teach you.”

Mahiro was overwhelmed by the king's powerful gaze. Silence...there was only silence. After looking at his son's reaction, the king lowered his gaze and sighed deeply.

“Only for a few days will you be taking up responsibility for this country. However, if during this time you clear off your name and perform well, and earn even a little bit of trust from the people...perhaps, when I return, I will remove the seal placed on your powers.”

Mahiro, who had been looking downwards, suddenly raised his head in surprise.

“That...do you really mean that, Father?”

“Your powers as a Majin are far too strong. Therefore, when you were young, your powers were sealed. But if you are able to become the king...then there should be no problems.”

Since the king was a Majin, Mahiro obviously was one also. But what was said in the conversation just now was the first time that Pariel had heard of these things. Sealing Mahiro's power...it was probably normal. A powerful magical power, probably enough to rival court magicians or even the king himself, a destructive power, dwelled inside of Mahiro; it was dangerous.

“Then I will show that I am able to govern this country in your stead, Father.”

That proudly straightened back. That voice without any hints of hesitation.

Perhaps that was the real Mahiro.

That was the first time that Pariel saw that side of the prince, ever since she started attending to him. It was probably the same for everyone else present in that place as well.