I'm back~ Free at last T^T
Here's a short one to start this volume off~ Shiika's past!~ 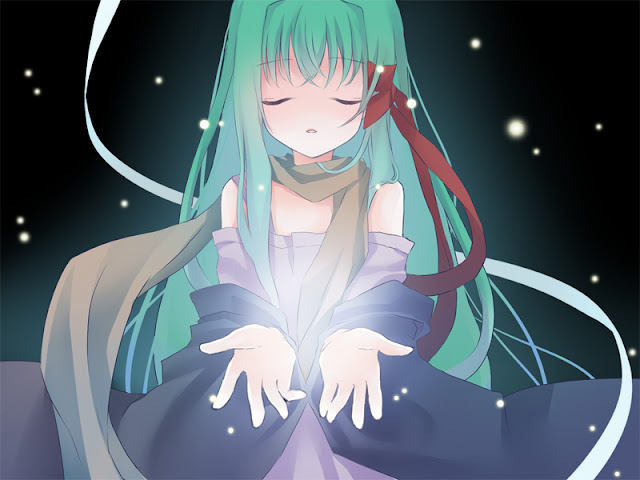 
From an unknown far distance came waves of irregular clattering sound. Even though the time was near dusk, the sound of construction could still be heard everywhere within the rapidly-developing Ouka City.

The Ouka City’s residents were already accustomed to this kind of noisy daily life; even Shiika, who’s in the final winter of her sixth grade, was feeling the same. While hearing the noise that came from somewhere, Shiika continued to walk on her way home from school --- a view like this, didn’t appear only during the freezing Decembers, it had never changed ever since she entered elementary school.

Shiika breathed out a cloud of white mist, and deftly bypassed the corner where a red mailbox was standing.

Due to the sudden increase of residents in this area in the past few weeks, the numbers of buildings had naturally increased along. As a result, the path Shiika took to school had also become more tortuous and winding.

Shiika involuntarily shrank her neck, and stopped in her tracks. The long hair that she emulated after her bigger sister, and her beloved white scarf that she begged her dad to buy, were being blown into a mess by the cold wind. Even her book bag couldn’t escape the ravage of the gale, and the books and supplies that were inside the book bag were being rocked back and forth, making “Kacha Kacha” noises.

After the gale had passed, in front of Shiika, who was preparing to take a step forward, appeared a person.

No. Shiika at first didn’t realize that the figure that was bathing in the reddening ray of the sunset in front of her was a person.

But, it was indeed a person. And that person was a woman wearing a deep red over-knee overcoat, while carrying a fine leather handbag. Her slightly smiling face looked very dignified, but at the same time, her meticulous smile made her look like an icy wooden doll. However, the thing that attracted Shiika the most, was a pair of round sunglasses that the woman was wearing.

The sunglasses that were reflecting the rays were no doubt facing Shiika’s direction.

Shiika at first thought that this woman was a ghost or some sort because she didn’t know when in time did this woman first appear, and not to mention her presence was very weak to a point that --- even if she suddenly vanished right now, Shiika wouldn’t even feel strange at all. Shiika was not afraid of her, but just couldn’t get her gaze off this woman.

The construction noise that had been continuing along unknowingly stopped.

“Hello, could you tell me your dream?”

Shiika was startled, before suddenly coming back to her senses. The sound that came flowing into her ears by the friction of air particles was no doubt real. In other words, the woman in front of her was not a ghost right?

After realizing that the other party was human, Shiika became even more afraid. Her mind suddenly collapsed into a mashed mess, completely forgetting the question the other party just asked.

On seeing the teenage girl’s restless look, the woman seemed to be interested as she continued to gaze at her.

Finally, Shiika calmed down before remembering what action she needs to take under this kind of situation, and turned her back facing the woman.

But, just at the instant when Shiika was about to run away, the woman’s voice stopped her in her tracks once again.

“You don’t have to be afraid.”

As if she was being seduced by the voice, Shiika slowly turned around facing the woman.

“I just wanted to ask you, that’s all. It seems like you have a rather delicious dream, yet you’re just staying in place, not doing anything at all.”

The woman smiled slightly as she lowered her head and gradually leaned towards Shiika. The pupils that were shining a brilliant glow behind her pairs of sunglasses captured Shiika’s heart, and drove away her fear.

Meanwhile, Shiika could feel her chest being filled by a tiny dream that would make her feel very happy whenever she thinks about it.

A dream that Shiika had always, always carefully treasured in the bottom of her heart.

The corner of the woman’s lip rose slightly, which deepened her smile. At the same time, atop her shoulder, a swallowtail with gorgeous colorful wings suddenly took flight.

Next chap we get to find out more about Shiika's family~ Shiika's onee-chan is pretty charming 2 u know? xD
Posted by Wing at 9:03 AM