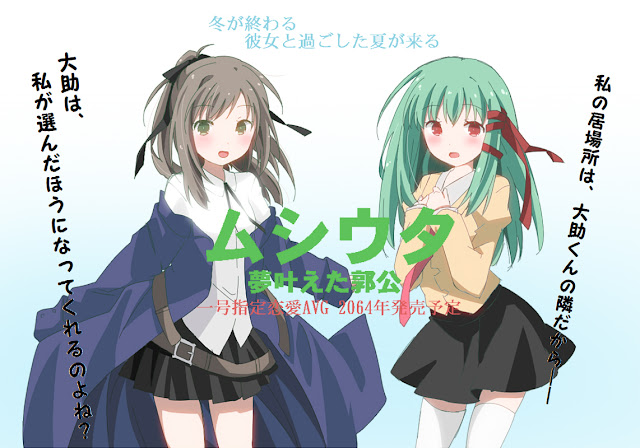 Awesome cross-dressing~ Another one of the April fool's joke. A romance AVG (this honestly looks like galgame to me be honest lol) of the level one ranked~

Ubuki’s vision was dyed crimson red by her blood.

Her head was injured from the attack; the goggles that she was wearing had de-fused from her after being smacked away, and turned into a piece of metal as it fell to the ground.

However, Ubuki still maintained a smile.

She emergency braked before accelerating instantaneously, narrowly dodging the mandible of a (Mushi) coming from behind. However, she was immediately surrounded by a large number of enemies again.

She could only do a sharp turn to dodge the incoming wave, but her leg was grazed by a (Mushi)’s sharp claw during the process.

Her entire field of vision was filled with Central Headquarters' (Mushi). In addition to the (Mushi) that had the ability to fly, Special type Mushitsuki, and the long-ranged attack squad had surrounded Ubuki completely.

The view of Higano City below her seemed very far away. If one to were to look up from the ground below, the battle between (Mushi) would probably look like a bunch of birds fighting.

Ubuki climbed higher in attitude, intending to breaking through the surrounding formation.

But a sudden gale which came from behind caused Ubuki’s wings to instantly become dull.

Taking advantage of this, the airborne squad’s (Mushi) immediately closed in and bit onto Ubuki’s shoulder. Sharp fangs dug deep into her skin, causing brain piercing pain to ache against her.

The (Mushi) then swung its head, throwing Ubuki back into the air. Other (Mushi) immediately charged towards at the falling Ubuki at once.

Ubuki squeezed out energy to rapidly beat her wings, and narrowly grazed by their attacks in a nick of time.

Ubuki continued to increase her speed, and charged through their encircling net. The airborne squad immediately chased after her.

How long has it been since she parted with Shiika and Yuu? It felt like only a few minutes had passed, but it also felt like few hours had passed as well.

The freezing wind blew against her eyes that had lost the protection of the goggles. Blood began to flow into her eyes; one of her eyes was almost close to blind. The right shoulder that was bitten by (Mushi) was losing strength; the bone was probably broken within. And she couldn’t even feel her injured left leg anymore. The streaming blood had almost dyed the entirety of her clothing in red.

Even so, the smile on Ubuki’s face did not disappear.

“Not enough! Your guys’ attacks… are completely useless……!”

Ubuki continued to provoke while gliding. The airborne squad attacked at once, but Ubuki still managed to dodge them one by one with her severely injured body.

“None of you… can take anything from… me anymore---Uagh!“

The smiling Ubuki was knocked away flying.

It seemed like the new reinforcements had arrived, the (Mushi) closing in on the side used its body to tackle Ubuki.

Ubuki’s body lost its balance in midair, which gave the chance for two other (Mushi) to tackle her from both sides. The disgusting sound of bone shattering could be heard coming from somewhere near her chest; the eye-widened Ubuki then coughed out a mouthful of blood.

The blood scattered before Ubuki as her consciousness became hazy; as she fell to the ground.

Her limbs refused to make any response at all, not even one finger would respond to her. Through her blurred vision, she could see the enemy army that was flying after her falling self.

She was already broken beyond her limits, due to the Physical fatigue combined with her severe wounds— in addition to over using her (Mushi)'s ability. The past memories began to flash through the mind of Ubuki, who was falling straight down.

The sound of the Aoharima Island’s tidal waves was echoing against Ubuki’s ears.

As well as the soft and comfortable sea breeze. Gazing from Ubuki’s VIP seat, one would be able to overlook the whole island’s scenery from there. The trees that were swaying from the breeze, the fishing boats that were floating by the coast, the joyful islanders, and the dismal clinic, every single one of them.

Unknowingly, a young man appeared standing next to Ubuki.

The young man also replied with a smile, but that smile seemed to be filled with fatigue, causing it to appear very lonesome.

Suddenly, the figure of the young man was enveloped by darkness.

Aside from the young man, everything on the island was engulfed by the dark flame.

Ubuki immediately reached her arms out.

But no matter how hard she called, she couldn’t hear any sound, nothing at all.

In the end, the whole space was eroded by darkness. The only things she could see were her hands. Even though she tried to grab onto something, latch onto something, she couldn’t see anything.

The hands that were unable to take back anything were clenched tightly.

Just before her consciousness was enveloped by the darkness, the corner of Ubuki’s lip moved slightly upwards.

At the end of the darkness, the horizon of the far distant, she could see something tiny glowing.

It was a small light.

The light was very weak as if it would burn out any second.

An image then suddenly flashed through her mind.

The image of two teenage girls reaching their hands towards her ---

Hearing the roaring sound of wind blowing by her ears, her fingertip trembled slightly.

In front of her opened palms, the (Mushi) army could be seen.

Ubuki twisted her body as she spread her two pairs of wings, and beat them forcefully.

The approaching ground came to a halt in front Ubuki, who made an emergency stop.

And then, Ubuki landed onto the ground with her four limbs --- the landing point seemed to be a vast and open land, somewhere like a park.

Ubuki then raised her head.

She was probably showing horrible smile now right? Ubuki knew… the instant when those white-coated figures saw her escape the fate of her falling to her death in a nick of time, every single one of them were putting up an expression of disbelief.

Ubuki used her two legs and two hands to leap, and glided.

“This is just the start of everything! Next, I’m going to get revenge against that woman! And then go back to island---“

Flying close to the ground, Ubuki suddenly saw a group of figures standing in the distance ahead.

There were a few people standing at the plaza.

Through her blood-stained eyes, Ubuki caught the glimpse of the figure standing at the very front.

--- In the hand of that woman showing a bright smile, was a gun.

After a gunshot echoed, Ubuki realized that she had been shot down.


That's all for this week I guess, unless the editors can edit the following the chapters which I translated already. Well, think of this as a happy b-day present from me ^^ (yesterday 4/6 was my bday~). I'll try to get the following chapters out as soon as possible!~