In the shopping district of Higano City’s suburbs, morning started early in the day.

Perhaps it was due to the fact that their primary customers were people traveling between cities— only very few stores unopened with their shutters closed, despite it being very early in the morning. Not just the convenience stores, even the shoe shop and a store with a drape which read "pawn" were open for customers as well.

A teenage girl in a school uniform could be seen standing in front of the pawn shop’s door. It seemed that she was on her way to school before she suddenly halted as she passed by the shop. After silently staring at an object in the showcase for a while, she stepped into the pawn shop without any hesitation.

It wasn't long before the teenage girl came out while holding something in her hand. It appeared to be a necklace with a golden ring attached to its end. Even though it was purchased on impulse, her decisiveness could still be regarded as impressive. The teenage girl, who had a complete poker face just minutes prior, now wore a big smile filled with satisfaction.

Someone else, most likely a friend of hers, called out the teenage girl holding the necklace. The teenage girl then repressed her smile and walked away along Higano City's sidewalks with her friend.

Gazing at the fading silhouette of the unaffiliated teenage girls as they walked away, Ogata Akatsuki turned around upon hearing someone call out his name.

A teenage boy ran up next to Akatsuki, who was standing at the exit of the shopping district.

It was a teenage boy of a robust build, with quite a big bag on his shoulder. He wore the same uniform as Akatsuki, which belong to a high school in Ouka City. Akatatsuki was also carrying a bag on his back.

“Yes, but they are all uncertain…”

(Kabuto) replied in a calm tone, and sighed. His face and his tone both felt somehow mechanical. And even at such a time, his tie was still neatly done, suggesting an overly-strict characteristic of his, which was quite different from Akatsuki.

“I’ve got bad news, horrible news, and nightmares. Which one would you like to start with?”

Tentatively, he seemed to be trying to give Akatsuki a chance to make a choice. Even though it hadn't been long since Akatsuki joined the combat squad of the East Central Division, Akatsuki felt that he got along with him very well.

Due to the unusual actions of the Central Headquarters recently, Akatsuki and (Kabuto) were deployed to Higano city by branch director assistant Ishimaki. If it was internal strife only within the Central Headquarters itself, they would just have ignored the issue and left it alone. However, the turmoil stretched all the way from Akamaki City to Higano City, and was even gradually approaching Ouka City. The hospital which Haji Senri had been visiting on a regular basis was also in Ouka City. The Aim of this investigative mission—which was to prevent Ouka City from falling into critical situations; exactly matched Akatsuki's own desires.

“Well, let’s start with the one not so desperate then. Give me some time to get prepared.”

“Then I’m starting with the bad news. It is said that an insurgency has occurred in the Central Headquarters.”

“An insurgency? Who on earth would…”

“I obtained this information by great efforts, from an old friend of mine. However, I still haven’t obtained the details yet. Hence, I can’t affirm whether the number of rebels was one or three.”

“That kind of thing… Why not just contact the Central Headquarters to confirm it?”

"I think you have a better chance to see me going to school naked rather than expecting those people to release authentic information. Besides if the intelligence was that easy to fetch, then we wouldn't need to be working secretly like this these days."

Thinking it over again, Akatsuki had to agree with that. Maybe it was due to the fact that Akatsuki had little interest in the affairs of the SEPB— ever since his time in the South-East Division; that he didn't know very much about these kinds of things.

“So that was the bad news?”

“Both (Kasuo), who has been in combat with the rebels, and somehow even (C) of the intelligence Squad, sustained injuries during the insurrection. Both are Mushitsuki ranked above level three... but I haven't managed to get in contact with either of them yet. I knew both of them before, and was expecting to get some intelligence from them.” 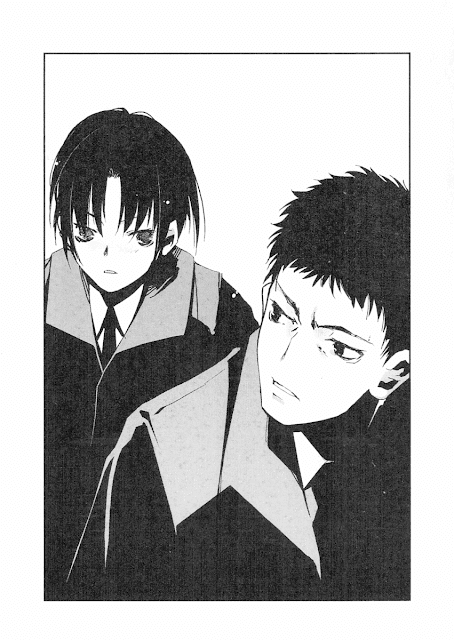 “And here comes the horrible news. The Central Headquarters seems to be gathering almost all members of their combat squad to the borderline of Higano City and Ouka City. What’s more, they’ve issued the command for the highest state of alert. We’re also in trouble now. Our retreating routes have now all been cut off. If we did anything unusual and caught their attention, those guys would be attacking us without any hesitation.

"All of their combat squad members? Are they planning to wage war?!”

“Even the East Central Division as well?! But we haven’t heard of anything like that!!”

(Kabuto) continued with his flat tone.

“But in regards to what the CD was about Or who’s carrying it, I haven’t got any details about those yet. Anyway, situations have become troublesome. Now, even for us, the way back to Ouka City has become arduous.”

“It’s fine. We should head back to Ouka City as soon as possible.”

Akatsuki stared towards the direction of Ouka City with a determined look on his face.

“Well, maybe you’re right. Both deputy branch director and (Kakkou) have gone to the Central Headquarters in Akamaki City for several days already. So right now, there isn’t even one high ranked member in Ouka City. I don’t know what (Kakkou) has in mind, but I think he should probably be coming back from such an incident.”

On hearing the name of (Kakkou), Akatsuki clenched his fists.

Akatsuki was once a member of (Mushibane) for the sake of protecting their leader, Tachibana Rina. However, his wish was dispatched by (Kakkou), along with Rina's life.

Akatsuki joined the East Central Decision for two purposes. One was to protect Haji Senri, and the other, was to defeat (Kakkou), in retribution for Rina.

To Akatsuki, the insurrection was a rare chance. If he were to be left alone with (Kakkou) when the battle occurs... He would not hesitate even for a bit.

“And the last piece of news I have.”

(Kabuto) faced Akatsuki who had reverted his expression back to normal.

“You said it was a nightmare, right? What do you mean by that?”

“If what I’ve heard is true… it would be that…last night, one of the members accompanying the deputy branch director, (Nene), said to have sighted---”

“(Fuyuhotaru), in the surrounding areas.”

(Fuyuhotaru) --- She was someone who almost effaced SEPB only by the power of herself, and was also in the center of a number of battles which involved even (Mushibane) several months ago. Moreover, she was now the only Mushitsuki who had awakened from being a Fallen.

“It somehow feels weird if we suppose that she is the rebel…But that explains why the efforts of (Kasuou) and others who tried to stop them all ended up in vain. Though, there’s a high chance that it was only (Nene) mistaking someone else as (Fuyuhotaru).”

“Didn’t that person called (Nene) keep track of who she saw?”

“Well… No. It seemed like she was arrested by the police shortly after that, and taken in for questions.”

“Questioned by the police? What was that all about…?”

“I don’t have the details about that either but…How should I put this…She’s, uhh, kind of unique.”

(Kabuto) shook his head with frustration as he started walking towards Ouka City.

“Anyway the only certain thing now is that the border of Higano City and Ouka city will probably erupt in fierce battles. The preference of the East Central Division, is to implement absolute defense. Before we receive any further directions from deputy branch director, do not attack no matter what occurs, and capturing the target is priority one.”

“Cause I’ve been in actual combat with her so I know…Well, forget about that. Anyway there’s only one thing we should do now. Find out what has happened, and capture the crux of that. As for the Central Headquarters, they will probably continue their policy of complete obliteration of their targets regardless of what happens … It seems like this will develop into guerrilla war.”

Finishing these words with his monotonous voice, (Kabuto) drew his eyes to Akatsuki. Akatsuki immediately nodded in respond.

Sorry that these chapters took so long, was busy wif exams and school.
Also this chapter was translated by a new Tl-in training(edited by the team), not sure if he going to stay wif us or not.

Enjoy the releasing spree!
Posted by Wing at 11:55 PM