Impression of episode 1 of Biblia Koshodou

Well, just a heads up, I've actually done the prologue of this as a teaser on BT, though none of the editors went through it. You can find it here if you're interested. Teh_ping did the epilogue. I was actually interested in doing this title, but since Teh_ping said he wants to do this, I guess I'll let the better person do it.

May contain some spoilers, so for those who does not want to be spoiled, turn back.

But enough of that. Let's talk about my impression of the show. I'll post the images found in vol 1 of the novel. 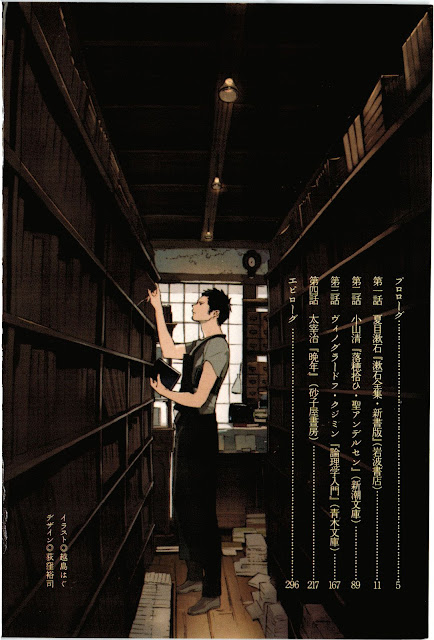 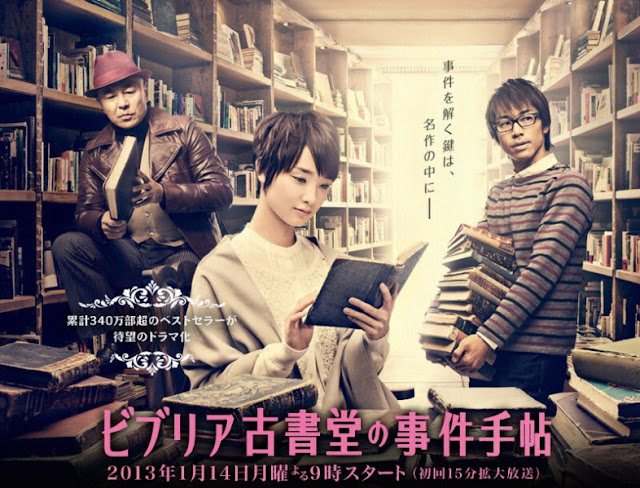 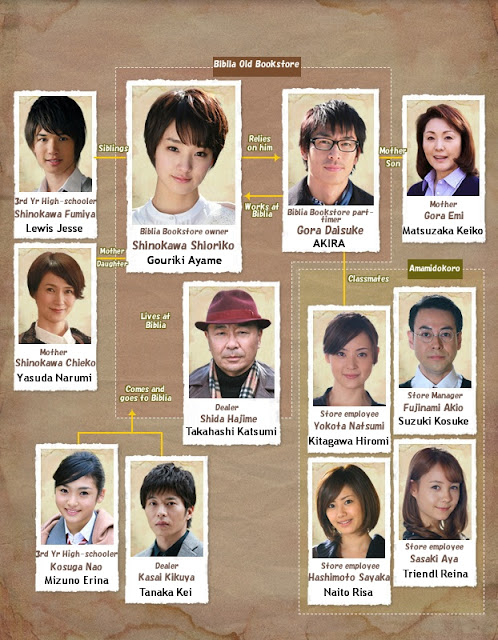 Okay, I'll start of with the casting first.

Gouriki Ayame as Shioriko. Urm, firstly, there's the long hair -> short hair thing. Really really irritating. I am someone who usually prefers shoulder length hair to long hair, but come on. And I don't know - I don't find her that pretty, but I guess this is just me nitpicking. She's supposed to be a ravishing beauty in the novel. With a pretty decent measurement on her chest. Oh well.

In the novels, Shioriko is supposed to be a soft-spoken lady who goes rattling on and on excitedly whenever she's talking about books. I don't really see that contrast in the drama. Sure, Gouriki's trying to put on the timid and yet elegant air, but it just doesn't match up to the novel version for me (and the short hair kind of kills it, really). I mean, long hair on a literature type of girl is almost like a stereotype  It really feels like I am watching two different person. Also, the drama Shioriko feels a little more...... assertive? I can't quite put my finger on it.

AKIRA as Daisuke. Oh god, it feels so wrong on so many levels, I don't even know where to start. To me, the only thing that they've got it right is his height. That's it.

From the novel's narration, my impression if Daisuke's sort of like a sheep in a wolf's clothing. He's tall and stout in size. Personality wise, he's mature and serious, but is unassuming despite his size unless it is required of him (this guy can really man up when it is needed from him). And oh, perfect vision, so no glasses.

Drama's Daisuke just feels goofy. There isn't any of the intimidating but assuring presence you'll come to expect from the Daisuke in the novel. I mean, that is probably what gets Shioriko's attention in the first place. But the drama's Daisuke just comes off as a dork or something. He doesn't look like someone you'll really want to depend on in times of needs. Drama's Daisuke looks like an out-of-place bookworm or something, and that's not who Daisuke is supposed to be. Daisuke's supposed to be the guy who looks like some all brawn and no brains guy, but is actually a dude who wants to read books but can't. There's supposed to be a contrast to his intimidating looks and his gentle personality. And I don't really see it here. Gah.

I mean, look at the novel's image. Daisuke can probably just snap your arms off like a twig if you fuck around with him or Shioriko. Does Daisuke from the drama looks like he can do that? Nope. He looks like the one on the receiving end of some NTR doujins instead. AKIRA may actually fit the role more if they remove the glasses or something. Why the damn glasses? Why?

Classmates of Daisuke came out of no where. Like really, they just appear all of the sudden. My memory is shit, but as far as I can remember, I can't even recall the novels touching on his classmates (I don't even think they actually exist). What's the damn point? Injecting some comedy or something? But Biblia don't need them.

Another weird casting is Shioriko's sibling. It's supposed to be a younger sister, damn it. Not some bishounen shit. Why the hell do you even need to change a detail like that? Eye-candy for the female audiences?

On the plus side, I kind of dig the casting for Hajime, probably because all Hajimes are some cool ass dudes or something (then again, Saito Hajime's cast in Kenshin movie is my only complain in the whole show). The portrayal feels pretty spot on. My impression of the novel's Hajime is probably more poorly dressed, but I don't really think it makes that much of a deal. I'll see how this plays out in episode 2.

Shioriko's mother, Chieko, actually looks pretty similar to each other, so that's quite impressive.

Now for the plot. They touched on the very first arc of the novel, which you can sort of see from the prologue if you read them. There's quite a lot of changes to the details though. For one, you can easily see from the prologue that Daisuke had already set his eyes on Shioriko even before the incident of the book. Shioriko's also supposed to be in hospital with an injury, though I won't touch any further than that. But damn, that's actually a really important setting in the novel, so why?

Next, from the cast shown, it actually looks like they'll just do volume 1 of the novel, but without one of the arcs inside. The characters in the first volume have really significant roles in the later volumes, so I just can't understand why they'll want to snipe off two pretty important characters for what looks like some run-of-the-mill comedy cast in your J-drama. Just...... why? And with one of the four arcs of volume 1 down in the very first episode (and probably one arc out of the four taken off, because I couldn't spot the important characters in the cast list), what are they going to do with the rest of the episodes? I am assuming a 13 episode length for this drama, so it doesn't look material from vol 1 to work on that will fit into the remaining 12 episodes or something. So what are they going to do? Touch on the classmates? Take in some chapters from vol 2 or 3? Good heavens. [Checked episode 3 briefly, looks like they did include it in.]

I don't know. I have pretty high hopes for the drama, but episode 1 has been pretty disappointing so far. I've heard Japan went nuts (in a bad way) over the casting for Shioriko, and I must say I understand the reason for that. It does not really look too promising, to be honest. I'll really hate it if the drama fails to match up to what the novels have to offer. I'll continue to stick around for the next feel episodes. I guess at least I have Hajime to look out for.
Posted by zgmfx09a at 12:33 AM