Aside from her and the cold measuring devices, there was only silence in the room.

Sitting on a metal chair, Touko who had her eyes closed, could even hear the beating of her own heart; thumping calmly against her chest in a set rhythm.

Touko began to recall the things that had just happened.

Although it was slightly suppressed, it was a smile that could make others feels her strong will. No matter how one looked at her, the teenage girl that was reflected in Touko’s eyes looked no different than a normal girl that could be found anywhere.

She slowly opened her eyes.

Accompanied by the sound of escaping air, the door that Touko fixed her gaze at, started to open.

The scorching currents blew away Touko's glasses and snapped her hair band, causing her long hair to flutter along with the storming heat.

However, Touko still remained motionless; her calm gaze stared straight at the tall slender teen that was about to enter the room.

It was a tall teen wearing a heavy coat, with a large amount of bandages wrapped around his face. The flame that was emanating from him caused the surrounding devices to melt almost instantly like chocolate. His overwhelming presence that was filled a sense of coercion was causing Touko to feel pain all over her body — as if needles were stabbed into her.

The teen --- Harukiyo looked at Touko, and revealed a grin. His low voice was so cold that it would send chills down people’s spine, and also sounded as if they were whispers that came directly from the abyss of hell. 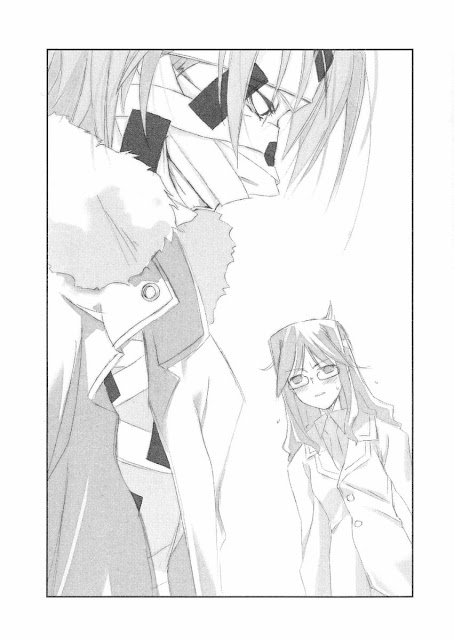 Touko then calmly replied with a smile:

“Your target was (Fuyuhotaru) from the start wasn’t it?... Faking the attack on Senri, as well as letting the new bullet train charge straight into Ouka City while under the (Mushibane)’s attack… Just so that the East Central Division would focus its forces near the border; and that way, the security here would be lessened.”

Harukiyo didn’t reply; he walked closer to Touko. The furious fire storm surrounded Touko as it continued to spread and burn.

“What happened to the Central Headquarters’ guard that was protecting here?”

“But I didn’t hear any sounds of fighting or impact.”

Harukiyo didn’t answer Touko’s question, just merely raised his hand coldly at Touko’s head. Aside from the soaring flame, everything that was in between Harukiyo and Touko was burned.

“She was transferred to the Central Headquarters already; even if it’s you, you can’t possibly do anything on your own about it easily right?”

“Goromaru Touko, the deputy branch-director of the East Central Division.”

However, the expected impact didn’t come. Touko raised her head, and exchanged glances with Harukiyo who was laughing pleasantly.

“You’re not gonna kill me?”

“Then could you please hurry up, I’m actually so scared right now that I might even pass out before that.”

“Well, since you made it less troublesome for me, I will at least listen to your last words.”

Harukiyo said with a calm tone, and showed a smile that could send chills down people’s spine.

--- made it less troublesome…

After she understood the teen’s remarks, Touko was no longer nervous. Although she tried to imitate Haji’s cool appearance, it seemed like she still had a long way to go.

Touko relaxed her shoulders, and showed her usual good-for-nothing smile.

“The reason why the (Mushibane) had gotten a hold of Senri’s Intel, as well as your appearance, and even your comrade Kanari Yoichi’s action, everything was just a decoy from the “Monitor”… Everything was planned for the sake of controlling Daisuke, Shiika, and Senri arbitrarily right?”

“This plan was intended to plunder everything they wanted all at once during the absence of Haji-senpai right? So using the (Mushibane) as an excuse, the Central Headquarters began to act and tried to wrap things up nicely before Senpai awakened. It was really amazing! I’m totally beat, ahaha.”

Even though Harukiyo didn’t make a sound, one could still tell that he was gazing straight at Touko with a slightly impressed expression.

“However, the ending is a bit sloppy! If I were the head-director, I would just let Daisuke charge straight into the headquarters directly. As for Shiika, I would burn this facility down, and force her to come out… Ahya, it seemed like I’m getting carried away, Ahaha…”

The flame in Harukiyo’s palm grew even stronger.

“After all, I’m an incompetent woman.”

“I couldn’t even save a normal girl like Shiika; I guess I could only do some trivial stuff from now on. Even the section chief in the Ministry of Internal Affairs has scolded me four times already, saying that I’m just taking the paychecks without doing any work, but ……”

Touko squeezed the hands that were placed on her knee.

"I want to save her… Even though I only know less than a handful of Mushitsuki; whenever I see them I feel that… Even if I am so useless… I still want to protect the dreams of those children… This desire of mine, was it too conceited? Even if I could only encourage them a bit, or even if it's mocked as self-satisfaction, it's fine. But if I don't do anything… I could never forgive myself…"

Touko raised her head to gaze at the teen, and said:

“I have already decided that I’m going to fight! So, if you’re going to spare my life, you guys will definitely not have it your way from this point on!”

The flame clump that the teenager raised up, suddenly emitted a brighter glow.

The flame that surrounded Touko, as well as the heat, suddenly all vanished without a trace.

Harukiyo grinned as he put down his arm. In front of the dumbfounded Touko, he turned around and walked toward the door with loud steps.

Harukiyo turned his head around and asked:

“You…Y-You just asked that before.”

Looking at Harukiyo who was showing a satisfied smile, Touko stuttered.

“The next time we meet, I will kill you. So try your hardest to cling onto life before then, Goromaru Touko.”

After seeing Touko’s flushed face, the teenager seemed to be very satisfied; he swayed his long coat as he walked away.

Just when Touko was intending to refute something, a familiar voice was heard.

“(Kakkou) reporting to the deputy branch-director.”

It was Daisuke’s voice; Touko hurriedly placed the headset that was hooked in front of her chest to her ear.

“Daisuke-san? Did you manage to protect (Senri)? What about (Shinpu)?”

“Touko-san, I’ll be taking a private action from now on.”

Daisuke was no longer using (Kakkou)’s tone, but rather Kusuriya Daisuke’s.

This incident was probably playing out according to someone’s plan.

In order to fulfill and protect their dream, Daisuke and the others would probably continue to live on right? As for Touko, she would be doing whatever she could to help them.

After cutting off the communication, Touko lifted her head to gaze at the charred ceiling.

She then closed her eyes.

Touko muttered to her supervisor that was not there as if she was vowing.

“If you don’t come back soon, I’ll take over Senpai’s place of belonging…!”

Touko’s mutter, that was filled with some mischievous intent, echoed back and forth through the empty room.


[Tsukkomi picture time]: ~.~ Rurou-san~ u did it again! can't you read the chapter and understand that Harukiyo blew her glasses off?! Yet u still drew her with glasses on~ =3=