The moment when she found out everything~

In the carriage that was enveloped by silence, Senri awakened.

Her head felt drowsy and she felt like she had a fever.

Why did my condition suddenly deteriorate like this?... It will only make Dai-kun and others worry…

Senri propped up her exhausted body, and immediately felt something was wrong.

For a moment, she thought that the new bullet train had arrived at the Ouka City, and everyone else had disembarked already. However, the seat that she touched was clearly the new bullet train’s seats; she could even hear the sound of train speeding on the tracks and its vibration.

She continued to reach her hands outwards; muttering:

A painful headache throbbed against her head. And because of this pain, her drowsy consciousness was awakened.

She then tried to recall the memories before she fell asleep.

After Senri’s condition worsened, the first ones that left her side were Iori and Akatsuki. The attitude they had when they parted seemed different than usual.

And then the next one that left was Azu, Senri could only remember a little up until that part; she said she was going to look for Iori.

Where did Daisuke go then? Before Senri lost consciousness, it seemed like something terrible had happened, yet she couldn’t remember any of it.

She reached her hand to touch the seat next to her, but it was empty.

She had said so to everyone before; to herself, everyone was like the ground… These words meant exactly that—As long as everyone was by her side, Senri could go anywhere she wanted; but in contrast, if they were not around her, Senri would immediately feel scared and worry where everyone had went.

If she were to act pessimistic, it would make everyone worry. If she were to put up any uneasy expression, it would increase others' burden— It would only give those kind-hearted people troubles.

Although her head was in extreme pain, Senri still stood up and tried to look for them.

Just at that instant.

Senri felt someone was sitting on the seat on the other side, thus she asked happily:

But the voice that responded was nothing like Daisuke’s voice; it was a beautiful voice.

It was a sweet female voice that could even paralyze one’s brain, and Senri didn’t know her.

Just then, all of the noise disappeared from within the carriage.

Senri, who relied on hearing and touching, could keenly feel the changes within the carriage as her entire body stiffened from nervousness. It felt as if the woman’s remark had brought this place into the dream world.

Senri tried to step back, but bumped into the armrest with her waist and fell onto the seat instead.

“Me? Umm… I guess (Oogui)? Since you guys always call me that. And as for Dioresutoi, it’s the thing that you guys named (Shinpu) after. Dioresutoi couldn’t endure the long mission anymore, and went insane from his appetite and delusions… … The “King of Mushitsuki”… There’s no need for such a thing!”

Senri frowned; she completely didn’t understand what this woman was talking about.

“Even though your dream has already been eroded by Dioresutoi before… it still seems quite delicious!” 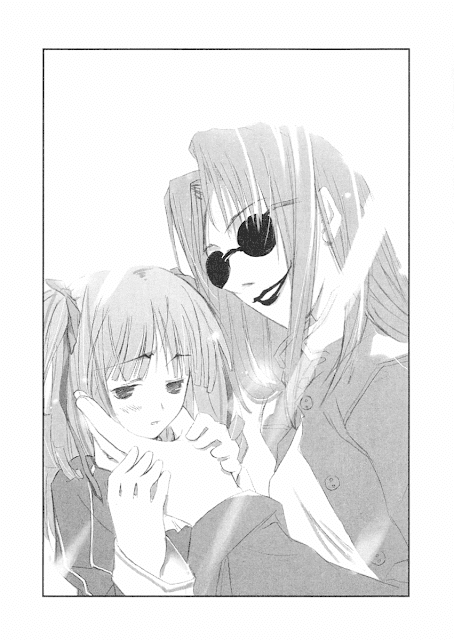 Just then, a soft fabric gently touched Senri’s cheeks. For some reason, Senri was sure that it was a glove-wearing hand.

With her hazy consciousness, Senri muttered to herself.

“Your (Mushi) is a very bright and warm flame … Many people pursue your flame, and gather around your side. Those Mushi that are lost in the darkness pursue your light … And those people frozen in the cold pursue your warmth… Yet you only use your flame to burn them down.”

Senri recalled the dream that she had a few years ago, a dream that was the exactly the same to the one she had recently.

The only scenery that Senri knew.

The biggest horror that Senri knew.

In the dream, Senri used her flame and burned everything.

(Oogui) used her fingertip to gently stroke her trembling lips.

“You actually knew about it already right? When your Onii-san was by your side, when your most precious people were by your side, your (Mushi) would deprive them of their dream ---“

A sense of fear was grabbing tightly onto Senri’s heart.

That’s right, what (Oogui) said was right --- When she was together with Onii-chan, Daisuke, Iori and others, she could feel that they were very close to herself. When they were by her side, she would feel extremely high in spirit.

But, that was all because she was devouring their dreams ---

“Your flame will only seduce them! The happier you smile, the warmer they will feel, which will make them want to pursue you… Then, you will encase them with your flame.”

“Your Onii-san is currently slumbering at Ouka City, and still hovering on the edge of life and death.”

“Oh look, even the (Mushi) army guarding the princess has also come to say goodbye!”

Something then touched Senri’s bewildered cheeks.

Although it had a hard sensation, it was surprisingly warm. Senri could hear a sound similar to low groan next to her ear.

“Seduced by the bright flame; a brave and kind boy… His dream was very delicious!”

The woman spoke in a pleasant tone.

The hard sensation moved from Senri’s cheeks onto her hands, and then gently caressed her trembling hands with its warmth as if it was trying to tell her something.

This action caused Senri to raise her head; she was familiar with this kind of rough-sensation touching her hands.

Iori, whenever he held Senri’s hands, would always tightly hold onto them.

Just then, the sensation that was touching Senri’s tiny hands gradually faded away.

“The boy name Endou Iori, died for you.”

The warmth that Senri was feeling from her palms before had also vanished as if it was an illusion.

Senri could feel something within her heart collapse.

Senri was still dumbfounded, and couldn’t even say a word.

Her heartbeat soared to the limit.

Iori and Azu both… died?

Unbelievable, there was no way she could believe it. If she were to believe, she would definitely fall apart.

Senri used her hands to cover up her ears while shaking her head desperately; tears began to overflow as well. In order to reject the woman’s voice, she intended to reject all the truth in front of her.

However, the woman’s voice pierced through the hands that was covering her ears and echoed against her eardrums.

Her chest was feeling throbbing pain one after another. Perhaps, because of the overwhelming agitation, she could feel her fragile body was screaming in pain.

“Hey, let me hear your dream!”

The woman’s sweet voice gradually flowed into the deepest part of Senri’s heart.

A dream that was formed for the sake of her big brother that was always worried over her.

“My dream is… to want Onii-chan to stop worrying over me, and pursue his own happiness…”

“Have you always deceived yourself with that?”

What the woman said was right.

Senri actually had another dream, a dream that she had been harboring ever since she was young. Yet she herself right now didn’t have the courage to say it; she was scared if she were to say her dream, everyone would leave her.

Senri could hear the sound of something burning up as the sensation of the woman's finger touching her cheeks drifted away. Senri’s cheeks, that were supposed to be wet in tears, had dried up from burning currents.

“Your dream was enjoyed by that picky eater Dioresutoi, it was truly wasteful. You know, I really wanted to have a taste as well, that burning delicious dream of yours…”

The woman distanced herself away from Senri.

“Dioresutoi’s child, go fulfill your dream! And then… next time, let me also enjoy your burning dream!”

After these words were let out, the sound of new bullet train speeding began to come back.

The mysterious dream-like atmosphere surrounding the area had also disappeared.

However, Senri was still shaking her head weakly.

Her heart was racing with a speed that she had never felt before; because it was jumping so violently, even Senri thought of fainting immediately from using up all her strength.

This thought emerged in Senri’s mind.

If she was someone that would only deprive the dreams of her big brother and precious people… If everyone was hurt because of her, then someone like her --- should just disappear.

She thought so from the bottom of her heart.

The burning hot currents instantly enveloped her the moment she muttered that.

She could clearly hear something sounding a joyful roar next to her.