For those who had been waiting, it's finally here! (Yes, i apologize that this took forever...)

Feel free to go to Volume one's Contents page and grab a copy of PDF. =)

Read on if you want to know about the series (There will be a teaser) and the changes we've done and etc. (There's a treat as well xD)

Well, before we start anything, let's give our thanks to the following staffs for their hard work on this rework and PDF.

Special Thanks to Akios, Cereal, and WingedMith for helping out with editing!

- Fixed grammar errors, increased readability and flow, (for those that we could find).
- Edited the content page's pictures & Synopsis.
- Added in a missing novel picture, (Srry about that, it was my bad for not remembering it in my chapter).
- Updated to the most recent terms, IE Kashu, Ishu, and Hishu.

Well now, for those of you who had never watched the anime/ read the manga/ or read the previous work, I'll be doing a short teaser/history for you i guess. (First time doing it, so don't expect it to be any good.)

Mushi Uta is probably one of those old legend Japanese light novel. It was first published almost at the same time as The Melancholy of Haruhi Suzumiya, which was around 2003. I hope that it just explained why the first volume's art isn't really that fancy, consider the fact that it was released so long ago. It might not be one of the best-selling, popular series, but it's really a good work. Currently, it has 13 main series volumes (00 + 1~12), and its spin-off, Mushi Uta Bug has total of 8 volumes. The 12th volume just got release not so long ago, in July i think it was. And dam, Sveroz had to spend 1 month to get his hands on one copy, due to all the out-of-stock issue lol.

Now enough with the history and crap, let's get onto the story itself. 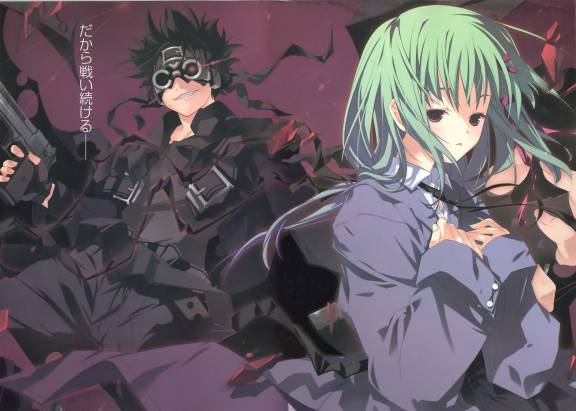 The story of Mushi Uta mainly focuses on teenagers fighting for their dreams. It's very emotional and realistic if you ask me. Let's put it this way, the dream that you had when you're little, whether it's i wanted to be a super hero when i grow up, i wanted to be a bride! (that's so rare these day >..>), i wanted to be a doctor to save more people, or i wanted to travel around the world. Imagine that those dreams that you held dear, was asked one day by these three unknown being. And you told them because you couldn't resist their charms. From that point onward, you became a Mushitsuki (Host) and was infested by your Mushi! Sound like a happy pokemon world? No, it doesn't work that way. Once your Mushi is killed, you'll become lifeless puppet/zombie, and to top of it, once you became a Mushitsuki, there would be people from the government to hunt you down. They are known as the Special Environmental Preservation Bureau, and guess what, they are Mushitsuki as well. So in order to survive, to live on, you have to fight, or become one of those SEPB's stray dogs. Shortly after, a bunch of stray Mushitsuki grouped together and formed a resistance organization, known as the (Mushibane), or Bug Wings, to fight against the SEPB. They seek freedom and a sanctuary for where they belong. And thus, the war rages on. These teenagers fought to protect their dream, fought to fulfill their dream, and because of that, they have to hurt each other. It's painful to watch/read you see? xD

Mushi Uta's first volume covers the story of three teenagers who shared the similar dream (or 4 if you look at it from Shiika's view =P).

- Want to find a place where he belongs, a place that needs him.

It's this teenager, Kakkou's only dream. Because of this dream and a promise he made to a girl, he slaughtered countless Mushitsuki's Mushi and trampled their dreams. The rumored strongest Mushitsuki, the tramp card of the SEPB, the Mushitsuki known as the "Demon", his alias is Kakkou.

- Want to find a place where she belongs, a place that allows her to stay.

That dream is her dearest wish, although she had to give up once four years ago, she has regained it back once again, and it was all because of an encounter she had with a teenage boy. She was afraid that her identify would scared the teenage boy she held so dear, afraid that he would reject her but at the same time, she didn't want to leave his side.

So ya, that's pretty much it, sorry for the lame teaser. =P

And for those who knew about Mushi uta through anime, i'll be listing the difference between the anime and light novel.

Differences in the light novel series :

-Shiika was having long hair four years ago, and yes that must be mentioned cuz you don't know how moe/kawaii she looks x).
- More in-depth explaining of Mushi type/classification.
- The appearance of Harukiyo and his gangs
- The foreshadowing of Senri during one of the conversation between Haji and Kakkou.
- The art piece that was in Shiika's hospital room near the end of the anime was actually not there. (It's a key item in Volume 3).
- (Oogui) did not appear in front of Kakkou near the end, she only appear for a moment near Shiika.
- and much more. don't remember all of them >.>

And finally, a treat for those who knew about Mushi Uta. Just found it a few days ago, took a long time trying to download it from niconicodouga. I do not own this

And yes, before you say anything, That's Shiika okay. Fuck author for saying she suits short hair, she obliviously looked WAY better in long hair. =)

Don't look down on Mushi uta because of it's arts from volume 1 to 3, Ruroo's skill has increased by ten folds in the volumes beyond xD!

And now, another teaser will be on its way. (probably within this week) About Mushi uta Bug =P stay tune!