Well, just a head up, there are some spoilers within this teaser/summary, both in regard to Mushi Uta Bug and Mushi Uta, so head back in case you don’t want to know. 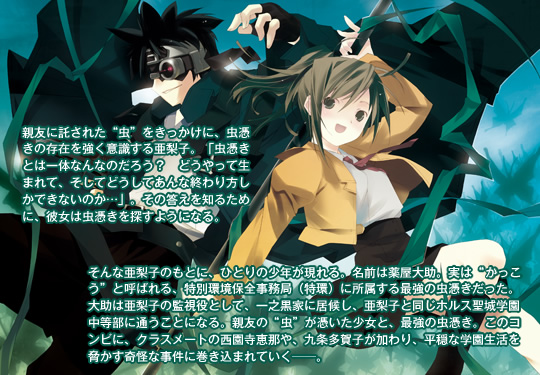 And so, let’s get to the history part of it a bit. For those of you that didn’t know, Mushi Uta Bug is a spin-off of Mushi Uta, sort of like a side story but actually has a *plot* itself. (Idk how other spin-off works but this one stands as a story itself actually). So far, it’s completed with 8 volumes. The ending of this spin-off is related to Mushi Uta main series. Both stories are interlinked, as in most of the characters that appeared in Mushi uta bug would appear later in the main series, Mushi Uta.

It’s sort of like their past stories ~ Oh, Mushi uta bug covers the four year time period when Shiika was turned into a Fallen. It’s written in short story style, as in few chapters combined together will make a volume. [Very similar to most of light novels nowadays consisted of 4 big chapters?]


Now then, the story begins with a teenage girl’s intense yet simple wish.

That’s the teenage girl, Hanashiro Mari’s only dream. Every single day, she could only gaze at the happy world outside of her ward through the window, unable to do anything else at all. Due to her illness, she had been in that ward for as long as she could remember ever since elementary school. She wanted to live, wanted to be normal like every other teenagers, but deep inside she knew she could never become healthy once again. While cursing the world for her cause, she slowly awaits for her death on her sickbed. And because of her intense desire of wanting to live, (Sanbikime) [Translation is: “the 3rd one”], one of the most mysterious original out of (The Original Three) came to her side and turned her into a Mushitsuki.


Yet, even after she was turned into a Mushitsuki, her torture did not end. It turns more ironic than ever. Because of (Sanbikime), Mari came to know the existence of an “Immortal” Mushitsuki; as its name apply, it’s a Mushitsuki that will never *Die*. Dying to obtain that Mushitsuki’s ability, Mari began her *hunt*. Every single night, she would go out and search for this immortal Mushitsuki. Because of this, she was unofficially aliased as the (Hunter) by many.

Yet, no matter how hard shes tried, no matter how many Mushi she killed, she was unable to find him. But she didn’t give up, because if she gives up, she would eventually die. So in order to fulfill her dream of keep on living, she could only continue her hunts.

And it was then, a teenage girl came into her life. Ichinokuro Arisu, one of those very typical energetic-type girl, suddenly came to her side. Slowly, she became Mari’s close friend, and brought her joy, hope, and jealousy.

Arisu’s words slowly became her sole reason of wanting the time to pass by faster, and at the same time, greatly increase her eager of wanting to live. However, her fate did not permit her to do so. And slowly, she was brought to her end. 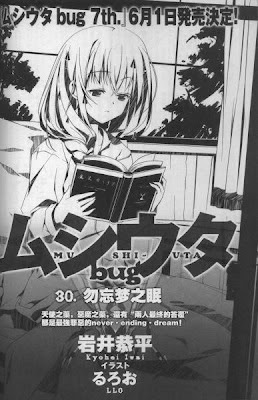 The protagonist in the book chose the devil’s medicine, but Mari didn’t understand why she chose such option. If it was Mari, she would definitely pick the angel’s medicine, she wanted to live on so bad, wanting to see Arisu’s smile once more and hear her saying “See you tomorrow” once more. And thus, she began her last hunt.

And perhaps god was playing a prank on her. After her long search, she finally encountered “him”, the “Immortal” Mushitsuki. She told him that she wanted the angel’s medicine, and then the figure questioned her.

“In front of you, there might perhaps be two medicines… … then let me ask you a question after you taken the angel’s medicine…”

The figure suddenly changed his tone, and continued with clear and serious voice.

“Who will be next you after you obtained a new life?...”

Upon hearing that, Mari's mind was shaken. She was unable to make a decision. Between her dream and her most precious person, she was unable to decide. And without giving a proper answer, she met her end.

Yes, that means she died. The story continues with her death first of all. However, Mari’s (Mushi), the Morpho Butterfly [Or Morpho patroclus], lived on and was passed onto Mari’s close friend, Arisu.

What’s her purpose of leaving her Mushi to Arisu? What’s it that she truly wants? The angel’s medicine or the devil’s medicine?

Arisu, who became the new owner of the Mushi, yet she was not a Mushitsuki herself; just a merely human, began her own search for Mari’s last message. Butting her head into Mushitsuki’s business, she then encountered Kusuriya Daisuke, who was sent by the SEPB to monitor over her and the strange phenomenon. And so, together with Daisuke, they began to seek deeper into the meaning of Mushitsuki and the existence of Mushi.

And so yea, they started living under the same roof. @.@ ( Before you go wtf! What about Shiika?!) They lived in the different room lol. However, their relationship is quite complicated. It’s more than that of a close friend, but not entirely like that kind of a couple [Yes, like I said, it’s complicated]. Although Daisuke acted like a Tsun-Tsun in front of Arisu all the time and even told her to stop butting her head into other people’s business, he still risked his life on protecting her. For example, shielding shitload of damage for her, taking her fall by becoming her cushion and other things. On the other hand, Arisu acted like a Tsun-Tsun as well xD, even though she treated Daisuke like a slave most of the time, even punched/kicked/did all sort of wrestling moves on him, she treasures him just as much. There’s one time when Daisuke said no one would feel sad if he dies, and Arisu slapped him for it. Yes, there’s more to come but I shall only spoil so much. 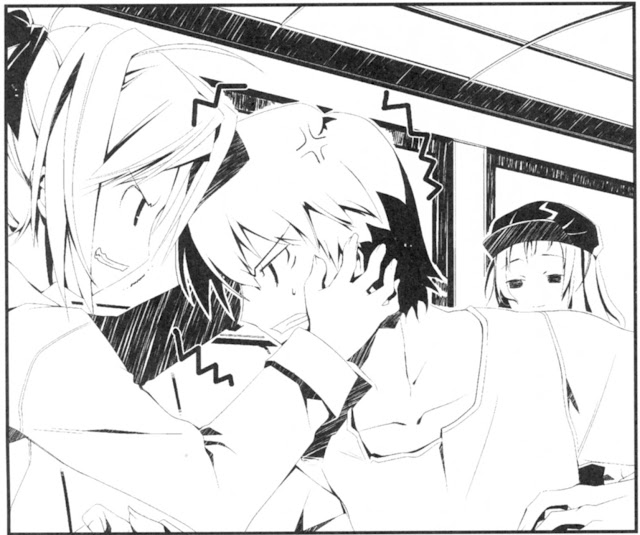 And throughout their journey, the Morpho buttery didn’t just stay quietly by her side. When Arisu was push into dangers, the buttery would fuse onto nearby objects (most likely sticks or long pole objects) and became a silver lance for her to fight. This however, became much worse later on as the Mushi would forcefully fuse with her parts of her “body”, granting her superhuman agility and durability just like Daisuke. And at times, Mari’s personality would also surface along with this ability. Because of this and Arisu’s overwhelming power, she was finally assigned a level one title, (Lancer), the “last officially registered” level one ranked. 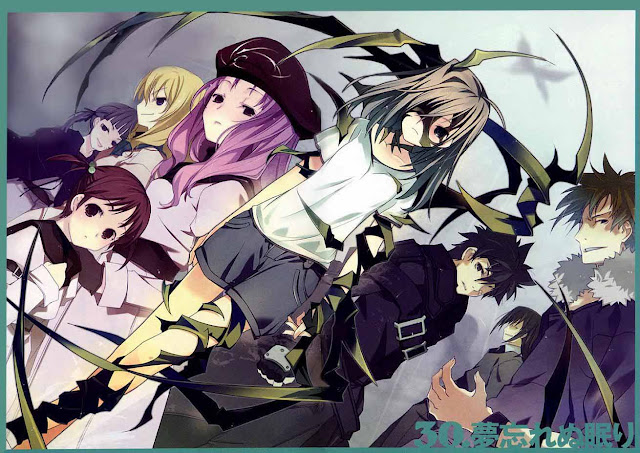 Even with all those things happening to her, Arisu didn’t give up her search. She wanted to know why Mari left her Mushi to her, wanted to know more about Mushitsuki, wanted to save them. She no longer stands as a watcher anymore, but involve herself into all sort of mess, and thus, dragging Daisuke alone with her.Together, they encountered numerous Mushitsuki who became their allies, and enemies. For example, Harukiyo, C, Nene, Kasuou, and etc more.

And the result of her reckless actions was a hope that Mushitsuki had never once dream of.

--- A peaceful world without Mushitsuki. [Meaning that everyone will be normal once again]

In that shooting stars night, she gathered all of the level one ranked, (Kakkou), (Ladybird), (Harukiyo), [Since Shiika was turned into a fallen she didn’t get to come xD] herself, and hundreds of Mushitsuki to challenge one of the mighty originals.

However, just then, Mari appeared and overtook her body, bringing forth the answer that Arisu seeks. With her comrades falling down one by one, how would she and the others able to stand against the great enemy? And in the end, what's the answer that Mari gives? Would she take over Arisu's body, and be reborn? or would she disappear forever?

--- If you were given such choices, which one would you pick? May her answer bring us a wonderful memory we could all remember.

The End of the Teaser/Summary

Thank you for reading this far! Sorry for my bad English, its not really my strong point anyway >.>. And finally, a treat to those who wanted to know more about this series. Many thanks to Shadowzeroheart from Baka-tsuki as well, i looked at his spoiler for some reference.

I do not own this video! All credits goes to 杏本詩歌(Anmoto Shiika) @ BILIBILI.

Thank you once again, and also, i claimed Mari as my Waifu, so hands off!! And another biased comment from me, i favored more Arisu X Daisuke xD. Well, most of us that read the series seemed to like Arisu as much as Shiika, since we got to know more about her (almost all 8th volumes were center around her) so ya, compare to Shiika, she gets more play. And a head up, the titles that i used in this teaser/summary might change as we still haven't nailed them yet

And so, stay tuned for the first chapter release this month! (I think if not late by a bit) The content's page for the first volume should be out soon. And also, the release of chapter 4.06 of the 2nd volume! (I've already finished translating it, it should be out in a few days ^^) Peace~