It has been a while since I had done a review, but I enjoyed reading this novel so much, I just feel compelled to talk about it. 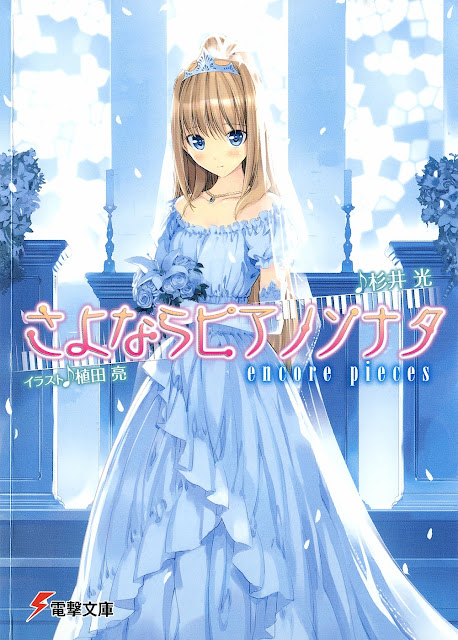 Firstly, a brief summary of the novel.

Naomi Hikawa is the main character of the novel, and the son of a famous music critic. Due to that, he has some musical knowledge, though it is pretty much limited to that, and perhaps the simple playing of a guitar. His hobby is to repair things, and has developed quite a good skill towards it.

One day, while going to his "secret" scrapyard to gather some spare parts, he saw a girl playing an abandoned piano there. Somehow, the music had caused the junks to resonate, creating an illusion of a junkyard symphony. He was mesmerized by the familiar sounding melody, but he could not remember the tune. Just then, the girl noticed him, and called him a pervert/stalker. She then requested him to forget about the incident.

Back at home, Naomi realized that she is the piano prodigy Mafuyu Ebisawa, who had vanished from the music scene for some unknown reason. He met her soon again, with Mafuyu as the transfer student of his class. She declared to the class that there is no need to know her too well, since she will be gone soon. She had even snatched away an abandoned music shed that he had customized for his  own personal use, in order to play her guitar. Not liking her cold personality and her sharp tongue, Naomi vowed to take back the music shed from her.

Somehow, things became such that he was roped in by a senior, Kyouko Kagurazawa, and childhood friend Chiaki Aihara, to start a music band. His mission was to get Mafuyu, the required forth member, into the band. However, he soon realized the shocking truth behind Mafuyu's reason for disappearing from the piano scene and playing the guitar. Knowing that, will he be able to forget about the melody he heard from the junkyard, or will he be able to help Mafuyu play the piano again?

Coming from the author of the ongoing Kami-sama no Memochou (though I had only known of it after I had finished volume 4), this is a really impressive 5-volume story about the romance of two characters, who went through a long painful path of hardship due to feelings that are not conveyed properly between them, the timidness of both of them, and the feeling of inferiority by the MC.

Firstly, the characters. We have MC and three girls setting up the core characters of the story, as the members of the musical band.

Naomi Hikawa a really good main character of the story, and it is mainly narrated from his point of view. He's a lean mean tsukkomi machine, and that makes up for quite a few bits of laugh in the story. He is also amazingly dense, almost a trait that is required for most male MCs in the current day LNs, and a trait that I will normally find irritating. I still do, but I had also realized that it is essential for the plot and drama of the story, which makes it much more palatable, and the fact that the MC acknowledges it makes it better. Sadly, Mafuyu is not good at expressing herself explicitly, and the other two female characters have no intention to point that out either. His relatively poor playing skills in the band also sets up the intriguing inferiority complex he has later, which makes the love story a little more heart-wrenching, and way much sweeter at the end. 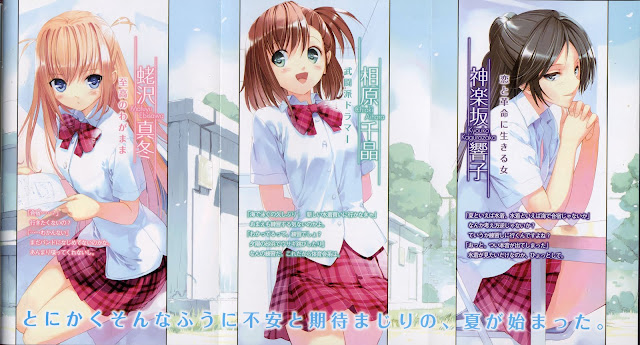 Ebisawa Mafuyu is the female lead here, one who is musically talented, especially in piano. She gets angry easily, and is a timid girl who loves to cry. As such, she hides that by setting up an invisible wall around her, and having a sharp tongue at people whom she is not close to. I can't really call her a tsundere though, because it would not really fit in both the classical sense and the current-day meaning, from how the story portrays her. She does get angry at MC and gets slightly violent at him from time to time, but that is more due to the MC being so amazingly dense, then her not being honest with her feelings. However, she is the type girl who waits for the guy to confess, and coupled by MC's denseness, has resulted in the romance being derailed for quite a fair bit. She does hit me hard in how cute she is though, and her character just comes down well on me at all areas. She will be one of my favorite female characters for a long long time.

Childhood friend, Chiaki Aihara, is the girl who follows the destiny that most childhood friend walks on - being severely friend-zoned by the male MC. Has a huge amount of respect and love for Kyouko Kagurazaka, though not those of a yuri. She is there to drive the plot, and honestly, I do feel quite sad for her character, especially the way how Naomi treats her.

Kyouko Kagurazaka is the brains of the band, and if I am to describe her as simply as I can, it will be this - she is practically the Nikaido Arashi of the novel, minus the weird outfits. She is a bisexual (though still leans a little more towards the guys side) that kind of thinks of the band members as her lovers, and is amazingly smart. She is the person responsible for pushing the MC along the story, though she often stop short of helping Mafuyu, since she loves the MC as well. Her story of her first love, detailed in the Encore Pieces of the story, is also quite nice, and a tad bit bitter and touching.

There are various minor characters, the ones worthy of mentioning are Naomi's dad, who provides the rest of the laughs to the story, and a young famous french violinist named Julien Flaubert, who is a boy (and a trap) that falls in love with Mafuyu since they were young, and later on with Naomi as well. He is the one who taught Mafuyu how to play the guitar, and also the reason for Naomi's inferiority complex in the book, since he was poised to partner Mafuyu in a piano-violin combination due to his talents. In that sense, you can't really call him a minor character, even though he appears only at book 3 onwards.

One thing I loved about this story, is the pacing of the story. Many LN these days falls into the trap of being too overly drawn out (in the romance part), just so that the author can churn out more books as he pleases. In the meanwhile, the readers are left with the story moving at a snails pace, if not at all. I will not have much of a complain if the book is mainly of a fantasy story or something, but a lot of times, these stories are romance mixed in with comedy/slice-of-life/rabu-rabu/etc. To borrow the words of Nisio Isin/Senjougahara, I hate reading romance books that drags the plot on and on, despite it being painfully obvious who the MC is going to end up with. I had quite a lot of times nearly wanted to slam my ipod in frustration at the development of the stories due to that reason, though I'll not go that far as to name the titles, since some of them are quite popular among the English community.

Sayonara Piano Sonata avoided that trap by focusing on the plot, developing the characters nicely, and ending off the story satisfyingly within a decent span of four books. It was well executed, so kudos to Hikaru Sugii for that. The Encore Pieces, like the name suggest, is an extra that details on the lives of the characters in the future, as well as some back-story. One chapter of the encore, in particular, made me feel all warn and fuzzy. It makes me feel that it is all worth it, to burn through my time at a rate of one novel per day (despite my busy schedule), just so I can get to that part.

The next thing I like is how the two remaining girls of the "harem" are used in the story. Rather than to use them as fan-service bait, the author had chosen to bypass most of that, and instead concentrate on using them to develop Naomi and Mafuyu. This sits well with me, since I was reading this novel with me viewing it as a 'serious' series that focuses on romance. No other girls are added into the series just because, and the inclusion of Julien into the cast, as I had stated earlier, is a great move that furthers the pace of the plot.

Another thing which I had liked is the use of music as the main theme of the story, which I feel is a masterstroke by the author. Firstly, the setting of having the characters of the story as musician is a really good move, since artistic people are generally known to be more feeling, more sensitive, and more emotional (especially so for Mafuyu). Also, from the comments that I had read from the musically inclined readers, the author had done quite a bit of research into the music pieces he had used for the story, and most of them fit in perfectly into the plot of the story, as the author had intended. However, even if you are those who do not know much about music - just like me, do not let that detract you from reading the series. This reminds me of how similar it is to Hikaru no Go - you don't have to understand Go to enjoy a story about wonderful character development and a bitter sweet love story. In fact, the novels had caused me to have the urge to go and listen to some of the music, so that I can better understand the story and connect with it better.

Lastly, there isn't anything about the plot that seems to be overly fictional, which makes it much easier to connect to and feel. Being based in a real-life settings with no fantasy to the story, as well as decently believable and realistic characters, just makes it a lot better as a romance novel. I am not too sure if I had conveyed that point properly across properly. I still know it is fiction, and ends a little too nicely (compared to the reality), but that is to be expected from fiction. However, not having girls falling in from the sky, or a new girl getting into the harem every new volume, or random pantsu shots every 10 pages into the book, just adds in to the realism of the book and it's romance.

All in all, this is a really solid romance title in my opinion. There is so much that I want to talk about, so much that I want to rave, that I am having some difficulties in trying to get my ideas across. Then again, that is also part of the theme of the novel, so perhaps it is inevitable that I will end up like that in my review as well. I urge readers who enjoy reading 'serious' romance to try the book if you have not done so, especially if you understand Japanese or Chinese. My next review will probably come not too long after, since I am currently reading Otorimonogatari.
Posted by zgmfx09a at 10:15 PM