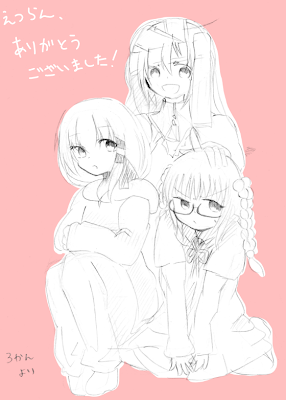 (Kakkou) was lurking in the shadows under the elevated road’s handrails.

On the other side of the narrow lane, people on their way home could be seen crossing back and forth. The business district located in the downtown area of Ouka city was right in front of him.

At his feet was a puddle which had his own shadow reflected on it. It showed just how much his figured had completely changed to which in primary school.

Equipment such as the thick coat, gloves, and thigh boots were covering his whole body. All of the equipment was made of special materials, which could withstand fierce impact. The big goggles which hid half of his face, pushed his hair up and made him look like a devil.

This equipment was unified in its black color, which was standard for equipment used by the Special Environmental Preservation Bureau East Central Division. And all equipment was manufactured in consideration of fighting with Mushitsuki, especially the goggles, which could be said to be the crystallization of the newest technology.

Suddenly, with a loud hum, a red spot appeared in (Kakkou)’s goggles.

In his view, there was a map, showing the escape route of the formidable Mushitsuki called (Fuyuhotaru).

Right now, (Fuyuhotaru) seemed to wander near the residential district. Her walking path neither showed any purpose nor a sense of unity, whether she would come to (Kakkou)’s location or not was still a doubt.

According to the operation, the unified squad, which consisted of elites from each branch, would soon be in contact with (Fuyuhotaru). The force which (Kakkou) was in, which consisted only of the East Central branch under the jurisdiction of Ouka city; was actually in place far away from the battleground in the name of supporting the rear. If things went smoothly they would be able to capture (Fuyuhotaru) and bring her into their branch— the higher-ups probably thought of such self-interested issues when they devised the operation.

“I guess that means we newbies have no chance of appearing on the stage?"

It wasn’t until then did (Kakkou) become aware of the fact that he was a little bit nervous, so he immediately relaxed his shoulders.

In addition to (Kakkou), at least several dozen other combatants could also be sensed lurking in the range of a hundred-meter radius. In the shadow of the building, the figures of combatants wearing the same equipment as (Kakkou) could also be occasionally seen.

"Well, of course, being comfortable and doing nothing is best."

After hearing Haji’s words which seemed to have a hidden meaning, he considered that things might be worse, but the unified squad led by (Namie) was the force setting the main fighting force of SEPB. So, (Kakkou)’s first mission might end smoothly.

Just as he warmed up to the idea, a voice boomed out from the wireless communicator of his goggles.

"Attention to all of the East Central Division’s combatants awaiting in standby.”

It was an unfamiliar voice; it was probably the director of East Central Division, Takakuwa Azuma.

As a matter of fact, He did say he would personally command the force.

However, at the moment, the standby team had absolutely nothing to do at all — he was probably planning to use this chance and show off his power and prestige as a leader right?

But just then, Takakuwa Azuma abruptly issued an unexpected command.

"From this moment onward, the objective of the operation will be changed, the East Central Division is ordered to execute a top-priority mission."

"Before executing the operation, I hope that you combatants have already grasped the current situation. As mentioned before, the “Ishu” found about two hours before, (Fuyuhotaru), is still on the run. Sooner or later, forces consisting of each division including the Central Headquarters, make contact with her, and then defeat her. However, it should be a tough battle, which will weaken the fighting strength of SEPB and make it fall into a temporary confusion. As a result, the force protecting the Central Headquarters should be weakened right now. ”

What the hell is this guy talking about？

The first half of what Takakuwa Azuma had said, (Kakkou) could follow quickly, but the second half seemed to have not the slightest connection with the current situation at all.

Just as he was feeling strange, the map on his goggles’ lens was suddenly replaced by another image. It was the map of the Ouka city, which was gradually enlarged, displaying a route connecting several cities.

"What? What does this mean? This has nothing to do with (Fuyuhotaru), right?”

“The campaign that I have been planning for many years; it is finally about time for it to be implemented. All combatants are to be called off standby and immediately take action. I will take the lead, but all combat-related instructions will be given by the level six ranked member, (Hozumi).”

An unexpected answer suddenly came from behind (Kakkou).

(Kakkou), surprised, turned back only to see a young boy come out of the shadow of narrow lane. Though he had exactly the same equipment as (Kakkou)’s, (Hozumi) was a head taller than him; and judging from his deep voice, he was probably four to five years older than (Kakkou). He also dyed his hair blue and combed them into seven braids.

Since when did this guy get here…?

In the current stage, “Ishu” Mushitsuki were very rare existences. With a title such as a “level sixed ranked”, he had the right to become a squad’s leader. It’s been rumored that he was quite a powerful foe. Even (Kakkou), who was still a trainee until now, had heard of his name.

Following after (Hozumi), combatants began to appear one after another, advancing in his direction.

(Kakkou) immediately felt something was wrong, so he overtook (Hozumi). 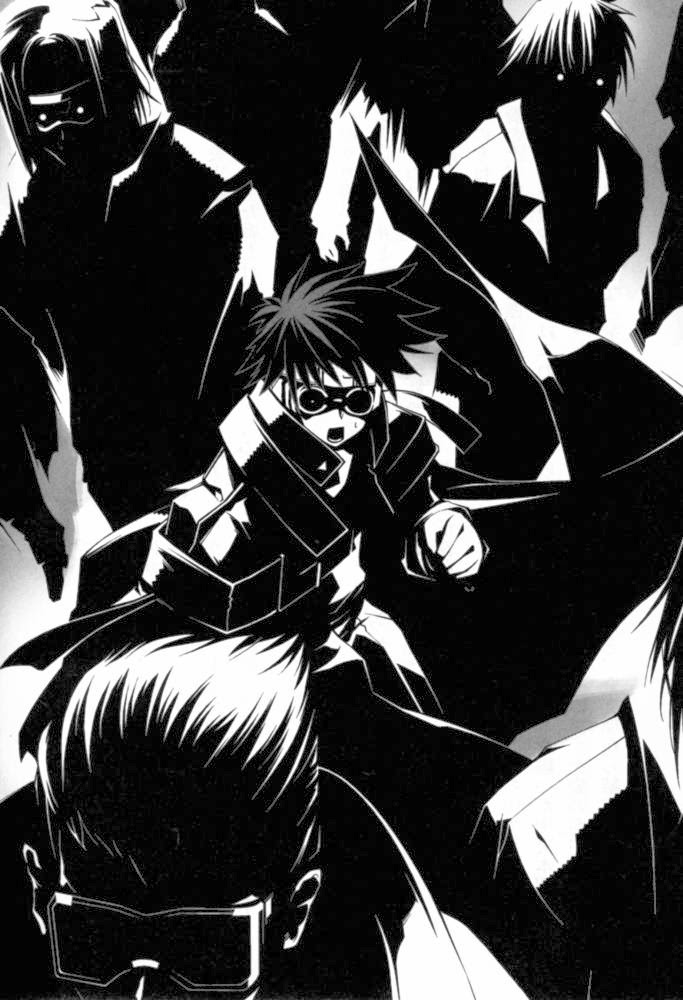 “Is today your first day doing a mission?”

(Hozumi), glancing at him, said with strange and deep tone:

“If it’s so, it cannot be helped that you don’t know… We actually have been waiting for this chance to come for a long time already.”

“We cannot go on living… like this anymore. We Mushitsuki, have been ordered about indiscriminately according to the Central Headquarters wishes, and are destined to be thrown away like rubbish sooner or later. Only we can save ourselves...”

“Haa? What the hell are you talking about?”

Ignoring confused (Kakkou), (Hozumi) and other combatants began to run on the indicated route which came from the goggles.

At the same time, Takakuwa Azuma‘s declaration rang in his ears.

"East Central Division will now begin to assault the Central Headquarters, and take it over. All combatants are to immediately leave Ouka City at once with haste!"

In front of dumbfounded (Kakkou), all combatants summoned their (Mushi) at the same time.

Dozens of Mushitsuki grabbed onto their respective (Mushi), while some others rode together on the huge (Mushi)’s back and flew straight ahead.

"I repeat, East Central Division will now break away from Ouka City, and take over the headquarters at once!"

Amidst the charging army of Mushitsuki, only one person ---

(Kakkou), was standing still, at a loss.

Other than me coming back, another good new to you all.
I kinda found another TL who's interested in helping out with Mushi Uta translation.
This one is different than the other one who helped out during the V3, it's a new guy go by the name of Jdyk and this chapter is translated by him! A warm welcome for him would be nice ^ ^.


Sorry for the Hitaus of the past months, I'm officially back now~
(But since school has started for me, I'll be prob tling at a slower pace.)
Posted by Wing at 11:17 AM