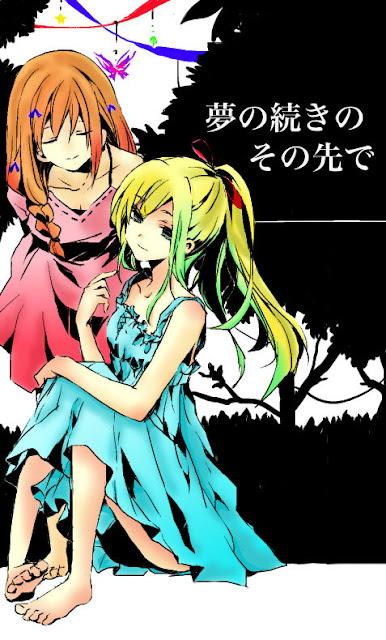 Artist: 赤誠, Colored by: A It's you!
Featuring Mari and Arisu =)

The Dream Fades Before Dawn --- No matter what kind of dream it is, good or bad, they will all fade away when the dawn comes ...

The best title I could think of for this chap =/

Bit by bit, Yuu could feel herself slowly changing.

In the past, she had been trying to solve every problem by herself.

Thinking that relying on others would only cause them trouble, and she also felt remorse as if she had submitted to her own weakness.

However, in the past three days that were completely out of any reality that she could ever imagine of, she encountered Shiika and Ubuki.

At first she couldn’t bring herself to trust them, and also felt abandoned from time to time.

Even though uneasiness and fear still lingered and pressured Yuu, whenever she was with Ubuki and Shiika, she would feel courage surging from within. The thoughts that she would never be able to accomplish anything would also change.

Just like this, the three of them would head to Ouka City ---

As for Yuu, she would also believe in them to the end.

--- I think that it takes much more courage to trust others, than trying to overcome it alone.

After hearing Shiika say this line, Yuu made up her mind. She wanted to change herself from someone that always tries to solve everything on her own, and believe more in Shiika and Ubuki until the end.

The three of them would each realize their goal.

However, Yuu never thought about anything after that.

That’s right, after everything is over; let’s go to the Ferris wheel together, just the three of us! I’m sure Shiika-san had probably never ridden one before. After that, we should go shopping in front of the train station, and eat Crepes together!

The Yuu, who was slowly entering the dreamland, was smiling rather happily from seeing the image of them walking together under the sunset of Akamaki City.

Because of her body trembling slightly from the cold, Yuu woke up.

Outside of the windows came the sound of birds chirping.

Today seemed like a good day as well; bright sunlight could be seen sprinkling down through the windows that were dirty from dust.

Yuu and others had stayed a night over at a deserted store.

The floor was hard and cold. After getting up, Yuu could feel her joints aching in pain. If it were not the fact that she was too tired, she would never fall asleep in places like this right?

Yuu rubbed her eyes as she tried to find the glasses that she left on the floor.

“I think that one looks better?”

“Yeah, I think so too, it would definitely suit Yuu-tan!”

From outside came the voices of Ubuki and Shiika; it seemed like they had woken up earlier than Yuu.

After Yuu walked out of the store, she noticed that the sun was rising high in the sky.

She had originally planned to just take a quick nap, but accidently overslept.

Yuu hurriedly looked around for the other two.

Just then, she saw a tall figure standing still on the road and almost accidentally greeted this stranger.

Due to the reason of the figure being so tall, Yuu had accidentally mistaken the person as Ubuki. But this person was actually taller than Ubuki; she seemed like a grown up woman. Because Yuu didn’t have her glasses with her, she couldn’t see this woman very clearly. All she could recognize at a glance was the fact that the woman was wearing a deep crimson red coat, and a pair of round sunglasses.

--- After the woman had seen Yuu. Perhaps she was smiling? Her bright red lips were curved slightly.

However, she suddenly turned around with her coat dancing in the air, and walked away.

Yuu gazed dazedly at the woman’s fading figure, before suddenly coming to her senses.

There’s no time to worry about a strange woman right now!

Turning to the other end of the street, two teenage girls could be seen walking closer while giggling to each other and chitchatting.

Upon seeing such a leisurely view, Yuu could feel a rage burning up within.

--- These two, seriously! Don’t they have the slightest idea of what’s going on?!

If they had woken Yuu up, she wouldn’t have overslept.

Even though there are enemies everywhere, why are they still walking about so leisurely?

“Shiika-san, Ubuki-san where did you guys wander off to?! If you had woken up already, why didn’t you wake me up earlier as well?!”

When the teenage girls saw Yuu, they showed a bright smile. While on the other hand, Yuu was putting on a pouting look.

“W-What’s…wrong with you guys?...Ah, I almost forgot, have you guys seen my glasses? I couldn’t find them when I woke up ---“

Ubuki took out the thing that she was hiding behind her back.

It was a pair of red-framed glasses. Different from the ones that Yuu was wearing before, this pair of glasses had thinner lens, and a cuter design.

Ubuki put on the glasses for Yuu. The size of the glasses fit perfectly, and the degree was just right. Through the view that had just become clearer, Yuu saw the smiling faces of Shiika and Ubuki.

“Eh? Where did you get this pair of glasses…?”

“Yeah. When I heard Shiika-tan was giving the painting to you, I was also thinking about what I should give to you as a present. Even though you’re not a Mushitsuki… No, even though you’re possessed by nakumushi and yowamushi, yet you still try so hard. That’s why, this is your reward!” [T/L: Similar to before, nakumushi = cry baby, and yowamushi = weakling.]

“I’m not a nakumushi---B-But, where did you get this pair of glasses… We shouldn’t have any more money left……”

Even though Yuu was surprised by the sudden event, in her mind, she was taking their current situation into consideration. The fact that their funds were exhausted; she had already told them the night before in the store.

“Don’t worry about the small details!”

Yuu herself was trying to reject the fact that she had noticed this, because it was just too absurd.

The necklace that Ubuki always hung around her neck --- was gone.

As if she had realized Yuu’s gaze, Ubuki desperately tried to show a smile, before putting up her hand to do a salute.

“Reporting to captain! The fund was obtained from a nearby pawn shop! It was a strange store that even allowed minors to trade; our whereabouts may have been exposed!”

“Didn’t Ubuki-san say that… the necklace was given to you by your boyfriend?! Didn’t you say that it was a remnant of your hometown?! Didn’t you say it is very important to you?! So why… Why did you--!”

“It’s not something you should be laughing about! Why do you always…always…”

“When I saw that pair of glasses, I thought it might look good on you and I just couldn’t hold back! If I were to meet the person who gave me the necklace after I died, I will just tell him that I sold it!”

After Ubuki finished saying that line, she scratched her cheek with a lack of confident expression.

“This is the first time ever in my life that I gave a present to somebody…You don’t like it…?”

That’s just so sly of you!

If you were to show me that expression, there’s nothing else I can say! Even though I still have a lot of things that I want to say to you, I can’t squeeze them out of my throat---

“…Something that’s this important… you wasted it on such a trivial matter, rather than saving it as funds for escaping… I just can’t believe you guys… Why do you always…”

Even she herself didn’t know whether she should be happy or mad right now. The Yuu, who was giggling like an idiot, was shedding big droplets of tears from her eyes.

Ubuki immediately replied with a smile.

“Even though we will not see each other again after this, Yuu-chan, you have to take care!”

It was as if time was frozen in place. Through her stunned gaze, she could see Shiika revealing a stern expression.

Yuu couldn’t understand the words that Ubuki had said; she just merely gazed dumbfounded at the two of them in front of her.

Yuu kept on waiting for Ubuki to laugh the matter off with a “Just kidding!” attitude as usual. However, Yuu never heard her say that.

When everything was over, the three of them would go to take the Ferris wheel, and then eat Crepes together once again.

The scenery that appeared in Yuu’s dream, bloomed in her mind like fireworks before instantly fading away, like an illusion.

Was trying to cram for my exams but it seemed like I've failed to do so lol.

Anyway, back to the chapter~ There's a couple foreshadowing here, I hope you can figure it out. If not, here's some hint... (The woman that Yuu almost bumped into~~ xD) 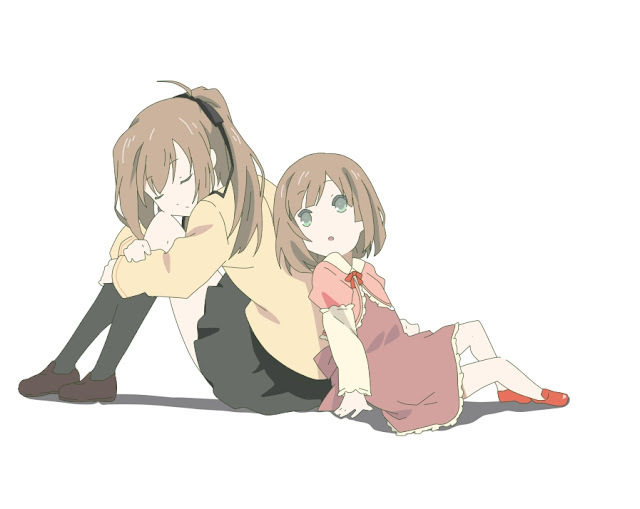 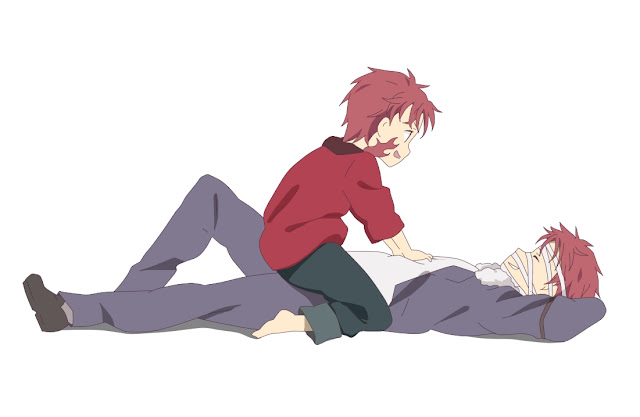 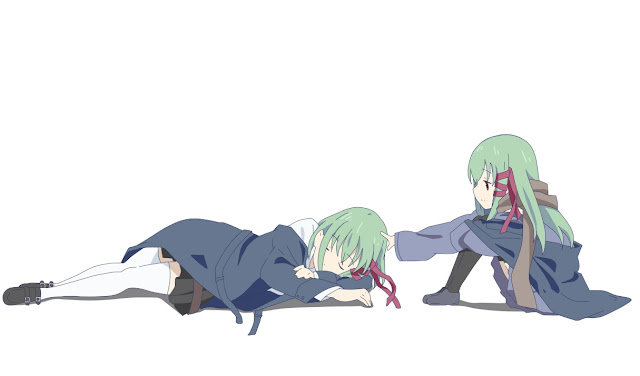 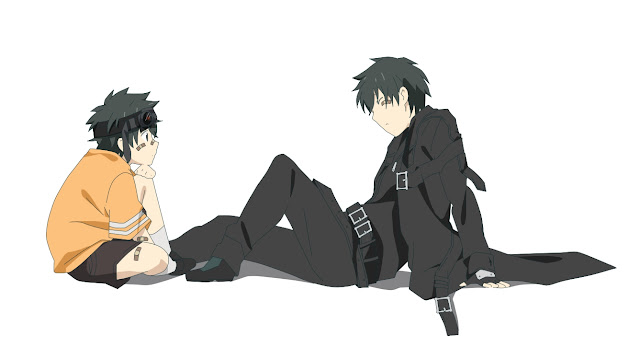