Brief thoughts on 期間限定いもうと (My sister; only for a year)

If you guys don't already know, I am pretty much a sucker for LNs with imouto. Or traps. Traps just make anything better. Sort of. Imouto's kinda the same as well, but it depends. Till now, the only imouto-centric LNs that I've tried and dropped are <仆の妹は汉字が読める (My Sister Can Read Kanji)> and <妹ドラゴン 兄若ハげ (Dragon Sister, Bald Brother)>. Those two LNs man. There's quite a few like, shitty LNs I read just for the guilty pleasure, but those two are on a totally different level. Then again, <My Sister Can Read Kanji> is sort of a satire LN, so perhaps it's not just my thing. But the Dragon + Baldie thing - pretty damn bad.

Anyway, back on topic. This LN here. I must say though, the cover art is pretty cute. I thought it is Cuteg for a moment, but it isn't. Think he's doing the manga for this title though, but I am not too sure. 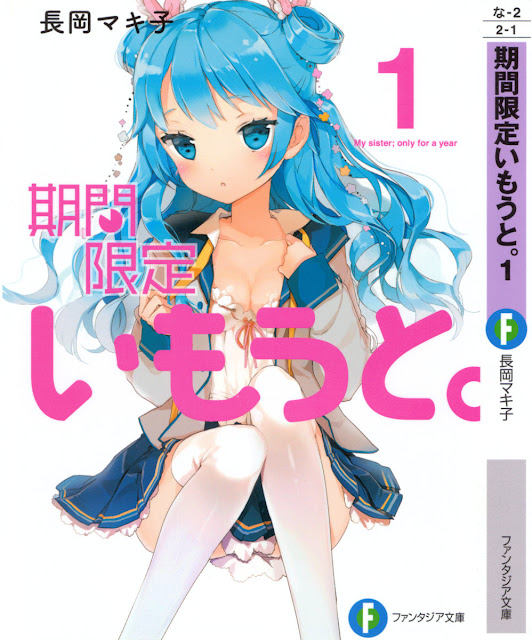 Main story's about a guy, Souta, with yankee looks (think Ryuuji from Toradora) - and everyone's afraid of him. The only two friends he has are the boyish childhood friend Mimi and a guy he knew for a long time. Has a younger sister, but the younger sister is sort of in her snobbish rebellious phase right now.

I won't go too much into details, but somehow the girl on the cover page (Saaya) is some rich ojou who is out of touch with the way society works due to how sheltered she is (her grandma is to blame though). However, she has never experienced any sort of real family life, so MC kind of took her away from her grandma in the spur of the moment so that she can experience family life in his house. The grandma later agreed to have Saaya stay in MC's house for a year to experience some family love before she weds her fiance. And there you have it, Souta has another imouto for a year. 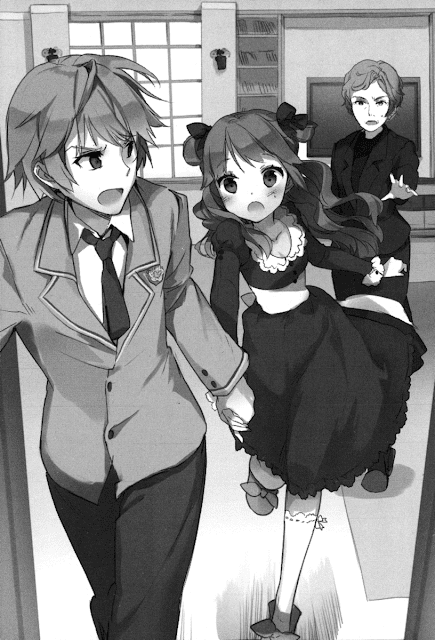 MC's kind of good looking in the illustrations actually, doesn't really look like some fierce delinquent. Then again, he dyes his hair brown, but for a good reason. Good at housework and cooking. Tl;dr, a Ryuuji with an imouto. He sort of acts as her fatherly figure as well, since their dad died when they were young. 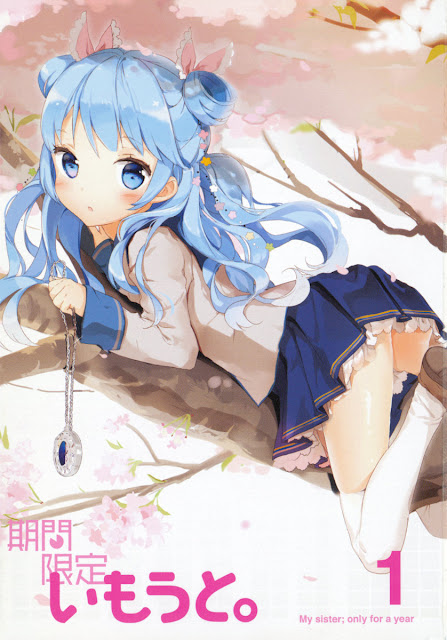 Saaya, our main heroine. The best way I can describe her is a less autistic and more assertive Mashiro (from Sakurasou). MC's imouto for a year. Likes MC a lot, but we're not sure if it's love (oh who am I kidding). 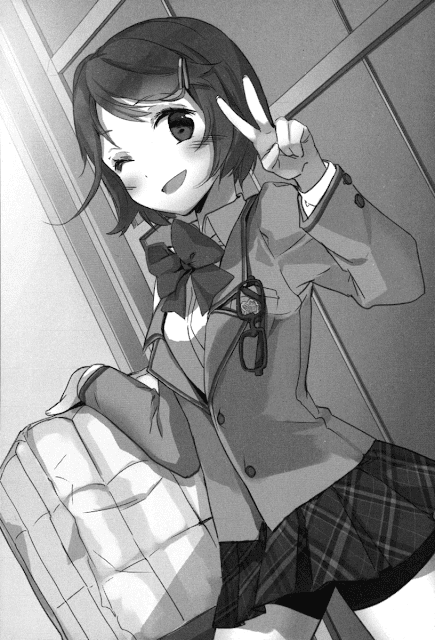 MC's childhood friend, Mimi. Sporty and genki type. Star striker for the school's football team, but need to work a little on her feminine side, since she is a little boyish (......really?). Loves MC, but MC's too dense to realize it, as usual. 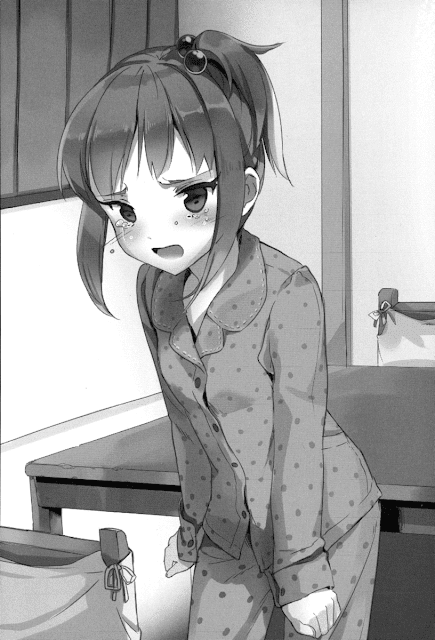 MC's imouto. Secret bro-con, kind of pushy at the start of the novel. Got really jealous when Saaya came and took some of the attention away.

Normally, Saaya would have been the best character for me in the LN. Normally. But then, there's MC's best buddy. Fuck yeah. Step aside, imouto. Introducing Natsuki. 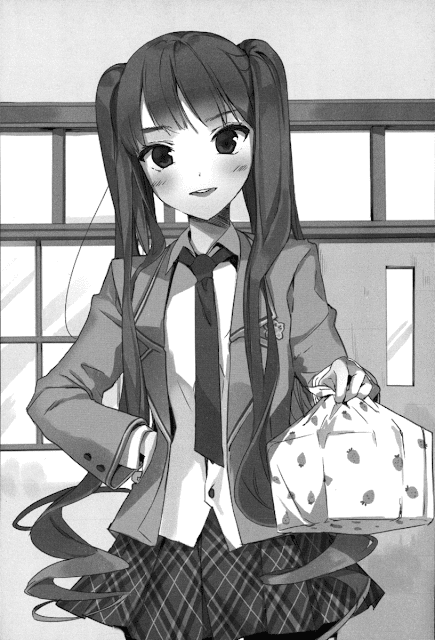 Fuck yeah. He is brought up as a girl since his mother really wants a daughter, but instead gave birth to five brothers before him. And he's fine with dressing up like one. Speaks with a guy's voice and talks like a guy, so that's kinda uncommon. I'll like to imagine it as something like Mariandale from Ixion Saga DT (the things I'll do to get Fukujun voice him if this ever gets an anime). He did wear a guy's uniform during his middle school days, but it looks really unnatural on him with his girly looks and long hair, so he wears a guy's top instead and pairs it up with the school's skirt. Not too interested in girls at the moment (he says he will only go for girls who are prettier than him). 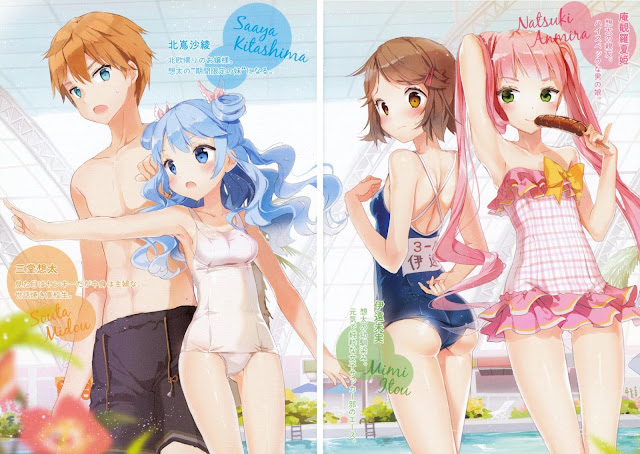 All in all, a pretty average LN lifted up by the imouto and the trap. It's nothing mind-blowing, but pretty decent as a time killer. I must say, I am doing this because Natsuki looks awesome in that one piece swimwear. Like, really awesome.

If it's cute, just do it. My motto still stands.

Well, I'll begin working on SPS chapter 7 soon, I guess. As for inquiries on whether I'll do vol 5 of SPS, the only thing I can say now is that I'll do it if I still have the time to do so when I get a job. I can't promise anything. So there.
Posted by zgmfx09a at 7:25 PM

Email ThisBlogThis!Share to TwitterShare to FacebookShare to Pinterest
Labels: General, My sister; only for a year