Also, welcome Akios on joining the team =D, this chap is edited by him since skat is busy wif exams.


Accompanied by a loud sound, the bullet was fired from the revolver in Daisuke’s hand.

However, before it could even reach Harukiyo who was completely enveloped in flame, it got absorb by the silver-colored mirror Mushi halfway.

It was Kusezaki Ume. The abdomen of the mirror Mushi that Ume is riding on was reflecting Daisuke’s pitch black-coated figure.

Daisuke barely managed to dodge the bullet that was fired back at the most critical moment, but immediately after that, the giant burning tiger beetle stretched out its huge tusks and came leaping at Daisuke.

Although Daisuke continuously fired numerous bullets at it, the flaming (Mushi) suddenly distorted its form in front of him. Because of the storming heat wave that was closing up on him, Daisuke could only cover himself with his coat; and with him as the center, a fire storm exploded.

Both Daisuke’s stamina and consciousness were being push to their limits within the suffocating sea of flame.

He barely managed to squeeze out his energy to aim at Harukiyo and fire a bullet. The fire storm was blown away by the power of the bullet, but ---

The bullet was immediately returned by Ume’s mirror Mushi and struck Daisuke’s abdomen.

Although this time it didn’t send him flying, Daisuke was unable to endure the overwhelming impact and immediately dropped to his knees.

“So weak, (Kakkou), you’re so weak! Where’s that spirit of yours when you defeated the (Ladybird)??”

Harukiyo, who was manipulating the soaring flame, laughed leisurely as he lowered his head to despise Daisuke. Meanwhile, Ume was chuckling next to him on his silver-colored mirror Mushi.

“Your dream is only worth so much?”

Facing Harukiyo who mocking at him, Daisuke stood up with his trembling legs.

The battle against Harukiyo was simply a unilateral massacre; Daisuke had to dodge the attacks of the flaming (Mushi) that his bullets were ineffective against as he tried to attack its host, Harukiyo. But every single one of his attacks was reflected back by Ume.

Daisuke’s body was completely covered in injuries already. The attacks made by Harukiyo, and the bullets that were reflected back had almost broken through the long coat that he was wearing. Probably one or two more attacks and it would be over.

It was even worse inside the coat; Daisuke could feel that at least one or two bones within his body were broken. The sweat droplets that were mixed with his blood were running down his face that was covered by the goggles.

Daisuke noticed the numerous columns of buildings in the distance, and looked up.

Those were Ouka City’s buildings; as long as they could get there, there would be reinforcements from the East Central Division. Even for the Central Headquarters, they were not allowed to engage in other district’s areas without permission from the local Division.

Daisuke focused his consciousness and prepared to make his final wave of attacks, but a question suddenly surfaced within his mind after he gazed at the Ouka City that was in the distance and Harukiyo.

“The head director’s Annihilators are still not here…?”

The order to mobilize at once should’ve been issued, yet there was still no sign of them despite the fact that the train was about to reach the Ouka City, which was under East Central Division’s jurisdiction. Even though their target was Daisuke, there was no way they would allow Harukiyo to go roam free in front of them. As long as they were here, they would be able to last some time before arriving at Ouka City.

Harukiyo seemed to have heard Daisuke’s mutter; he opened his mouth and said that as he showed a meaningful smile with his bandaged-covered face.

Harukiyo raised his chin up with an expression as if something fun is going to happen. Daisuke felt this action of his was extremely unusual.

“Didn’t you say you were interested in Senri? Then why don’t you stop this new bullet train?”

“No matter how I think about it, if your target was Senri, then wouldn’t it be best to stop this train at once? However, Kanari Yoichi seemed to have not wanted that to happen, that’s why he stayed at the first carriage……”

As if someone was muttering their analysis next to his ear, Daisuke could feel the hidden hint slowly being revealed bit by bit.

Daisuke, who was widening his eyes, began to piece all the abnormalities that happened within this mission as well as all of his doubts together within his mind. And then, the conclusion that he came up was too unexpected that he could not help but feel chills running down his spine.

“The Annihilators… are already in front of me right…? The reason why there wasn’t any information in regard to Harukiyo in the Central Headquarters’ database was also because of this…?”

Daisuke muttered those words as if he was daydreaming. Meanwhile, the figure that was standing in front of the bewildered Daisuke --- Harukiyo, was crossing his arms in front of his chest while smiling leisurely.

“This mission… The Headquarters, from the start, had intended to corner me into a dead end, and then eliminate me ---“

“We will annihilate every enemy, and then obtain everything we want.”

Harukiyo showed a complacent smile as he interrupted Daisuke:

Daisuke gazed at the laughing Harukiyo; something felt really strange.

The teenager standing in front of him is very strong, his strength is absolutely sufficient to be ranked as an Ishu level one. But in Daisuke’s eyes, he could not help but feel that this red-haired teenager is missing something.

“You… Are you really Harukiyo?”

Harukiyo heard Daisuke’s question, and put away his smile.

The flaming giant tiger beetle roared as the flame that formed its body grew even bigger; it intended to attack Daisuke from above.

Daisuke raised his revolver, yet he didn’t aim at the flaming (Mushi), but rather at Harukiyo and fired.

However, the bullet brushed past Ume’s cheek instead.

Ume’s cheek spewed few droplets of blood as he immediately turned his head around.

The bullet that Daisuke fired pierced through the wire pole that was standing next to the track. The concrete pillar slowly fell over onto the track of the train.

The flaming (Mushi) used its uneven tusks to bite onto Daisuke, trying to tear him apart. The intense pressure was crushing against Daisuke’s abdomen.

Just then, the fallen wire pole struck against the head of the new bullet train.

Daisuke squeezed out the rest of his remaining strength, and pushed open the giant tiger beetle’s fangs with brute force. The moment when he landed onto the roof of the carriage, he charged straight at Ume who was covered by the soil dust screen.

The instant when Ume noticed Daisuke, he had already raised his clenched left fist. Not giving the mirror Mushi a slightest chance to dodge, he smashed his fist into the abdomen of the Mushi that had lost its luster due to the soil dust.

Daisuke’s strengthened fist blasted through the mirror Mushi’s body; Ume, whose body was covered by the large amount of fluid spewed out from the mirror Mushi, distorted into a painful expression.

Without any hesitation, Daisuke raised his revolver to aim at Harukiyo.

The shot rang loudly throughout the surroundings.

The bullet that Daisuke fired, without the slightest deviation, accurately hit the red-haired teenager between the eyes. Harukiyo’s slender body, accompanied by the sound of some kind of object crumbling apart, began to fall backward.

Like a doll that had its strings cut, he began to slowly fall backward onto the roof of the carriage.

However --- Harukiyo’s body that was supposed to have fallen onto the roof, suddenly stopped its falling; and then just like the rewind function of a video, it began to rise into its standing posture.

In front of Daisuke, an abnormal figure with his left arm and face crumbled apart was standing still. He then noticed a pair of dark-colored pupils were staring straight at him from within the broken body.

Before the speechless Daisuke, Harukiyo’s body began to *Para Para* split apart to two sides; a long-black-haired teenage girl could be seen inside.

Daisuke squeezed out those words with a groaning sound; that teenage girl was Harukiyo’s comrade.

Ume, who was distorting his expression in pain, jumped onto the mirror Mushi that was spewing out body fluid.

At the same time, Haruka, who was wearing Harukiyo’s remaining body figure, was enveloped completely in flame.

After she said that line with a low voice, Daisuke’s vision was covered by the soaring flame.

The clumps of flame immediately disappeared in front of Daisuke who was shielding his eyes with his arm; meanwhile, the mirror Mushi that Ume was riding also flapped its wings and flew away unsteadily.

The new bullet train that had lost control completely came to a halt.

Daisuke, who was completely exhausted, suddenly fell into a roll on the roof of the carriage. Through the hole that he blasted before, he fell back inside the carriage.

The train’s current location was just a bit before arriving at Ouka City’s border.

Daisuke trudged towards the latter cars as he used the wall to support himself.

Haji, what the hell is going on…?
Within his mind, he questioned his former supervisor.

Did you know what exactly is happening within the Special Environmental Preservation Bureau…?

Kusezaki Ume and Haruka were both Harukiyo’s comrades, if they were a part of the Central Headquarters that had not been made to public to other divisions like what Daisuke had suspected; then presumably their leader --- Harukiyo was also … ---

“I can’t let them do whatever they want…”

Daisuke clenched his teeth; the taste of blood filled his mouth.

“I will definitely live on……! I’ll live on without hurting anyone anymore…!”

Daisuke didn’t know who his enemy was, was it (The Original Three)? Or (Mushibane)? Harukiyo? Or maybe, including the Special Environmental Preservation Bureau that was supposed to be his allies, all of them were his enemies.

However, Daisuke was still alive. Even though he was trudging forward with his legs; even though the tracks that he left behind were filled with blood, he was still biting onto his teeth and lived on.

Just like what Harukiyo… No, What Haruka said. Perhaps, Daisuke was nothing but a tiny bug…. But he --- They Mushitsuki had dreams that they would never give up on.

“I’m not gonna let anyone…”

Passing through the 3rd car that was enveloped by the spider webs, he stepped into the 4th car that the normal civilians were at. All of the passengers in the 4th car had already passed out; it was probably due to their consciousness being eaten by Senri’s (Mushi).

Daisuke was panting heavily. After he arrived at the carriage where Senri was supposed to be, he became dumbfounded.

The seat where Senri was sitting before had been completely melted down from the burning flame; on the wall of the carriage, a hole with a size that could allow a person to walk through could be seen as well.

Daisuke leaned his body through the hole to see the outside, and immediately gasped.

Every view that could be seen from the location of the new bullet train was soaring with raging flames just like mirages.

In the direction of the burning city, one could see the outline of a (Mushi) that was formed by the flame, roaring loudly at the sky filled with heavy rain.

Oh, by the way, let's celebrate the release of Mushi uta 13th!!! 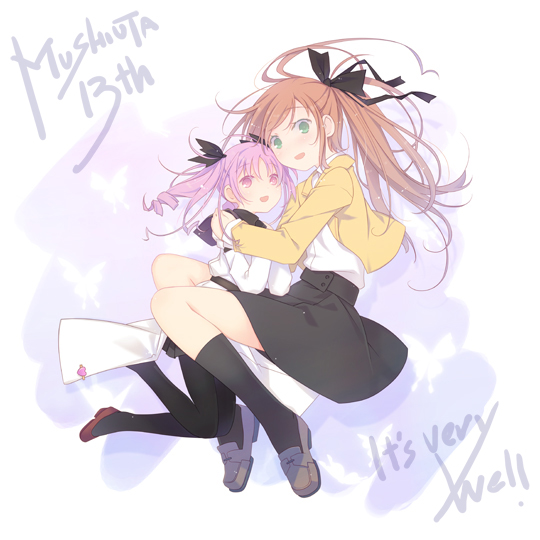