Hey~ Here's the next chapter, really short but touching =(.

Enjoy~
~am handing out tissues for those that need~-


“Rina! Pull yourself together!”

Daisuke called out to Rina who was lying in his arms.

Rina gazed blankly with both eyes; there still seemed to be traces of emotion left on her expression.

It was all right, there was no doubt about it. Since Rina was the one who Daisuke had been fighting all this time, and that was why Daisuke knows, that this was certainly not the place that she would die ---

Rina said in a very thin voice, while the ladybug behind her continued to grow larger. The eyes of the ladybug were burning with the intent to rebel as it shook its body with joy, basking in glory as it achieved freedom.

The ladybug roared once again.

Strong winds blew across the surroundings, the goggled individuals along with the members of (Mushibane) who were staring in a daze at the movements of the (Mushi), were all hit by the debris.

Daisuke questioned the young man who was approaching him as he shielded Rina from the flying debris.

Haji put away his revolver, and looked up at the (Mushi) that was growing.

“What’s the point of asking that now? Wasn’t it because of your half-assed actions that caused it?”

Daisuke was unable to rebut after hearing the words of the calm Haji.

“But she will die if this goes on!”

“And what of it? She was originally the enemy anyway! Why should you be this worried about her? Don’t tell me you …… An inspector should always maintain his distance with the one being watched. Don’t tell me, you had developed feelings that you should not be having in your profession for her?”

“…It’s none of your business.”

The young man then sighed.

“Whatever, it’s fine. Now isn’t the time to be pursuing these issues. In any case, there is only one way to save the life of (Ladybird), and that is to kill that (Mushi).”

“That’s right, the only way to save (Ladybird) is to turn her into a Fallen immediately, just like the action you took against (Fuyuhotaru). That time, for the sake of saving the life of (Fuyuhotaru) that was almost completely devoured; you killed her (Mushi), wasn’t it?”

Rina widened her gradually clouding eyes, as she held onto Daisuke’s hand and tightened her light grip.

Daisuke didn’t notice Rina’s actions; he only stared at the (Mushi) before him.

The giant ladybug had already grown larger than the destroyed station, and was still swelling up. The SEPB combatants and the remnants of the (Mushibane), were all staring silently at the sudden change of the ladybug.

Apart from killing the (Mushi), there was no other way.

Rina held tightly onto the revolver on Daisuke’s hand as he was getting ready to stand up. 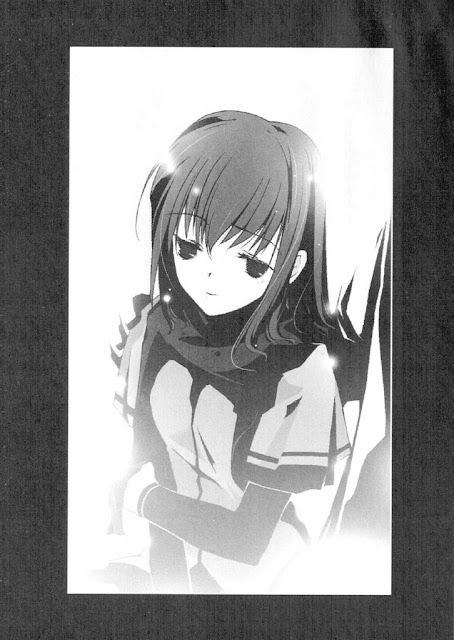 
Hearing Rina uttering out those words, Daisuke took in a deep breath.

“It will end... really quick… Just wait a while more… Will be alright… Kusuriya…”

Rina smiled. Her black eyes had already lost their vigor, but her mouth was still showing a smile of happiness. She was no longer using the tone that she had as (Ladybird) against (Kakkou), but rather the Tachibana Rina that was talking to her fellow classmate, Kusuriya Daisuke.

Daisuke gazed at the smiling teenage girl before him and couldn't help but to mutter:

“….Don’t make that face! It’s not over yet….Haven’t you always been trying to hold on? Even if you were injured during the battle with SEPB, you had never given up before! Don’t give me such an expression just because of such a small matter! If you want to smile, you should at least smile like you were when drawing me……”

Rina whispered in a soft voice, she seemed unable to hear the words that Daisuke spoke even though he was right beside her— and even though the teenage girl was looking directly at Daisuke's face, she was unable to see his face clearly.

“…. I beg you…please become her place of belonging where she can stay….You are the only one she can rely on……”

Near Rina’s eyes that were gradually losing its luster, a tear streaked down her cheek.

Daisuke bit his lip, and recalled the last smile of Shiika that he saw.

That was what Shiika had said.

Rina cut Daisuke off, and whispered once more.

Rina smiled as she continued, but Daisuke was unable to make out what she was saying.

Just when Daisuke replied, the giant ladybug gave out an ear splitting roar.

Thank you for reading~
Feel free to leave comments for any questions or feedback~
Posted by Wing at 9:08 PM