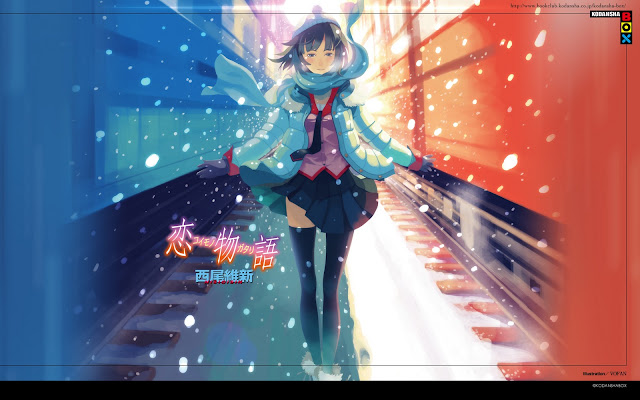 
This is more of a review, so I am lazy to slap in a summary. I am pretty sure you can get something if you google.

Anyway, Nisio Isin starts off by trolling us with the narrator. Of course, with this book supposedly focused on Hitagi, you would at least expect it to be her doing the narrating, or Koyomi. But of course, being the master troll as he is, Kaiki is the narrator instead. For those who don't know, Kaiki's the con-artist who got Senjougahara's family in the wreaked state, and also will be one of the important characters in Nisemonogatari's Karen Bee.

However, that turns out pretty well. In fact, it's really interesting to see the real reason for him conning Hitagi, as well as the reason for him accepting her request to con Nadeko so that she and Koyomi will not be killed.

Contrary to the other books, this volume talks really little about Koyomi, and instead focuses more on Hitagi (and Nadeko). As the title suggest, the book explores deeper into the love relationships between the characters. It's kind of impressive to see the things Hitagi is willing to do to save Koyomi (and that includes prostituting herself to raise money to hire Kaiki). In the book, Kaiki has always compared the couple to that found in the tale <The Gift of the Magi>, because of the depths they are willing to go for the other party in secret.

The other bulk of the story focuses on Kaiki dealing with Nadeko so that he can trick her into thinking that Hitagi, Koyomi and Kissshot are somehow dead. From that, we sort of get to know more about Nadeko (from his perspective), and that's probably the last of what we will know of her. Kaiki failed in tricking her, though he did manage to remove the talisman in her body to revert her back from a "god" to a human. Surprising how Nadeko's wish is to become a mangaka.

It's kind of intriguing to see how Kaiki offered to help Hitagi, despite the little amount of money he received from her, as well as the animosity that should be between them. However, turns out that he actually likes her, though he is extremely dishonest about it (being a con-artist, he sometimes tricks even himself). The whole fiasco about him ruining her family was actually his attempt to help her, since he realized that her family was already beyond hope, and that he thought it would be good to provide Hitagi an outlet to escape to, in the form of the crab. Turns out that Hitagi's first crush is Kaiki too, and it also seems like she sort of knew Kaiki's intentions behind him ruining her family, as she did say in the book that he has never once lied to her. Well, sort of a cheesy attempt to make him not look as bad as he should. Can't say that didn't work out well though.

Kaiki also asks Koyomi to keep away from Nadeko, because he will only cause her more harm. Just like how Kaiki made Hitagi weaker, but Koyomi brought her back to her feet and made her stronger - the reverse holds true for Nadeko. Nothing good will come out of Koyomi's constant pampering of Nadeko. That sort of explains why Nadeko is not mentioned at all in Hanamonogatari. She's not dead, so fans of hers can probably rejoice, but we probably won't get to see her ever again, just like Hachikuji.

Of course, being a story about love, it does touches very little on Koyomi and Shinobu. Apparently, the talisman which Nadeko swallowed was given to him as part of a plan to turn Shinobu into god, so that she can restore balance to the chaotic town. Turns out that Koyomi will never agree to that, and I pretty much doubt Shinobu will want to end her special ties with him either.

Hanekawa also made her appearance, and I must say she has became quite impressive, to the point where Kaiki compares her to Gaen (Kaiki and Meme's senior), the know-it-all. There's also the interesting fact about how Hanekawa's hair is half black and half white, which she dyes black so as to cover up the white areas. Perhaps she still has some powers of her cat oddity is left in her? I am not quite sure, but I am relishing on the prospect of her fighting in her recovered form, or perhaps even pitting herself against Gaen.

The mystery of Ougi gets deeper as well. We do know now that Meme has no family, so why did he/she claims himself/herself as Meme's nephew/niece? That's something for us to see.

Well, Koi is supposed to be the last book in the monogatari series, but the author has added in three more titles. Hope he can resolve everything by then. As for this title itself, I am originally quite apprehensive on how a title narrated by Kaiki will work out, but it exceeded my low expectations I had for the book. It's not quite I had expected, but it works out pretty damn good, and explores the 恋 theme pretty well. If nothing else, it's sort of refreshing to see a book that focuses heavily on Hitagi, whom we do not get to see much after Nisemonogatari (Karen Bee).

And as usual, my updated ratings of the volumes in the series.

That's all to the brief review. Here's to more Shinobu-centric titles.
Posted by zgmfx09a at 10:00 AM