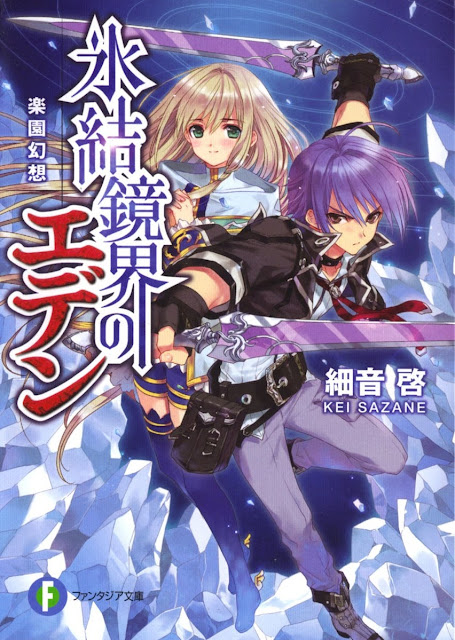 It is a world where two contrasting/resisting types of energy existed. Human beings, who are based on the positive energy, cannot live on the land of the world corrupted by the negative energy. Their only hope of living lies in a floating continent, protected by a barrier of the positive energy maintained by the Queen and her Priestesses in the palace to repel the onslaught of the creatures of that came from the negative realm.

Sheltis and Ymy are childhood friends who enrolled into the palace, with Sheltis training to be a warrior, and Ymy to be a Priestess. However, during one of the missions two years ago, Sheltis dropped into the negative realm due to an accident. Strangely, for what should amount to sure death for anyone else, Sheltis survived, but in the process, he lost his memories of the incident, and had all of the positive energy in his body to be replaced by negative ones. Due to the unique first-time situation, he was expelled from the palace, and was this separated from Ymy.
Two years down, and Ymy successfully became one of the five Pristestess of the continent, while Sheltis went on to live a normal life in the city. However, when the creatures launched a sudden surprise attack at the palace of the floating continent, everyone was taken aback. With the palace shorthanded by the overwhelming forces, Sheltis, a former ace of the palace warriors, decided to make a trip to the palace to ensure the safety of Ymy, and perhaps to see her for the first time in two years, and quite possibly their last forever.
----------
It has been a while, but it has been a while since a novel got me hooked like Hyouketsu Kyoukai no Eden did (since Denyuuden and Monogatari). I've actually completed two volumes within 3 days (given my schedule, is a pretty impressive rate), and make me like it enough to want to own actual copies of it.
It's a rather typical fantasy story in terms of plot, I must say. However, the author tells the story really effectively, and the story makes me feel good and filled with anticipation while I am reading it. There's no gaping holes in the plot, no cringe-worthy cliches (for me anyway), no characters that makes you wanna punch them through the pages. Aside from the technical terms, things are kept simple and clean, and yet it has enough mystery to keep me intrigued. In short, the novel's plot was nothing groundbreaking, but the execution is clean and the author delivered the goods in style.
Illustration is great, which is one of the reason the novel caught my attention in the first place. I think Kasukabe Akira should be more famous for his josou works, but surprisingly the character designs are impressively done, even for the guys (Sheltis still looks a little feminine, but that is part of the character design as well).
The characters are all rather likable, and there is none that gets on my nerves for now. In a sense, Sheltis' harem is kind of growing by the end of book two, but you just cannot see him ending up with anyone else but Ymy, unless the author pulls a sad end. Thankfully, this novel does not seem to be those rabu-rabu types, with all the girls lusting for the MC, so it's fine. To balance the sexes a little, a considerable amount of attention actually goes to the best friend of Sheltis, Leon, who forms a rather formidable bromance with the MC.
And surprisingly, the character I liked the most is actually a "crystal machine" as they called it. Goes by the name of Iris, she is a sentient machine belonging to Sheltis, and takes on the combat-assisting role. Typically knowledgable, cheeky and talkative, she shows her rather sensitive side occasionally as well. Her human-esque personality intrigues me, and I'll love to see her getting closer in relationship with Sheltis (will there be love?)

One thing great about this work is that it works my imagination rather well with the combat sequence, which means it should make a good anime out of it. There's also a drama-CD made, and the characters are all voiced by notable seiyuus. Together with 6 volumes of materials to work on (currently), it is a great signal that the anime version may be coming to us in the not-too-far future.
However, while reading the novels, I am also looking to see if it will be easy to work on translating it. I am not aiming too far away for now, but if there is ever going to be a next project that I'll work on, in the current stand, it will either be this series or Kono Nakani Hitori Imouto Gairu.
The hard part comes with the huge array of technical terms used in the book. I've went really slip short in the summary above, but there's really a lot of special terms used that will be a translation nightmare for me, since I don't really understand Jap enough to read Kanji off the bat, and wiki does not have Hiragana/Katakana pronunciations for all the terms. 沁力 (the positive energy), 魔笛 (negative energy), 天結宮 (palace), 幽幻種 (creatures, or Yuugenshu??), 穢歌の庭, 千年獅 (Sennenshi??) are the major headache causing ones I've found up to volume two. As for the rest of the terms, the Katakana pronunciation are available, thankfully. I'll see how it goes regarding this.

EDIT: After some discussion with Drkmerc and checking of dictionaries, I think I've got most of the pronunciation I needed. Whether they are correct is another matter.


All in all, it has got my attention. I won't go about comparing it with Denyuuden just yet, but it has kept me interested enough to consider to translate it. Still, I am focusing on Onii-Ai for now, and I don't want to be too ambitious. Obtaining the two translated Chinese hard-copy is the top priority for me now, and I'll decide on what to do later.
Posted by zgmfx09a at 12:44 AM

Email ThisBlogThis!Share to TwitterShare to FacebookShare to Pinterest
Labels: reviews